As a person who for more than two decades worked as a real-life sworn peace officer, I know the importance of law enforcement. In particular, if laws are on the books, they have no effect unless they are enforced. In order to discharge their responsibilities, law enforcement organizations often operate on two levels: the visible plane, with marked cars and personnel in uniform and the surreptitious stratum, with unmarked cars and persons dressed in “plain clothes.” On both levels, the police vehicle, marked or unmarked, plays a critical role in enabling law enforcement agencies to fulfill their legal responsibilities. I will return to this shortly.

As most of you know, Wayne Watson and his administration continue to make valiant efforts to destroy any dissent on this campus and to selectively punish those persons who openly disagree with them. They have been unsuccessful in stifling open discourse to this point. Although Watson has made a herculean attempt to dictate standards of "civility" on the Chicago State campus, his project has been thwarted by poorly conceived policies and a lack of robust enforcement for those “laws” that are already on the books (see the Chicago State University “Code of Excellence”). It seems that a number of persons at Chicago State possess no will to enforce Watson’s various imperial fiats. This is a problem for our Napoleonic president.

However, Watson and his administrators have had some success in their selective enforcement efforts, especially against the most vulnerable elements of the university community. Watson has frequently demonstrated an arbitrary and capricious application of the “law” that only applies to his “enemies.” Undergirding this practice is Watson’s vision of “integrity” which to him apparently means total agreement with anything and everything he (Watson) says. Simply put, if you are in with Wayne, you can engage in any kind of behavior without consequences: lying--no problem; cheating--no problem; obtaining a degree under false pretenses--no problem; abusing staff--no problem; accusing opponents of all manner of degenerate behavior--no problem. So, the “laws” Watson wants enforced apply only to his foes. A number of persons obviously find that kind of selective enforcement problematic.

For an administrator with a manic desire to micro-manage--someone imbued with an almost religious belief in vindictiveness and retaliation--this condition must be intolerable. The only solution might be to do it yourself. The question is, how? Well, our resourceful leader may have found a way. At least he has the requisite vehicle to begin his law enforcement efforts.

There are a number of statutes that delineate what constitutes an emergency vehicle in the state of Illinois and how certain colors of lights are restricted to those vehicles. These laws are from the Illinois Compiled Statutes:

These statutes detail the prohibition against the operation of red and blue lights except for designated vehicles: 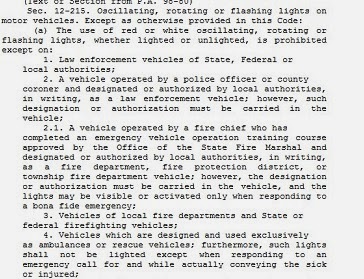 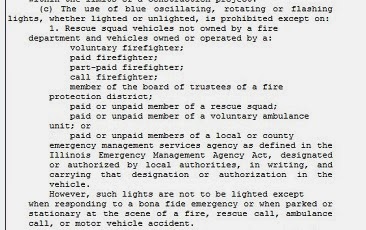 Now let's take a look at the vehicle Watson often drives. The U prefix on the license plate marks the vehicle as a state-owned vehicle, although not as a designated police vehicle (although it is entirely possible that through some loophole, the SUV receives that designation--remember where we are after all). Anyway, take note of the car's grill: 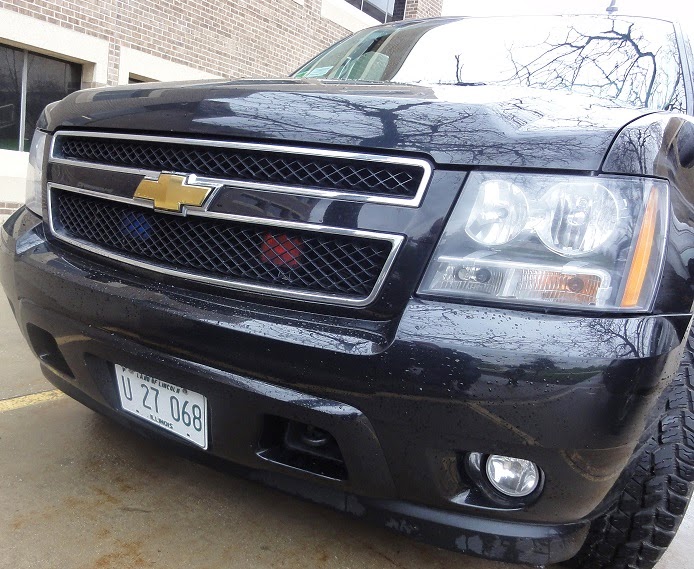 As you can plainly see, the SUV Watson frequently drives is equipped with both blue and red lights behind the grill. At least for me, this raises a number of questions Why does the president of a university require emergency lights on his vehicle? Does he plan to make traffic stops on or off campus? Is the vehicle also equipped with a siren? Perhaps he can use the lights to blow through those pesky red lights and stop signs that litter the city. Or maybe he plans to begin enforcing the various codes that his underlings are unable or unwilling to enforce. Imagine being pulled over by Wayne Watson after you engaged in "uncivil" discourse at a meeting or in some other venue. Imagine the consequences of your "incivility," the punishment for the trauma you inflicted on innocent liars and cheaters for example. These musings give rise to other questions: what authority does Watson possess that allows him to operate that kind of vehicle? Is he a junior G-man? is he a junior Deputy Sheriff? a junior policeman? Although I am endeavoring to obtain answers to some of those questions through the Freedom of Information Act, they remain unanswered.

Perhaps it is time to look at Wayne Watson in a new light. Pay close attention the next time you see him, notice if he flashes any identification. For normal operations you might see something like this: 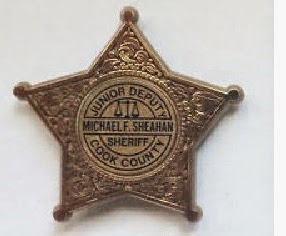 However, if he's "deep undercover" he might display a different badge (only if forced to, undercover cops are always reticent to identify themselves). Perhaps something like this (note especially the "special investigator" designation): 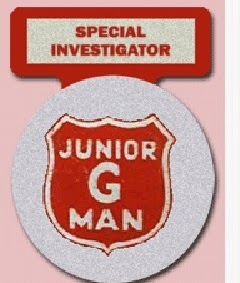 So, be on the lookout for Wayne in his new role as the Sheriff of Chicago State. That this "university president" is becoming more of a caricature everyday and has no compunction about exposing himself to additional ridicule for being a wanna-be policeman by driving a vehicle equipped with emergency lights seems inexplicable to me. I can tell you that virtually all law enforcement professionals would find this situation both laughable and pathetic. Someone please save us from this never-ending farce.
Posted by Robert Bionaz at 6:31 AM