In 2009, a commission appointed by Illinois Governor Pat Quinn reported on the state of corruption in Illinois. Does this description resonate with anyone?:

"The endemic nature of corruption, coupled with employees' low morale . . . has led to a sense of learned helplessness among many in state employment. In other words, state employees come to believe that corruption is a fact that they cannot change or challenge." The report went on to say: "Talented public servants may choose not to pursue employment in state government, while those who do so may be turned away in favor of the wrong candidates hired for the wrong reasons." In addition, "[m]any honest, hard-working state employees put forth their best efforts each day without acknowledgement, only to see less-qualified political cronies land coveted promotions. . . In short, the culture of corruption has become more than an embarrassment to the People of Illinois; it’s an impediment to their receipt of honest, effective public service." (available here: http://www.uic.edu/depts/pols/ChicagoPolitics/anticorruption.htm)

As the search for a new Provost at Chicago State unfolds, it seems a propitious time to examine the activities of one of the persons who has enabled Wayne Watson to advance his poisonous agenda: Renee Mitchell, our erstwhile “Director” of Human Resources. This examination reveals behavior that has served the interests of Watson in numerous ways: for example, signing off on dubious hiring and promotion decisions, creating job announcements that are almost laughable in their lack of rigorous qualifications and producing “investigations” that whitewash administrative misbehavior. During the current Provost search, Human Resources has actually drafted policies–to ensure that a Watson crony gets the job–that seem to contravene Illinois state law.

When Watson “officially” took over the presidency at Chicago State on October 1, 2009, he obviously realized that he had to pack the place with cronies if he was going to be able to realize his “vision” of destroying the university. As previously described on this blog, he hired a number of insiders early in his administration, including Renee Mitchell. Mitchell began at Chicago State on October 5, 2009. According to her resume, she came directly from a Human Resources management position at CNA Insurance in Chicago. Coincidentally, Cheri Sidney also worked in a clerical-support position in Human Resources at CNA during Mitchell’s tenure at that firm. Within five weeks, Mitchell had participated in the creation of an administrative position for Sidney and had signed off on her hiring, despite her obviously falsified resume and lack of management experience. In 2010 and 2011, Mitchell approved promotions and raises for Sidney and also in 2011, Mitchell and Sidney served on the university search committee that produced a job announcement so vague that it brought us Angela Henderson as Vice President of Enrollment Management–despite her woeful lack of credentials for the position. 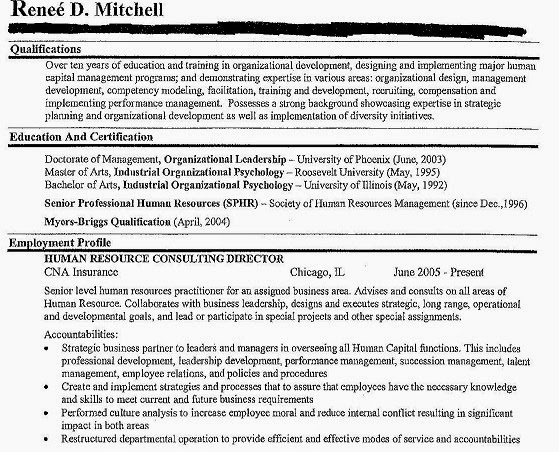 Thus, by mid-2011, Mitchell had solidly established credentials as a “good soldier” in the Watson regime. In June 2011, Mitchell’s Human Resources Department participated in drafting new search procedures that dramatically altered the conduct of faculty searches and inserted the president directly into the process. These search policies remain in place with the latest iteration coming in March 2013.

The existence of even these watered-down procedures became a nuisance in 2012 as Watson wanted to rig a search to hire two of his cronies as faculty in the Criminal Justice Department. Again, as detailed on this blog and elsewhere, Watson did just that, hiring new faculty in that department after a search conducted by several administrators and no faculty–a direct violation of Chicago State’s own search procedures as outlined in the Human Resources and Legal Affairs policies. After the improper nature of the search resulted in an outcry from a number of faculty members, the administration assigned Mitchell to investigate itself. Not surprisingly, her ridiculous report found absolutely no administrative wrong-doing, although it offered recommendations designed to ensure that the kind of search that had occurred in Criminal Justice would not happen again.

Having proven her loyalty to Wayne Watson, Mitchell reaped her reward. On January 1, 2013, Watson granted her a 21.4 percent raise from $119,484 to $144,996. Later in 2013, she again demonstrated her loyalty to Watson and his cronies. When I advised Mitchell of the lies on the resumes/applications of both Cheri Sidney and Tyra Austin, Mitchell responded that Human Resources had already dealt with the issue. Although this may seem like a trivial matter to persons outside the academy, most people at Chicago State take the matter of valid credentials seriously. There are a number of administrators working at this school after having lied on resumes/applications by claiming degrees and experience they simply did not possess. Mitchell herself is listed on the Chicago State website as “Renee Mitchell, Ph.D.” Ms. Mitchell does not, in fact, possess a Ph.D. She earned a D.M. (Doctor of Management) from the University of Phoenix in 2003. The difference is significant. First, the Ph.D. is a research degree and the requirements for that degree are far more rigorous than for a professional doctorate. Second, It takes longer to get a Ph.D. than most other doctoral degrees and it is so difficult to obtain that Angela Henderson had to cheat to do so. The mention of Angela Henderson brings me to my current concern: the possible illegality of the search now being conducted for university Provost.

The Illinois State Legislature created something called the Chicago State Law (110 ILCS 660/) that specifies the composition of the Board of Trustees and lays out the various responsibilities and duties of Chicago State University. Among the salient points of the law are:

“Sec. 5-45. Powers and duties. The Board also shall have power and it shall be its duty:
(1) To make rules, regulations and bylaws, not inconsistent with law, for the government and management of Chicago State University and its branches;
(4) To issue upon the recommendation of the faculty, diplomas to such persons as have satisfactorily completed the required studies of Chicago State University . . .”

“(110 ILCS 660/5-150)
Sec. 5-150. Faculty and staff contact with public officials. All faculty and staff members of the University are free to communicate their views on any matter of private or public concern to any member of the legislative, executive, or judicial branch of government, State or federal, without notice to or prior approval of the University, so long as they do not represent that they are speaking for or on behalf of the University.”
(Source: P.A. 96-147, eff. 8-7-09; 96-1000, eff. 7-2-10.) 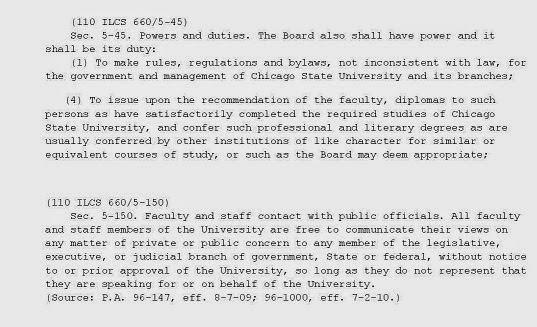 Finally, the Chicago State Law contains a prohibition on the use of search firms, except in specific instances and for “justifiable need.” This language is standard and appears verbatim for every state university:

Here is the problem Chicago State’s Human Resources Department. In my estimation, the policies it has created far exceed the latitude permitted under state law. As the legislative prohibition charges the university with “implementing a policy,” and outlining “qualifying criteria” by July 1, 2013. Here is Chicago State’s “policy” (the statue cited is actually from the Western Illinois Law): 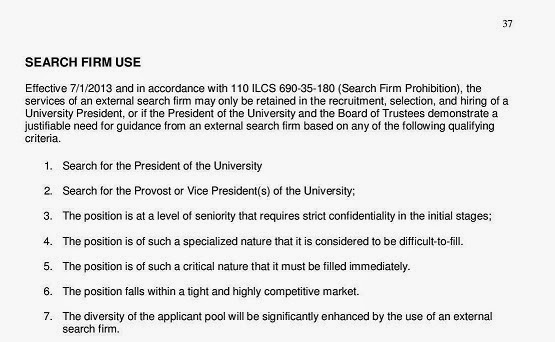 I intend to seek the opinion of someone in the state more qualified than I am to judge the extent to which Chicago State’s search firm policy violates state law. If the university can use search firms for Vice Presidents, why not Deans? Department Chairs? Most important, just what is the “justifiable need” the board and president have agreed upon to bring us the Hollins Group and their $100,000 contract to find a Provost for this school? The same firm that brought us Wayne Watson is now orchestrating another search for university Provost. Not surprisingly, Renee Mitchell is a member of the university search committee for this position. Will history repeat itself? Will Wayne Watson get his crony hire? Will Renee Mitchell help? Will the disgraced Angela Henderson be anointed as Chicago State’s new Provost? Will Chicago State continue on its death spiral while unqualified persons continue to draw exorbitant salaries for failure? We will soon find out. After all, these people must protect their six figure positions. I certainly would not want to bet on the integrity of anyone involved in this process. How about you?

Posted by Robert Bionaz at 7:21 AM