#The Faculty Is Always Wrong

So now the administration is worried about the 9 month employees costing them money during the summer. To wit the below missive from the incompetent provost. 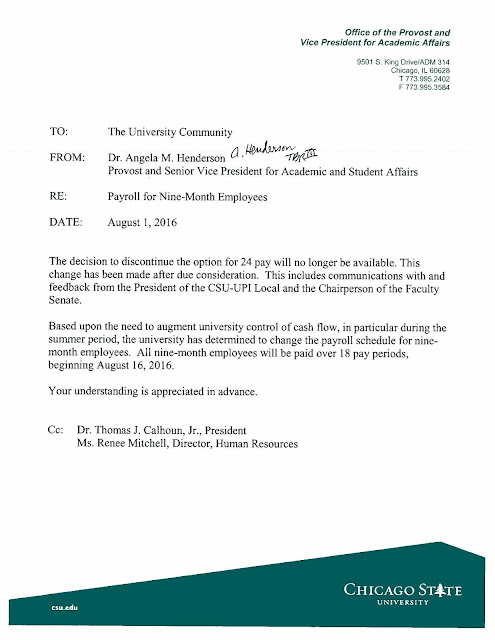 If the worry is running out of money, then put all employees on 18 pay periods. If the worry is that in running out of money UPI Local 4100 would sue the university, that argument is specious and quite frankly stupid. If the university runs out of money why would the union sue the institution that has no money? The union would sue the State of Illinois directly. No loyal readers, this is just another attempt by inept administrators to screw the faculty. The allusion to consultation in the memo is telling as well. Neither I, as the Faculty Senate President, nor my esteemed colleague, Dr. Bionaz, as the Union President agreed with this suggestion but as usual at Chicago State, the faculty is always wrong. That might become our new tag line; CSU: Where the Faculty Is Always Wrong. For reasonable people who budget for twelve months a year, this is quite a disruption and now there will have to be separate payments for health insurance. Since we work in a state that dysfunction is the motto, how many faculty will inadvertently lose their health insurance during the summer because of this single decision of these inept and quite frankly, spiteful and pernicious, administrators?

I would love to know when there is to be some accountability for the clown car administration (#CSUclowncar) that finds the time to do this nonsense but can't increase enrollment or decrease audit findings, or collect keys or property from fired employees, or pretty much anything that has to do with administration of a university. It's long since time for this farce to end.
Posted by Phillip Beverly at 10:43 PM