So loyal readers, most you know about the dark cloud that has hung over the university since February 4th, when the Board of Trustees declared a state of financial exigency. That cloud was made worse when the Board abandoned all common sense and in an unprecedented crisis removed executive authority from the university president and ceded it to the Management Action Committee. This step is unprecedented in the area of crisis management. Hierarchical organizations need to have one decision maker, in this case the university president. But the board went in the opposite direction and created a situation that undermines executive authority. I have read several texts on management and leadership and not one of them ever indicated that the chief executive should be undermined in such a way during a crisis. The Management Action Committee therefore, must have been created for some other more nefarious reason. The four headed presidency that it has created has had disastrous results for the institution, primarily because three of the four members of that committee are profoundly incompetent and not working in the best interests of the institution.

That said, I was asked recently what the faculty position on the exigency was and what the faculty was  prepared to do to right the ship as it were. My response was the following. The Faculty Senate has met and generated a request and draft resolution for the Board of Trustees to terminate the exigency and return the university to normal operations. The Senate took this action following a review of the existing exigency information provided by the Board of Trustees. The Senate is also prepared to communicate that request to the media so that the question will never be asked, where were the faculty. The faculty of the university are there to protect the higher ideals of the institution from assault by those who in the grand scheme are really just transients. The transients include board members and senior administrators, those most likely to wreak havoc upon an institution. The Senate believes that it is in the university's long term interest to end the exigency, do a damage assessment of the exigency, begin repairs on the damage sustained as a result of the incompetence of the previous administration and its holdovers in the current administration. Someone asked me, "when is the new president  going to bring in his team, you know like every other university president does?" My reply was that hopefully it would be as soon as possible. A summer cleaning would be a really good idea for the university.

So for transparency's sake, I post the memo and the draft resolution sent to the Board. Of course I have received no response from the Board on this request. It's the giving of the finger, that my colleague Dr. Bionaz referred to in a previous post. 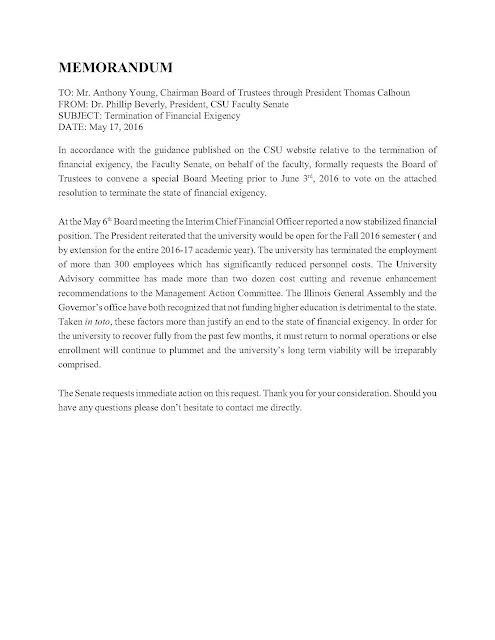 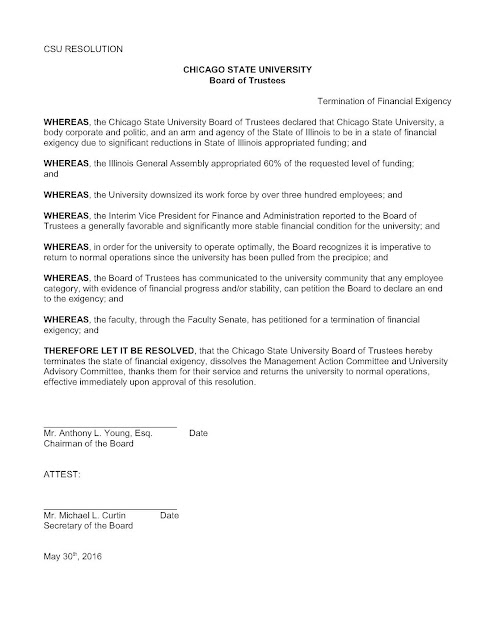 The ball is now in the court of the Board. Maybe some interested journalists will ask the Board why exigency is still necessary. Or maybe some interested legislator will ask why the university was put through this process in the first place, especially since no other public university declared exigency. This situation has generated many more questions for me than it has answered.
Posted by Phillip Beverly at 1:33 PM