The Crowley Case Comes To A Merciful End

So this humble source of information has followed the James Crowley lawsuit for the past several years. I can now report that it appears that this case has come to a merciful end. Today the Illinois Supreme Court denied the defendant's appeal and declined to hear the case. The Supreme Court will issue its mandate to the Illinois Appellate Court on June 29th and the Appellate Court will issue its mandate within about 2-4 weeks after that to the Circuit Court for final disposition of the case. 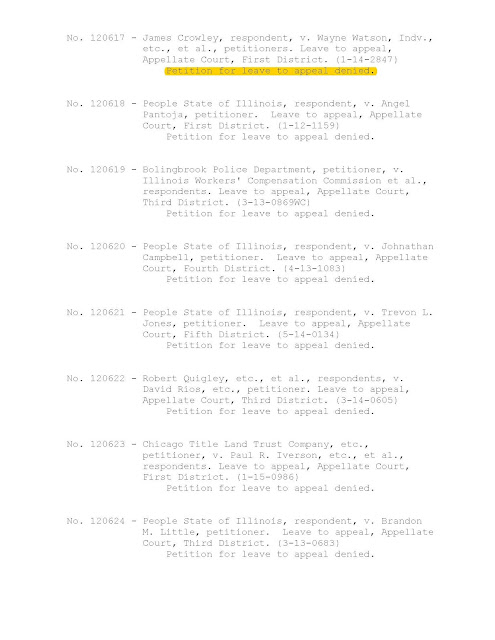 It appears that the legal system in the State of Illinois believes that employees who follow ethics laws and rules should not be retaliated against by unethical superiors. Too bad the former administration mouthpiece isn't here to tell the world that the university will win on appeal and that insurance will cover the costs of this avoidable legal action. I don't believe insurance will pay for $2 million in punitive damages. At the end of the day however, it falls to the Board of Trustees to explain why they chose not to remove a failed president from office and minimize the damage to the university and the cost to the taxpayers.

Thanks Board. Another $5 million wasted because you wouldn't do your job.

And congratulations to my former/returning?? colleague Jim Crowley for persevering through this arduous process and to his distinguished counsel for exposing the true nature of the Watson regime.
Posted by Phillip Beverly at 2:33 PM