Western Illinois University set to cut Philosophy, African American Studies among others. Our turn is coming.

Western Illinois' Board of Trustees will be voting on closing programs at its next board meeting soon. See the article from the Chicago Tribune of a few days ago.

And what of us? Since the firing of CSU's lecturers in early May, the silence from our administration about our programs and tenured and tenure-track faculty has been deafening. No doubt meetings are taking place and deans and chairs are wringing their hands --would that they had wrung some administrative necks a few years ago when we might have had a fighting chance at survival. Past practice assures us that the deans and chairs will be left in the dark until the very last minute about the details of the program closures and the faculty firings spearheaded by the three-headed monster working in tandem against President Calhoun. They will then be issued their orders to carry out the beheadings.

The legacy of the imperial presidency of Wayne Watson and his toadying Board of Trustees led by Anthony Young and Nikki Zollar has brought CSU to a fitting end. How does it feel on the eve of the massacre? How many of us will be "lucky" enough to be standing before a half-empty classroom in September? The silence of too many for too long and the many, many who collaborated on and off campus with the machine politics that Watson wreaked on this campus put us on the path that has led us to where we are now. In true machine fashion the personal trumped the common good. And yet, it was not the politicians who allowed Watson to seize and centralize power over hiring, firing, the doling out of money (once the purview of deans) or who permitted Watson's presidential overreach into curriculum. They take the blame for permitting the shenanigans with ethics and the interference with agencies that were supposed to oversee this educational enterprise. Seeing past the smoke now, too many blind eyes were cast, too many of us hoped to protect our turf, and too many simply hoped to wait it out without having to be involved.

The knives are out on the 3rd floor of the Cook building as the least competent have been left in charge through the last shenanigan of "financial exigency" to carve up the university and determine what shreds to leave for Bruce Rauner to finish. Rauner and his ilk are feasting away on Watson's legacy and our failure to battle it. 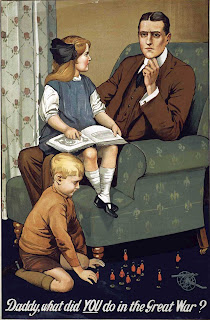