To Advise or Not To Advise

So as not to leave the impression that faculty are not diligently attempting to preserve the integrity of the university, your humble narrator offers the following for your consideration.

The university provost had an idea last year to prevent faculty from doing student advising. The thought behind that idea was never clearly articulated to the faculty in any coherent fashion so I am left to conclude it was because faculty advising was too expensive for the university. That is odd given the number of faculty who came perilously close to not making load for the year. I also imagine the underlying reason is a fit of pique on the part of the provost for being challenged by the intrepid UPI Chapter President who dutifully reminded her that there is a formula for compensation and contractual language around advising and the university's students would be best served by having faculty do advising and administration adhere to the contract. For the nearly 25 years I have been at the university, faculty have done student advising. Faculty know their programs, they know the nuances of the curriculum and most importantly they know their students. Lo and behold the most unqualified provost in university memory decides that she knows better. Suffice it to say, advising for our students has been worse than disastrous. One of the now terminated professional advisors told me that he was advising in disciplines he knew nothing about. He knew he was mis-advising students and yet no one could do anything about it because the provost had decided that she knew better and would brook no dissent much less any substantive discussion on the matter.

The Faculty Senate, on behalf of the faculty, closely monitored the advising situation and finally responded after informal communications went unheeded. Below is the text of the request put forth officially by the university’s faculty. Beneath it is the response from the provost’s office. You might notice the prompt response of 32 minutes but there has been no response since then. 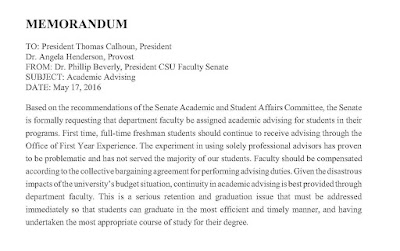 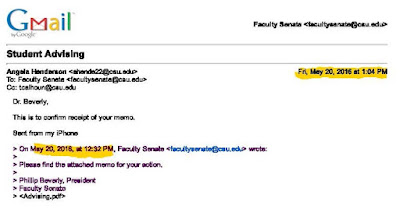 None.
Given the centrality of advising to student success, I would imagine this would be an issue of critical importance. Sadly, it is not.
The professional advisors have all been dismissed, the advising center has been moved once again and the responsibility has fallen on an office that has never done advising beyond it’s freshman student advising responsibilities. Another fine mess you’ve gotten us into. How can a university that refuses to correct the narrative of its own demise be expected to recruit, enroll, retain, advise and graduate students if simple processes like advising can’t be managed appropriately? I would posit that some significant portion of students not returning would list as the reason the quality and nature of academic advising. The university has lost students as a direct result of the ill conceived decision made by the provost. And the Board rewards that incompetence with.......

It begs the question of why the chief academic officer, the person responsible for protecting the academic integrity of the university finds it so difficult to heed the reasonable requests of faculty, all of whom are more knowledgeable about the academy than she is. Is it the appreciable gap in knowledge that so frightens her and inevitably leads to requests for off line meetings and sharing? Yet for all of her well documented failings, enrollment declines, plagiarism, record number of employee grievances, absence of planning for the financial exigency, multiple missteps in the execution of the financial exigency process, the advising debacle, the ill fated attempt to shut down the Faculty Senate just to name a few, I cannot lay responsibility for her failure solely at her feet. Granted, she is responsible for her actions AND the former failed president and the current Board of Trustees must bear the bulk of the responsibility for putting a totally unprepared and inadequate administrator into a position of responsibility that anyone with five minutes in the academy would know was a recipe for failure. So with failure upon failure what possible justification exists for her continuing to damage the university?

I can only conclude there is some relationship between the provost and one or more trustees that precludes them from terminating her employment. The nature of that relationship should probably be explored by agencies with subpoena powers who can determine the full nature and scope of a relationship that has been so damaging to the university. It’s almost as if the Board has a mission to make the university so ineffective, the only alternative is to shut it down.

Oh but these are only summer musings of your humble narrator. What might the Board do next week at a totally unnecessary meeting? Terminate the exigency per chance???

I think not. It will be business as usual or should I say failure as usual.
Posted by Phillip Beverly at 6:42 PM