We Have Money For Some Things: Wayne Watson and His Lawsuits

Along with at least $200,000 we have recently spent on new administrators, the university finds other important places to spend our (according to Watson's numerous memorandums) dwindling resources. Legal fees to defend various members of the university administration against a number of lawsuits are important and thoroughly justifiable expenses.

Recently, after more than three months of unnecessary delays caused by the university’s legal department, I received a response to my FOIA request for legal contracts and invoices. The process of acquiring this material as well as the information itself sheds considerable light on how Chicago State discharges its responsibilities as a public institution.

On March 19, 2015 at 9:19am, I sent my FOIA request for copies of the legal contracts and invoices for five separate law firms (Laner Muchin; Husch, Blackwell; Pugh, Jones; Smith, Amundsen; and Fisher, Phillips) involved or formerly involved in personnel investigations or ongoing litigation against Wayne Watson and company. The Illinois Attorney General had declared this type of material public information, subject to FOIA, in a 2014 binding opinion (14-002). When I sent the FOIA request, I fully expected to hear nothing since the university’s legal department makes a habit of ignoring my FOIA requests (according to my unofficial records, the university has failed to respond to 20 of 35 requests I have made since August 2013).

To my great surprise, I received an e-mail from Patrick Cage seven minutes later denying my request and citing attorney-client privilege as the reason the requested information was exempt from disclosure. I immediately appealed Cage’s denial to the Illinois Public Access Counselor. In April, the Public Access Counselor had at least two fruitless conversations with the university’s legal department about the request. On May 6, the Public Access Counselor sent a letter to Chicago State indicating that despite the two telephone conversations and requests for information supporting the university’s denial of my FOIA request that “the University still has not provided a written response or copies of the requested records to this office.” The letter continued by saying: “we renew our request for those materials, and ask that the University provide them expeditiously.” This letter apparently moved the university to provide the requested documents, which it did on May 13.

After absorbing the lesson in civics provided by the giants in our legal department, I was able to turn my attention to the records they provided. The information paints a picture of a university administration spending huge sums of money on litigation caused by improper administrative actions. The information also demonstrates how the university withholds information in required reports to the state legislature. The amount of money the university spends on legal contracts and the relative absence of this information in reports to a group ostensibly responsible for safeguarding Illinois taxpayers suggests that the university is involved in an attempt to hide the extent of its reckless spending from elected officials.

So how much does the university actually claim to have spent on these (and other) matters and how much of its expenditures did it report to the Illinois State Legislature?

Based on the invoices I received from my FOIA request, Chicago State spent $250,000 on Pugh, Jones and Johnson, and $26,518.3 on Laner Muchin. Ostensibly, these are the final expenditures for these two firms. Ongoing expenses include $43,009.86 for Husch-Blackwell and $154,435.40 for Fisher-Phillips. The total expenses come to: $473,963.40. Given the absence of at least two major law firms in the Crowley appeal and in the Peebles case, this figure seems suspect.

For the individual firms, as far as anyone in the Illinois legislature knows, through the end of 2014, we have spent a total of $130,200 for Pugh, Jones and Johnson (actual invoice totals $250,000). For Fisher-Phillips, the university has reported expenditures of $2800 with actual invoice totals of $57,302.70. Only Laner Muchin is accurate, with the university reporting $26,500 in expenses on actual invoices of $26,518. This seems like either terrible accounting practices or willful misstatement of financial facts.

The upshot of all this is simple: the Watson administration is costing Chicago State dearly. Watson and his cronies have wasted millions of taxpayer dollars in legal expenses for behavior that has already in one case been found culpable with resulting enormous damages. Frankly, there is no end in sight. In the last ISL report, the university itemized just over $787,000 in contract legal expenses in calendar 2014. So far in calendar 2015, the expenses for just the two firms involved in ongoing litigation total just under $200,000 (invoices through May 6, 2015), with hundreds of thousands of dollars in legal fees still to come. I guess our Board of Trustees thinks Watson and his friends are all worth it. Here are copies of the Pugh, Jones and Johnson contracts and the invoices provided by Chicago State. These contracts are between the Board of Trustees and the individual firms. Do the members of the board know how much the Watson administration is costing this school? Do they even care? Does anybody care? 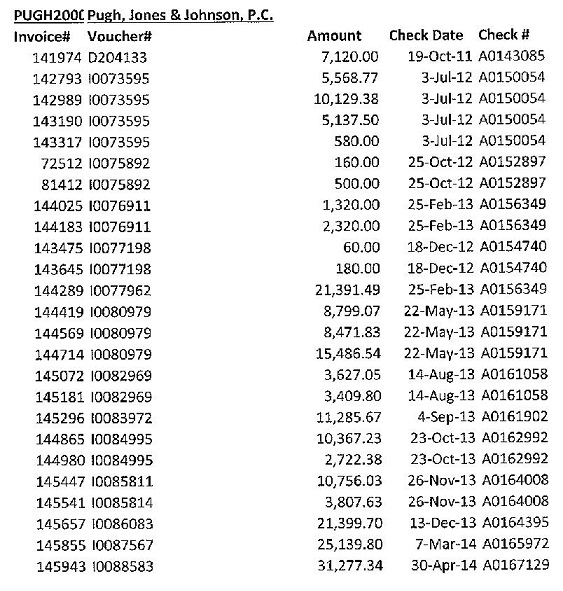 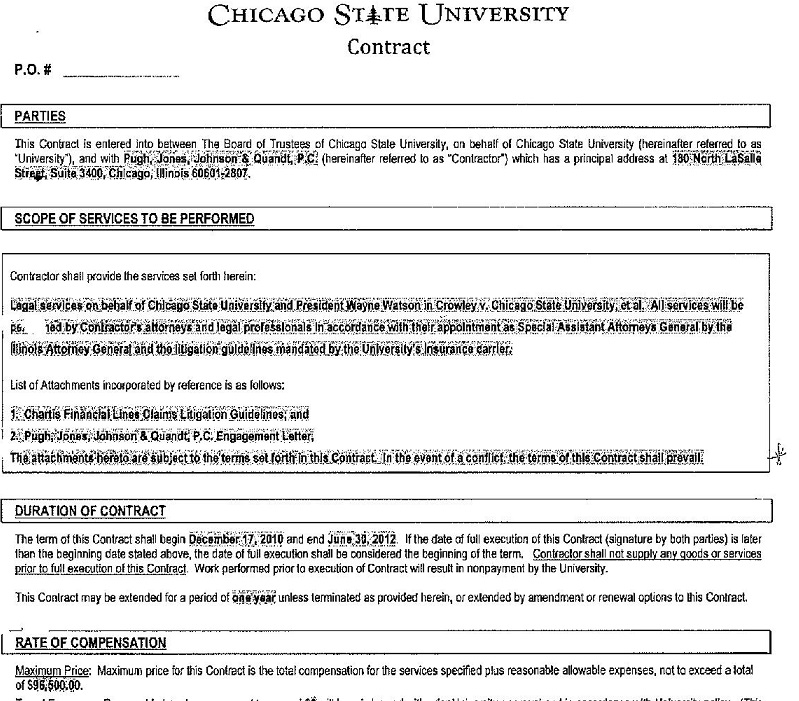 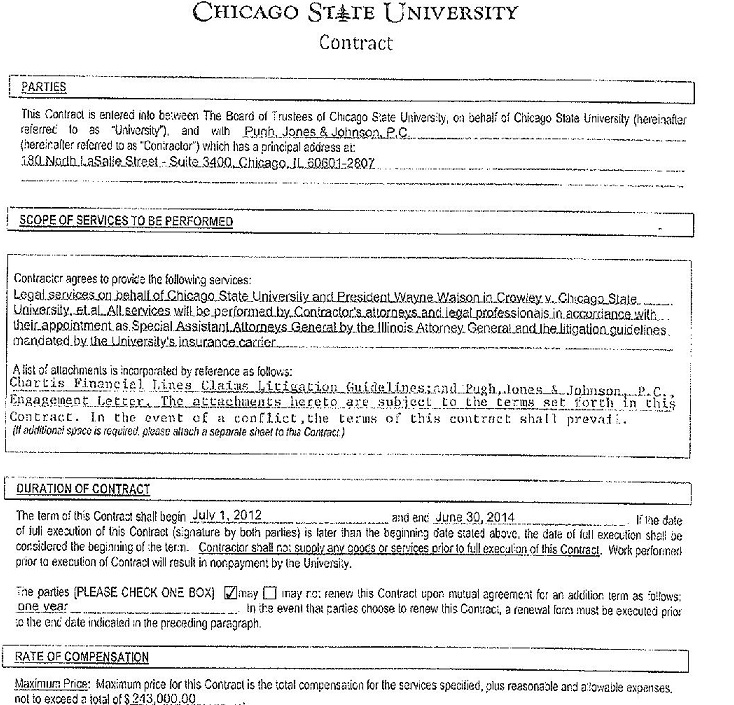 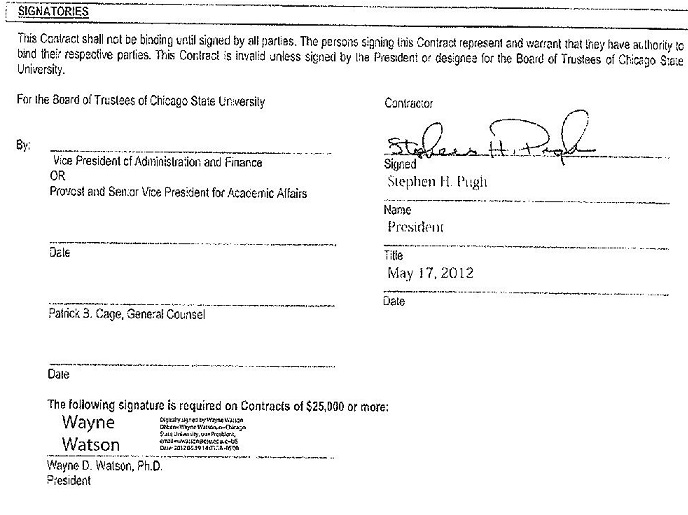 Posted by Robert Bionaz at 9:13 AM