Putting Lipstick on a Pig: Propaganda and Truth in Chicago State's "Factbook"

Over the past six years, we have seen the failed Watson administration use every device at its disposal to evade responsibility for the multiple administrative failures that have so damaged Chicago State. Watson and his minions have consistently advanced an exculpatory narrative long on jargon and vacuity and short on substance. We have been consistently told about the increases in “responsibility, accountability and transparency,” under the Watson regime. In reality, we have noted just the opposite. There is no responsibility or accountability for the failures or the dishonesty of Watson’s most loyal sycophants. The absence of “transparency” from our administration is the rule not the exception. We have also been told about Watson’s “raising academic standards.” Of course, the university provides no data to support that assertion, relying solely on empty assertions. I think it fair to say that the constant stream of sloganeering and empty rhetoric that emanates from the Cook building is designed to mask the almost complete absence of concrete policy and responsible management.

The Watson administration has now decided to describe the university’s disastrous enrollment decline as “right-sizing,” a basically meaningless term that is a particular Watson favorite. We first encountered “right-sizing” in 2010 when Watson and the gang laid off a number of low-salaried employees. This cant term lay dormant for several years until someone in the administration obviously thought it would serve a useful purpose as a partial explanation for the university’s enrollment problems. In the past several months, Watson mouthpieces forced to explain the ineffectiveness of efforts to stem the enrollment hemorrhage have parroted the “right-sizing” theme to our credulous Board of Trustees. Making the same empty promises about non-existent enrollment “stabilization,” Watson and his apparatchiks have fooled the board (or are its members complicit?) into delaying Chicago State’s inevitable day of reckoning—the day when we will have to begin cleaning up the mess these people have left behind.

As the scandals and administrative failures have mounted, Watson and his administrators have dedicated the university’s information dissemination organs to the distribution of pro-Watson propaganda. Look at how often the president or his administrators appear on the university web site. Look at the number of press releases that extoll the greatness of Wayne Watson or one of his other “operations team” members. Now, the dishonesty (not to mention semi-literacy) that stains our web site has spread to the university’s fact book, a yearly publication that provides objective data about the university’s effectiveness. The Watson camp has turned this publication into a propaganda vehicle.
Under the IER section of Chicago State’s web site a curious person can find 12 versions of the Chicago State Factbook, beginning in 2001 and continuing (with the exception of 2005 and 2008) through the present iteration for the 2014-15 academic year. All prior issues of the publication included one to three pages of boilerplate that described the fact book and published the university’s mission and values statements. However, a great deal of new information appears in this year’s fact book, most of it dedicated to Watson hagiography and to advancing the Watson narrative of “right-sizing.” It seems useful to examine the claims made in this narrative.

The new material includes a lenghty Watson biography as well as photos of his “operations team,” the persons who have brought us years of continual failures. A new section titled “Background” features a discussion of why Chicago State’s enrollment has declined as seen through the lens of “right-sizing.” To summarize, the administration is making sure that everyone knows the enrollment drop is not their fault. Here are the paragraphs: 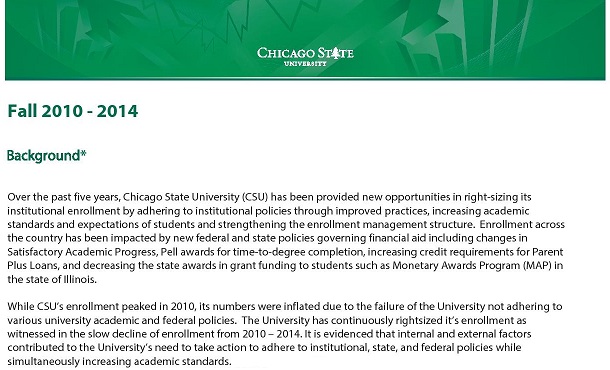 Examining the various assertions made in these two paragraphs reveals the utter falsity of this discussion. First, what “new opportunities” did “right-sizing” create? We do not know since there is no subsequent discussion of what those “opportunities” might be. Second, here’s the laundry list of empty verbiage about “increasing academic standards,” etc. Third, the familiar canard about enrollment drops across the country. Here’s the truth: Of the 257 schools I track yearly (the vast majority public non-research institutions), enrollment in fall 2014 is 99.9 percent of the 2010 levels. For Chicago State, enrollment is 70.8 percent of the 2010 level. Chicago State has the sixth largest percentage decline of those 257 schools. Thus, our situation in no way replicates the national trend.

The second paragraph is even worse. First, it is not even literate. Once again, the administrative hack (or hacks) who writes this material is unable to differentiate between the contraction of “it is” and the possessive (this egregious and stupid error appears again on the main university web page). Again, the reference to “right-sizing” and the disingenuous “slow decline of enrollment” for the past 4 years. Frankly, I would characterize a nearly 30 percent drop in students as a pretty rapid decline.

When one gets past the bullshit, there are some chilling numbers in the fact book that illuminate the scope of the enrollment problem here at Chicago State. Most important, between fall 2010 and fall 2014, the university lost 2151 students. During that same time period, Black student enrollment dropped by 2106 students. Our primary student cohort is simply deciding to go elsewhere. Given the performance of this administration, who can blame them?