Another Case of Retaliation at Chicago State: The Watson Administration Closes the HIV-AIDS Research Institute to Punish its Director for Standing Up to Them

What follows is my reconstruction of the events that resulted in the Watson administration’s elimination of Chicago State’s HIV-AIDS Research and Policy Institute and the removal of its Director, Tom Lyons. This vindictive and retaliatory action, apparently driven by Watson and Angela Henderson, exposes the university to the potential loss of a $2 million grant and demonstrates the administration’s appetite for vengeance, even at the cost of our students’ and the community's welfare. To regular readers of this blog, this is a familiar story.

As are all of Watson’s administrators, Lyons occupied a precarious position. Save for a small cadre of insiders who can apparently do nothing bad enough to incur Watson’s enmity, other CSU administrators are only one poorly chosen comment away from receiving their walking papers. The failure to express sufficient enthusiasm for the asinine and inept ideas of Watson and his insider cronies, or the high crime of “disloyalty” for even speaking in opposition to the great leader immediately exposes the perpetrator to increased scrutiny. Ultimately, if the miscreant is unable to rehabilitate her or himself, the Watson slime machine kicks into gear. Here is what happened to Tom Lyons.

Lyons began questioning the administration’s treatment of Willie Preston in February 2014. What he knew spurred him to learn more and in March 2014, he began to conclude that something was amiss in the official story of Willie Preston’s behavior. On March 21, 2014, he wrote this in an e-mail:

“I spoke with Marie Donovan, a faculty member at DePaul University who was present at the IBHE meeting last fall which was the grounds for Willie Preston's expulsion. She confirmed that he made no threats. In fact, she stated that at the time, she believed what he was saying, although she thought it was the wrong forum to raise the charges.

About a week after this meeting, Angela Henderson filed an order of protection against Willie at the Markham County Courthouse. He was expelled after this.”

In mid-April, the obvious injustice of the Preston case spurred Lyons to write one of the members of the Board of Trustees in an attempt to advocate for Willie Preston. On May 6, 2014, Lyons attended Preston’s hearing on the trespassing charges the university filed against Preston in March 2014. At the Cook County Circuit Court in Markham, he encountered Angela Henderson, her husband, the CSU Director of Judicial Affairs and two uniformed campus police. Lyons also saw the cozy relationship that existed between Preston’s attorney (who was trying to convince him to plead guilty) and at least one university administrator. He describes the scene this way:

“Although my understanding is that she was not required to be there, Mrs. Henderson attended with her husband Victor (Watson's personal attorney), along with Dierdre Cato the director of judicial affairs and two uniformed campus police. I assume that Mrs. Henderson planned to testify and weep emotionally in front of the judge as Willie tells me she did at his expulsion hearing.

Willie's attorney, Bernard Sheldon, showed up almost two hours late. Deirdre Cato actually called him on his cell phone in the hallway after the hearing and he went over to talk to her. He was overheard telling her ‘there was nothing he could do’ (to prevent the continuance?). The judge issued the continuance only because Henderson's side filed some paperwork late.

So Willie was nearly tried and sentenced in a courtroom where he was represented by a lawyer who was apparently in cahoots with Watson and Henderson.”

Although she did not speak to Lyons at the hearing, Henderson seemed quite displeased to see him. According to Lyons, she had “daggers” in her eyes. Lyons then compounded his treason against the Watson crony by reading a letter from Willie Preston to the Board of Trustees on May 9, 2014 (following the choking and arrest of Jokari Miller at the same meeting). Here are some excerpts from Preston’s letter:

“I was suspended and ultimately expelled from CSU because I openly ran on a platform to utilize the office of the student trustee to express what I grew to understand to be the will of the student body, which is the removal of President Wayne Watson as President of CSU. To be clear, my removal from the university was purely politically motivated. In addition, since that time, I’ve been further attacked by university officials for continuing my endeavor to articulate the reasons why CSU needs new leadership. Specifically, I’ve been falsely accused of a number of ugly things by Interim Provost Angela Henderson.”

After his May activities, Lyons realized that Angela Henderson had started asking questions of his Dean about the HIV-AIDS Center’s function and apparently began suggesting that “institutes” on campus should be abolished. Despite Henderson’s ham-handed threats, Lyons continued his effort to see justice done for Willie Preston, which undoubtedly estranged him even further from the Watson regime.

On December 19, 2014, Willie Preston won a complete victory over Angela Henderson and Chicago State when a Circuit Court Judge vacated the specious order of protection illegally granted to Angela Henderson. Ultimately, on February 5, 2015, another Circuit Court Judge dismissed the ridiculous criminal trespassing charge against Preston (which had been based on the bogus order of protection). Note to Watson’s stooges: this is what “exoneration” looks like, in contrast to having some well-connected “fixer” take care of a troublesome problem.

Frustrated with its inability to railroad Willie Preston into jail, the administration had to find someone to punish. Given his consistent support of Preston, Tom Lyons seemed a likely candidate. On January 23, 2015, our execrable administration notified Lyons that his research institute would be closed and that he would be returned to faculty status. As an added slap in the face, the administration told him he would receive the minimum salary possible for the rank of Associate Professor.

In response to the administration’s obvious retaliation, Lyons wrote the following letter: 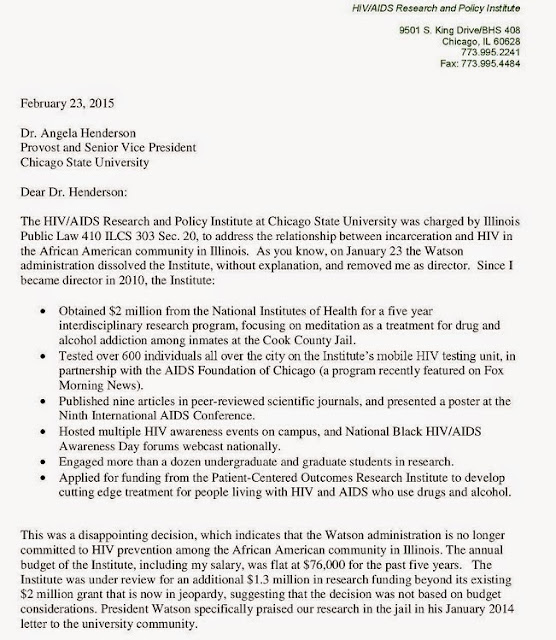 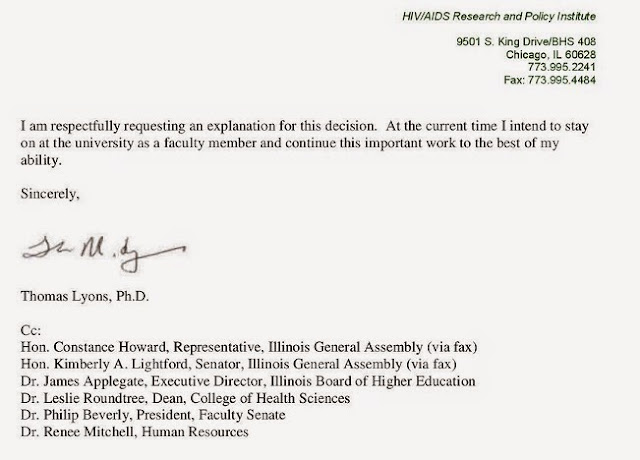 I think the letter speaks for itself and underscores the ethical bankruptcy of the Watson administration.