Okay Folks, We're Definitely Taking on Water: Are There Any Lifeboats? Is There Another Ship to Come to Our Rescue?

Back in December, I asked if Chicago State’s enrollment would drop below 5,000 for Spring 2015. Unfortunately, the answer is a resounding yes:

The dismal statistics continue: a drop of 2544 students since Fall 2010 (34.6 percent)and nine consecutive semesters of enrollment losses. What does the Watson administration plan to do about this continuing disaster? Based on their history, they will continue to spin and dissimulate, and continue to set ridiculous and unachievable goals. If this group of administrators remains in place, Chicago State is doomed. Here’s what the H.M.S. Chicago State will look like in a few months: 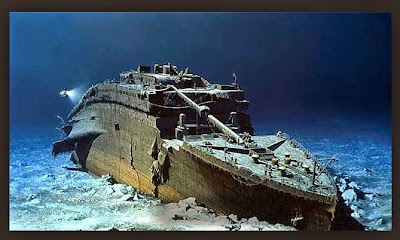 Now, Wayne Watson is telling the Board that we’re “right-sizing” the university. However, this latest insult to our intelligence from our erstwhile president has apparently been articulated only since May 2014, when our enrollment plunged below 5300. Of course, that was nearly 500 disappearing students ago. Just five months earlier, Watson sang an entirely different tune as he told the Board that increasing enrollment was his administration’s “top priority.” Compare that comment, made on December 13, 2013, with the May 9, 2014, revelation:

The truest indication of how the administration views the enrollment decline appears in its pathetic efforts to create “goals” that are completely asinine and unrealistic. At the same meeting Watson talked about “right-sizing” one of his administrators told the Board about Enrollment Management’s goal of a 3 percent increase in enrollment for Fall 2014. This goal, a percentage increase no university or college system has ever experienced under Watson’s leadership, sought to raise Chicago State’s enrollment from its anemic Fall 2013 total of 5701 to 5882. How did the administration do? They missed slightly, since the actual Fall 2014 enrollment of 5211 fell 671 students (11.4 percent) short of Enrollment Management’s magic number.

Undaunted by what should have been an embarrassment, the Watson administration engaged in even more fantastic thinking about the possibilities of a dramatic enrollment increase for Spring 2015. Ignoring the easily discovered history of enrollment declines from Fall to Spring, the deep thinkers in the Watson administration decided that 5597 (a 7.4 percent increase) students represented a reasonable goal for Spring 2015. Of course, our intrepid and highly-compensated folks in Enrollment Management fell a little short again. The final total of 4818 is 779 fewer (16.2 percent) students than they desired to enroll. So what kind of nonsensical “metrics” will be treated to as we look toward another enrollment debacle in Fall 2015? How about an enrollment of 7,000. Oh, I forgot that we cannot have that many students since that would make us a “very different” school than the incredible shrinking institution Watson envisions. Really, you bunch of incompetents, just stop this bullshit. This problem is far beyond your limited abilities.

Although I take no satisfaction in being somewhat more accurate than the folks who are paid large sums of money to “manage” our enrollment (back in December, I said 4850 for the Spring), I will go out on a limb and predict that our Fall 2015 enrollment will likely drop to around 4700. I fervently hope I am wrong. What do you think it will be?