The Watson administration works hard to conceal its multiple failures from a variety of potentially pesky outside agencies. As Phil Beverly’s most recent posts discussed, the university has made troubling and unverified assertions about its federal financial aid compliance, resulting in a rather stinging rebuke from the U.S. Department of Education and provisional status for financial aid distribution until December 31, 2015. As the current financial aid fiasco demonstrates, the university administration often attempts to show competence where none exists and to cover up any evidence of its failure to comply with established regulations. Even more problematic are the university’s repeated attempts to present itself in public documents in ways that do not conform to the reality of its operations. Of course, Watson and his acolytes have found it easier to hoodwink the rubes on Chicago State’s board and in Springfield than the watchdogs in the federal government who seem less than impressed with the great man’s “vision” for the university.

Chicago State is required to report a variety of data to outside state entities. The school reports to the Illinois Board of Higher Education things like employee salaries, student data on enrollments, degrees granted, etc. All this information is available to the public through the IBHE website. The university also reports yearly to the Illinois State Legislature (ISL Forms). This report contains a wealth of information on university operations. It includes some of the same information the university provides to IBHE as well as information that offers a look at (but not limited to) yearly audits, contracts, more detailed employee data, and travel and equipment expenditures. I assume that most of the information reported to the state is also provided to the Chicago State Board. Chicago State also produces a closely guarded yearly budget report. The sum of this information becomes part of the “public face” of Chicago State University and is accessible to anyone with the desire to research the school’s operations.

Unfortunately, some of the information contained in these various reports does not bear close scrutiny, as the figures reported to outside agencies do not conform to the internal figures supplied through FOIA responses by the university. For this post, I will focus most of my discussion on financial issues, in particular, the integrity of the university’s reporting of salary data and its use of “overrides” to provide additional compensation for several administrators—compensation that appears in basically none of the reports the university files with outside agencies.

First, let us look at how the university presents itself to outside observers. In the management response to the most recent audit, the administration described “the University’s financial position” as “strong.” Continuing its rosy narrative, the response to the auditors declaimed that “the management of the University believes it is well positioned to continue its strong financial condition and level of service to its constituents.” The management response also took pains to trumpet the greatness of Wayne Watson’s leadership in securing accreditation for Chicago State, informing the auditors that “Dr. Wayne Watson . . . proudly announced the reaccreditation of the University in June 2013. The University is grateful and proud to note this resounding success. . .” (2015 ISL Forms NQ 25, Exhibit Q3A, 7, 17-18)

Based on the information supplied to the auditors by Chicago State’s administrators, one might conclude that the university has money for lots of things. However, a look at the Watson administration’s spending priorities paints a somewhat different picture. There is money for administrative salaries but not for faculty sabbaticals. Recently, one of my colleagues successfully grieved a sabbatical request denied by Watson due to “the fiscal constraints of the institution . . .” Wait, what happened to the university’s “strong” financial position? Based on my rough calculations, this colleague’s sabbatical will cost the university around $32,500. Has Chicago State’s financial position deteriorated so much since the school’s most audit response?

The ISL Forms report that from Fall 2011 through Spring 2014, Watson granted 7 sabbaticals (3 in 2012, 2013 and 1 in 2014 to 5 unit A faculty, 1 full-time lecturer and 1 administrator) at a cost of $208,715. Since under the CSU-UPI contract the yearly “quota” of sabbaticals is one for every 17 employees, it seems obvious that Wayne Watson has again arrogated to himself the ability to ignore contractual requirements. One might conclude that the fiscal crisis at Chicago State must be extreme to justify the virtual elimination of sabbaticals from the university.

Before doing a more detailed analysis of these overrides, several general points seem important. First, the administrators themselves are, in most cases, doing jobs as “interims”, a status Wayne Watson utilizes extensively. Second, there is no evidence to suggest that any of these administrators are engaged in the decision-making process that results in their receipt of administrative overrides. Third, although these overrides are theoretically reported to IBHE, the amounts appearing on that website are different than the total amount discovered through FOIA. In most cases, the overrides do not appear at all. For example, the university paid a total of $135,946.50 in overrides for these administrators from 2012-2014 and apparently reported a total of $19,119.66 (all in fiscal 2013) during the same period. As a result, Chicago State spent an additional $116,826.84 in three years on these administrators, an amount that appears nowhere in any easily accessible public record.

Here are the amounts spent by the administration on overrides for these five administrators:

Tyra Austin, Assistant Director of Financial Aid: Austin, hired with a falsified resume and without even the minimum qualifications for her position in 2012 apparently made a base salary of $55,000 in fiscal 2013 and 2014. This is difficult to ascertain since she is not even listed in the 2014 Internal Operating Budget. However, the administration paid Austin $3315.04 in overrides over 16 pay periods in fiscal 2013 (it reported $2900.66 to IBHE), and an additional $7,725 in 3 pay periods fiscal 2014. This last amount seems like a going away present to Austin since she apparently resigned at the end of June 2014 and the administration paid her the overrides in April and May of that year. Total overrides paid to Tyra Austin: $11,040.04. Total reported to IBHE: $2900.66 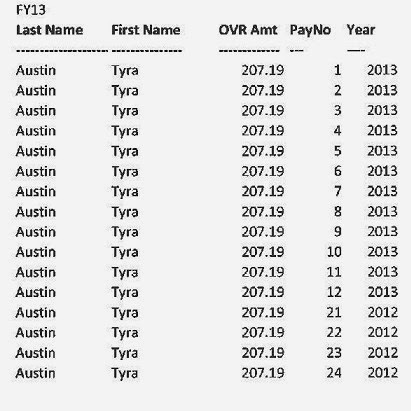 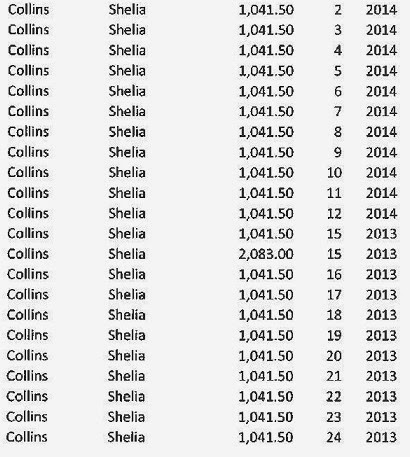 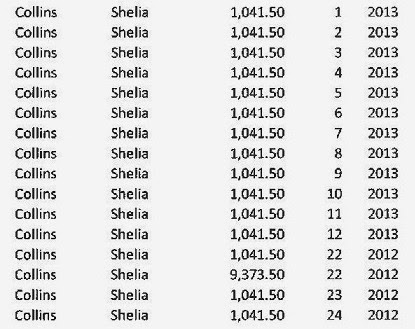 Angela Henderson, Interim (?) Provost: Henderson, hired with falsified statements on her application/resume and having demonstrably plagiarized her dissertation, has not only continued to be employed, she was promoted by Watson to the Provost’s position on July 1, 2013. Listed in the 2014 Internal Operating budget as the Vice President of Enrollment Management at a salary of $154,500, the university has paid Henderson $20,508 in overrides for the last full fiscal year. Total overrides paid to Angela Henderson: $20,508. Total reported to IBHE: $0. 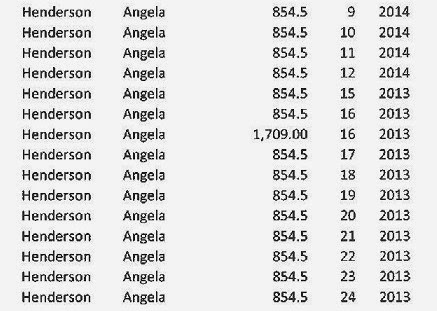 Farah Muscadin, Interim Dean of Students: Listed in the 2014 Internal Operating Budget as Director of Intergovernmental Affairs at a salary of $102,000, Watson recently gave Muscadin the additional position of Interim Dean of Students. Between April and the end of fiscal 2014, the university paid Muscadin a total of $3499.98 in six pay periods. Total overrides paid to Farah Muscadin: $3499.98. Total reported to IBHE: $0. 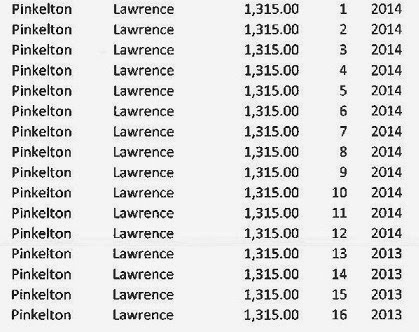 For faculty, the university “caps” override CUES at 6 ($4800), or 25 percent of the total maximum CUE load of 24 per year. As for earnings, faculty are not supposed to earn more than 20 percent above their yearly compensation. After all, we wouldn’t want the faculty getting rich at the taxpayers’ expense. Of course, those “caps” do not apply to administrators. The aggregate additional override compensation the university paid to the five above administrators averaged 17.3 percent. The overrides paid to Collins averaged 37.6 percent, to Pinkelton 26.6 percent. Obviously, the university sees no reason to cap the potential earnings of its administrators.

So, if you are someone interested in the goings-on at Chicago State, or if you’re a board member or state official, there is almost no way to determine from information supplied by the university what a number of administrative persons actually earn. This must be an example of Watson’s vaunted “transparency” and the seriousness with which he treats his stewardship of public funds. Frankly, the public and private faces of Chicago State do not mesh. For additional examples of this administration’s cynical treatment of the university community and the public-at large, one need look no further than the university’s website. As I have noted previously, mistakes abound, many continue uncorrected for years. If the visitor to the site can get past the various encomiums to the greatness of Wayne Watson, s/he will find that the last posting of Provost Council meeting minutes is from September 18, 2013, the last posting of an academic policy change is from Fall 2011. Indeed, the entire Provost section of the university webpage is “under construction,” a status extant since last July.

Clearly, Chicago State University has money for some things, support for faculty research and website maintenance not among them. However, it is vital that the school's administration keep its financial operations as opaque as possible.