Is This Extortion? Musings About Libel and Lawsuits

Although I appear as the chief protagonist in the theatrical libel/slander lawsuit filed recently by Angela Henderson, my exclusion from the list of defendants offers me an opportunity to comment on the on-going litigation. I have to say that I am still shaking my head at that particular complaint. In this post, I will offer some analysis and interpretations that have resulted from my perusal of that fascinating document.

Since material for complaints comes primarily from the complainant (lawyers function mainly as stenographers during that process), Henderson’s suit provides a clear view of the administration’s position on a number of issues. Frankly, you can almost see Wayne Watson’s behind Angela Henderson’s complaint.

Early on, the complaint makes sure to announce that at Chicago State there exists “a small group of disgruntled faculty . . . that has attempted to put a stop to the positive educational changes being made at the university.” Who says there are positive educational changes occurring at Chicago State? Why our friends at the HLC. Unfortunately, one of those “disgruntled” faculty members, namely me, does not share the HLC’s enthusiasm for Watson’s leadership genius, as continuously articulated by the heroic great man himself and validated by the HLC. Unfortunately this portion of the complaint does not describe the “positive educational changes” to which the document alludes.

In fact, through the complaint, I found out that I was the leader of the “disgruntled” faculty members. In my capacity as leader, I proceeded to download Henderson’s dissertation (a public document on a public website), “in order to undermine her reputation and credibility by falsely claiming that she engaged in plagiarism.” This behavior, of course, simply hews to my already established leadership pattern of “undermin[ing] the university and attack[ing] certain administrators, including Ms. Henderson.” All of this material appears on a single page of the complaint (page 2), offering a parade of accusations supported by nothing more than assertions from someone who has already demonstrated considerable difficulties with the truth.

The next page offers more of the same. Here the complaint runs into some difficulties because it expresses Henderson’s belief that I simply used a “software program” with all its inherent flaws, to detect Henderson’s plagiarism. As the complaint points out, “the software program cannot be relied on alone to detect plagiarism.” What a surprise is in store for Angela and her lawyers on that count!

Finally after rambling through the various examples of persecution visited upon Henderson by me, the complaint gets to the point. It has three parts: 1) Since the “generally accepted definition of plagiarism is intentionally (italics in original) taking the work of another and attempting to pass that work off as your own”; 2) “By definition, honest and unintentional mistakes are not plagiarism”; and 3) “Ms. Henderson has denied any allegations that she plagiarized her dissertation, in whole or in part.” Are these assertions not an admission that Henderson’s dissertation contains “honest and unintentional mistakes” and that while she really did not “intentionally” try to pass the work of other scholars as her own, she still did so? Do these assertions not weaken the argument that the plagiarism accusations were “false” and designed to “undermine” her “reputation and credibility at CSU”? (page 3)

How about the argument that the "generally accepted definition of plagiarism" requires that the plagiarizer "intentionally" commit the offense? Here is a sample of definitions, from universities, the American Psychological Association, the Modern Language Association and dictionaries, including Black's online law dictionary. You will note that none of these definitions require intentionality. Neither does UIC's Academic Integrity Policy. It looks like the definition of plagiarism is not exactly what Henderson wishes it were: 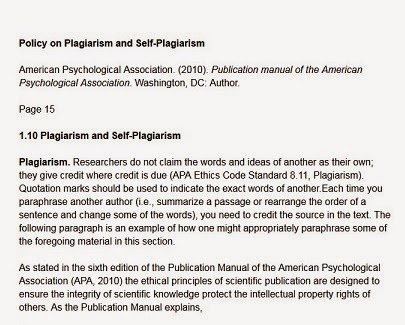 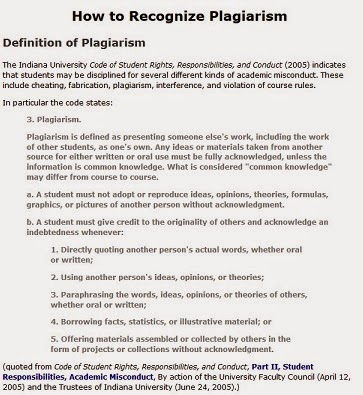 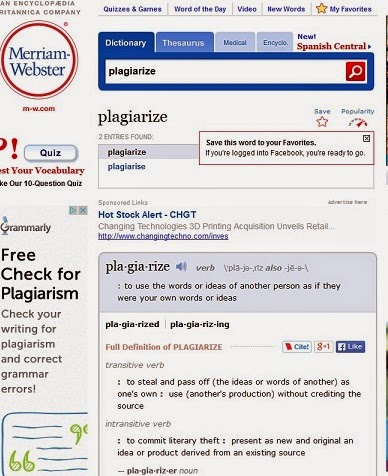 On page 4, the complaint finally gets to the two defendants, UIC Provost Lon Kaufman and Graduate College Dean Karen Colley. For the next seven pages, the document throws out a number of accusations, none of which include any specific libelous comments. Apparently, the only comment made publicly by either of the two defendants was Colley’s quote in the January 14, 2014 Tribune story, a boilerplate comment to the effect of UIC taking plagiarism allegations seriously. The final seven murky pages features a series of accusations that attempt to connect the defendants with violations and improper disclosure of Henderson’s privacy and FERPA rights because they had responded to a newspaper reporter’s questions. Henderson’s complaint accuses Kaufman of a “long standing personal and professional relationship” with Jodi Cohen, the reporter who wrote the January 14 story. Henderson offers no evidence of this relationship.

Another assertion supported by no evidence appears on page 7 when Henderson claims that at least "five other dissertations from the nursing program that had been checked against software programs which received higher or worse scores on the plagiarism index than hers did." And, "at least another 30 UIC dissertations, in addition to the [previous] five . . . also showed high or problematic software scores." Does this passage not confirm that Henderson's dissertation was "high" or "problematic" in terms of its plagiarism? The remainder of the complaint is a convoluted mélange of assertions and allegations, none of which contain any reference to comments made by the defendants, orally or in writing to any third parties. Here (http://www.dmlp.org/legal-guide/illinois-defamation-law) is the legal definition of defamation (and libel, slander): 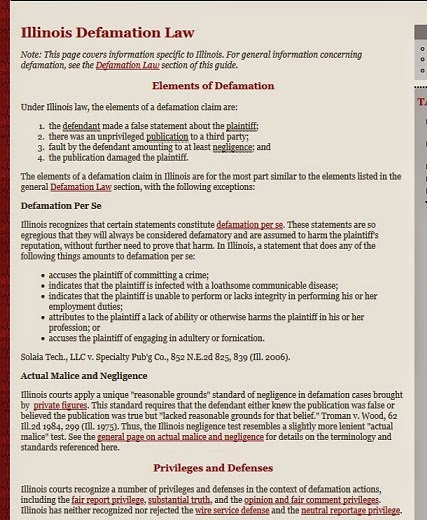 Of course, the truth is always a defense against defamation/libel/slander: 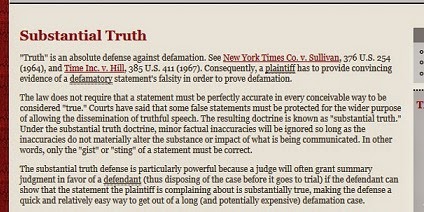 In its concluding paragraphs, the Henderson complaint apparently claims that the publicly published dissertation is somehow part of Henderson’s privacy rights as a “private academic matter”, which UIC is “required . . .to keep . . . private.” The complaint asserts that “the matters disclosed . . . related to Ms. Henderson’s private, not public life,” and that “the allegations were not of legitimate public concern.” Henderson’s complaint reiterates her claim that “the aforementioned allegations of plagiarism against Ms. Henderson are false.” (pages 9-10).

Given the complete absence of defamatory comments from the two defendants, one might wonder what this lawsuit is designed to achieve. There are a number of questions that need to be answered: 1) did Henderson plagiarize? 2) Since the answer to that question is yes, what should the penalty be for her plagiarism? 3) Did UIC violate FERPA in disclosing “private academic matters”? 4) Did UIC officials libel or slander Henderson? Based on the material in the complaint, I have come to several conclusions about that. Readers are certainly free to draw their own conclusions.

1) It seems likely that the academic administration at UIC intends to rescind Henderson’s degree, an action I consider completely appropriate. In her complaint, Henderson references the 14-member Graduate College Executive Committee’s recommendation that she “revise” her dissertation. If the UIC administration had accepted that recommendation, this issue would be resolved. The decision to impose more severe discipline is clearly within the purview of UIC’s administration.
2) If that is the case, the lawsuit becomes more understandable. It is a pre-emptive strike against the University of Illinois at Chicago, an attempt to extort them to desist in their efforts to rescind a degree Henderson clearly did not earn.
3) Since Henderson did, in fact, plagiarize her dissertation (according to the UIC College of Nursing’s Academic Integrity Policy), statements asserting that she plagiarized are, in fact, true.
4) Since statements about Henderson’s dissertation plagiarism are true, they cannot be libelous or slanderous.
5) Whether UIC violated FERPA or whether UIC officials committed libel/slander have nothing to do with the reality of Henderson’s plagiarism.
6) If Henderson wishes to pursue an action for FERPA violations, the appropriate venue is Federal Court.
7) By filing this action, Angela Henderson has put herself into a unique position. Instead of being able to run roughshod over a powerless student with few financial resources or political connections, she is now pitted against the largest university system in the state, one with significant resources and political influence. It seems a high-stakes gamble and we will see how it works out for her, and more important, how it works out for UIC and CSU.

It will be interesting to see how long this drags on.