It's a New School Year and the Stench from the Cook Building Still Permeates the Air: How the Administration Ignores or Reinterprets the Law. How to Throw Away $100,000. How to Foster Insecurity.

Ostensibly, the Freedom of Information Act (FOIA) commits public institutions to transparency, in the belief that public scrutiny is an important safeguard against institutional corruption. In Illinois, however, the laws governing the “free flow of information” and that purportedly ensured “transparency” were “neither adequately enforced nor broad enough to create a government that is sufficiently transparent, open and responsive to its citizens’ requests for information.” Thus, “public officials can conduct business without the public’s scrutiny,” which facilitated “a culture of corruption.” A 2009 report by the Illinois Reform Commission found FOIA compliance particularly problematic. In a 2006 report, the Better Government Association found that only thirty-eight percent of 408 government offices responded to legitimate FOIA requests. An additional thirty-nine percent provided no response. The association also found disturbing the significant “level of resistance, obfuscation, and outright hostility that greeted the ordinary citizen asking to see public records.” In Illinois, the lack of adequate laws created an “atmosphere in which corruption thrives, cynicism increases and accountability diminishes.” Given the information contained in the Reform Commission report, one might conclude that public officials in Illinois were not particularly interested in combating the state’s endemic corruption.

Chicago State University’s FOIA component could have served as a model for the commission’s report. Although FOIA requests have resulted in a considerable amount of information coming from university sources, Chicago State’s customary responses certainly reflect “resistance, obfuscation,” and even “outright hostility.” A brief comparison with the FOIA practices at the University of Illinois is instructive. At Illinois, the university maintains a publicly accessible FOIA log that includes (for all three campuses) the date, the name of the requestor, a description of the original request and the university’s response to the FOIA request. According to the Illinois Board of Trustees, in calendar 2013, Illinois received 621 FOIA requests. Requestors subsequently submitted 12, or 2 percent, (13 according to the U of Illinois FOIA office) to the Public Access Counselor for Review.

I maintain an unofficial FOIA log for my own requests since there is certainly nothing like the Illinois FOIA log available on the Chicago State website. Since August of 2013, I have submitted at least 18 FOIA requests. Chicago State has responded within the statutory time limit on five occasions. The other 13 requests necessitated appeals to the Public Access Counselor for review. The reason for the requests for review in 12 cases was the university’s complete failure to respond within the prescribed time limit, which constitutes a denial. Of the last 10 FOIA requests I have submitted (since December 2013), the university failed to respond all 10 times. While the University of Illinois system complies with the FOIA law 98 percent of the time, here at Chicago State, I have had to appeal to the Public Access Counselor in 72.2 percent of my FOIA requests. I think it possible that the Chicago State administration does not want to give me the requested public information.

Despite the administration's obstructionism, FOIA requests submitted by Chicago State faculty have nonetheless revealed a disturbing pattern of administrative incompetence and fiscal mismanagement. Recently, the university spent $100,000 to hire a search firm to conduct a search for a new Provost. The end result? Seemingly nothing since it appears that Angela Henderson still functions as the university’s Interim Provost. How and why did the university spend that kind of money? The answer to how is rooted in current Illinois law, a resolution passed by the Chicago State Board of Trustees and a Human Resources policy that, I believe, goes far beyond the intent of the law.

On January 1, 2013, a new law went into effect that prohibited the use of external search firms in hiring except for “in the hiring of the President of the University or (ii) in the case of when the President of the University and the Board demonstrate a justifiable need for guidance from an individual or firm with specific expertise in the field of the hiring. The University shall implement a policy under this Section, including qualifying criteria,within 6 months after the effective date of this amendatory Act of the 97th General Assembly.” In response to this restriction, Chicago State’s administration requested carte blanche to use search firms for other administrative hiring, based on “qualifying criteria” far in excess of what appears to be the law’s intent. On March 8, 2013, the Chicago State Board acquiesced to the university’s “desire” to create “the option of using search firms in the following additional categories of possible searches: vice presidents; deans and health science faculty with terminal degrees.” 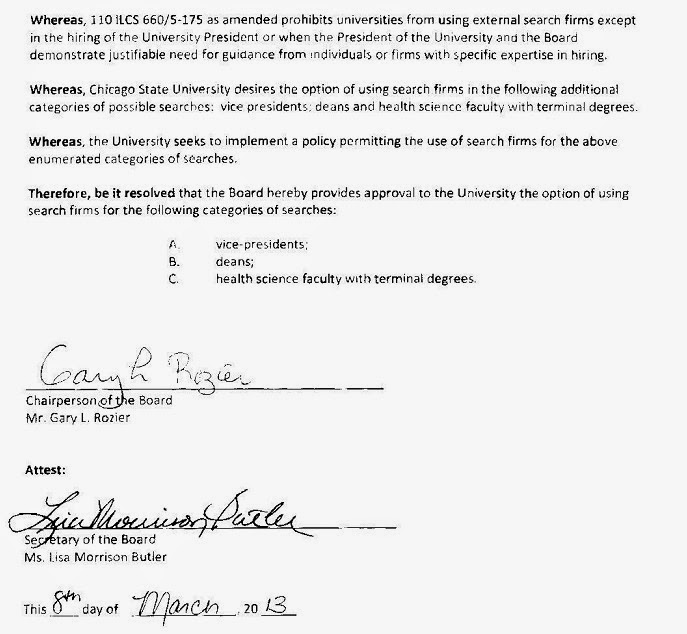 The policy that the university finally adopted is even more expansive, with so many “qualifying criteria” that a search firm could be used for almost any hiring (HR Policy Manual, p. 37). That is how this law: 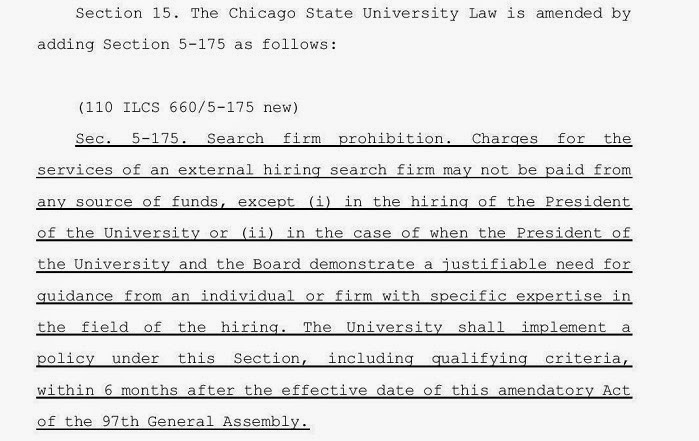 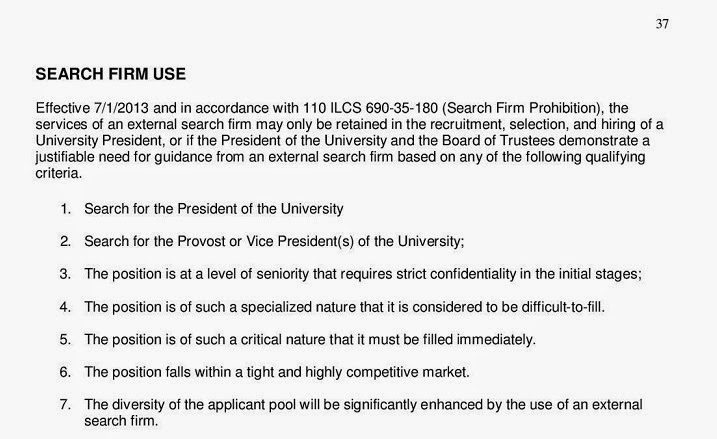 So, armed with dispensation from the Board and itself to hire a search firm for a new provost, the university did so. Why? The answer to that question is complicated, although I think not particularly opaque. First, Chicago State hired its old reliable search firm, the Hollins Group, the folks who brought us Wayne Watson in 2009. They paid them $100,000 to conduct a search that was already rigged. This meant that the “search committee” created for the provost search would have little or no input into the winnowing of the applicant files. Most of us have had the experience of spending time and effort on a search or other type of committee with a nil net result since the administration (read Wayne Watson) chose to do nothing about whatever recommendation the committee submitted. Clearly, the insider choice of Wayne Watson was his old sidekick, Angela Henderson. It is difficult to imagine how the Hollins Group would produce a list of finalists that would not include Henderson. In any real competitive search for someone to be the chief academic officer of a doctoral degree granting university, someone with Henderson’s non-existent scholarly credentials would not even meet the basic requirements of the job (of course, even here at Chicago State, she was possibly qualified to apply for an entry-level Assistant Professor’s position). Since the applicant group for Chicago State’s provost position did not include any finalists with a similarly meager C.V. (Wayne Watson did not apply), the four finalists included three persons who actually had some qualifications, along with Henderson. Could not this have been done more cheaply than the $100,000 price tag for the Hollins Group? The obvious answer is yes. However, the use of the Hollins Group made the potentially pesky faculty and staff irrelevant. Since the Hollins Group anointed the four finalists, the probability of the “right” candidate emerging out of the applicant pool could potentially be guaranteed. So, either way the search concluded—with a new permanent provost or with the current interim provost in place—the use of the Hollins Group was bound to be a waste of $100,000 of the taxpayer’s money, save to insure that the “right” candidate came out of the herd. Take a particular look at the second document. 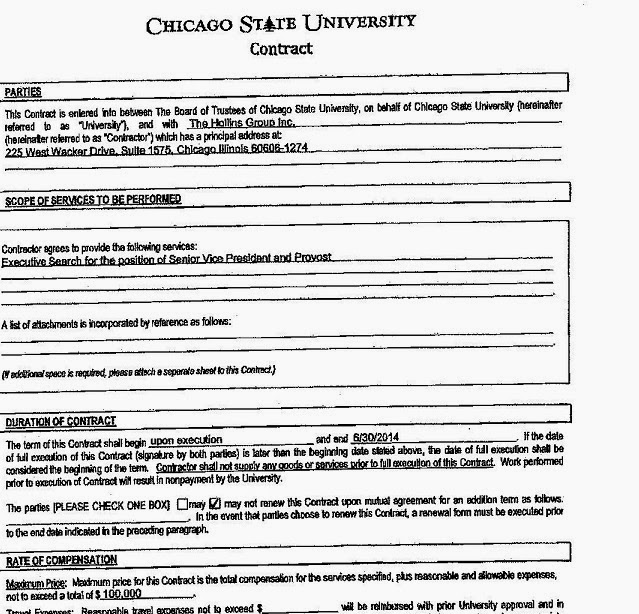 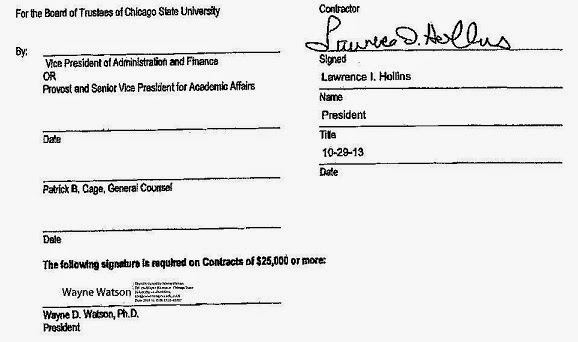 Of course, at Chicago State, it is hardly standard procedure to have expeditious searches for administrative positions. An examination of the last two organizational charts published by the university demonstrates that reality while it also shows how this administration uses “interim” administrative appointments. On July 31, 2012, of 20 key administrative positions at Chicago State—Deans of six colleges, Dean of the First Year Experience and Dean of Students; Four Vice Presidents (Administration and Finance, Provost, Enrollment Management and Sponsored Programs); Six Directors (Intergovernmental Affairs, Budget and Resources, Counseling Center, Financial Aid, Institutional Research and Meetings and Events); the Registrar and the Internal Auditor—4 were staffed by “interim” administrators and 3 were vacant. Looking at these same 20 positions now, it appears that 12 are filled by interims and 2 are vacant. In a little more than two years, the number of interim appointments has tripled and the total number of interim/vacant positions has doubled. 16 of the 20 administrative positions are filled by persons who were not in those positions in 2012. Currently, Chicago State has extant job announcements for only 4 of the 14 interim/vacant positions. How does all this administrative upheaval serve the university? Not very well.

None of this is necessarily a reflection on the ability, performance or commitment of the occupants of those interim positions, rather the proliferation of interims speaks to an administrative culture which, at the top, values uproar and uncertainty over consistency. The precarious nature of administrative employment (except for a select few) seems far from optimum and creates the potential for university operations to suffer. As an example, the Dean of the College of Arts and Sciences is new. The previous Dean of the university’s largest college had been an interim appointee since at least 2011. There have been at least three fruitless searches for a permanent Dean. Why? Only Wayne Watson knows the answer to that question. Currently, the Financial Aid Director’s position seems to be vacant. Given the problems in that area, should filling that position be a priority? Apparently not, there is no current job announcement on the CSU website. Finally, I have heard from various administrators about the paperwork bottleneck in the provost’s office; apparently important paperwork frequently goes in and comes out long past the time it needs to be processed, if it comes out at all. Sort of like this: 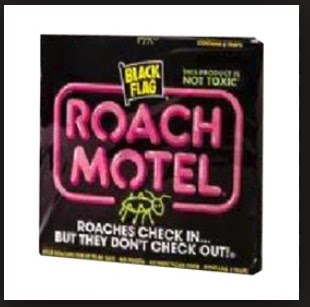