Why Should Wayne Watson Get Another Day? Are We Better Off Now Than We Were Five Years Ago?

Since today, June 30, 2014, marks the expiration date of Wayne Watson’s original contract as Chicago State’s president, it seems logical that we revisit President Watson’s contract and assess his performance. All the material referenced below is available in the public record, in fact, all of this evidence comes from the Chicago State website or the university’s published Internal Operating Budget. The assessment of President Watson’s performance will be based on the evaluation criteria established by the board in 2009: 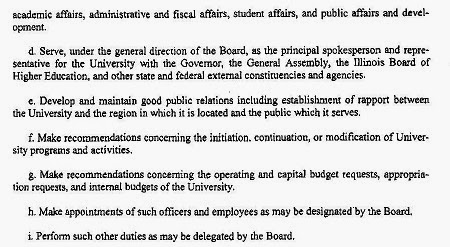 Section 2.03 defines 9 general duties the president is charged with performing (2.03a through 2.03i). They include “general leadership for the university,” along with several general statements defining his role as the university president. Section 2.04.b. specifies the seven criteria by which the board will evaluate the president’s performance. These sections will provide the backdrop for this assessment.

The relevant statistical data on Chicago State’s enrollment and fiscal performance in the past five years follows:

1) Enrollment: 6820 in 2008-09 (the last year before President Watson took over Chicago State), 5701 in 2013, a decline of 16.4 percent
2) Enrollment of first-time, full-time Freshmen: 402 in 2008, 225 in 2013, a decrease of 44 percent.
3) Graduation rate for first-time, full-time Freshmen: 13.8 percent in 2008-09, 20.7 percent in 2012-13, an improvement of 50 percent.
4) Retention rate for first-time, full-time Freshmen: 57.7 percent in 2008-09, 54.8 percent in 2012-13, a decline of 5 percent
5) Audit Findings: Since 2010-11, Chicago State has had 120 audit findings, the most of any Illinois state institution. This number exceeds Illinois-Urbana-Champaign’s 111 total during the same period. Although the number of 2014 findings dropped sharply from the previous year, Chicago State, with 3 percent of the state’s university students, generated almost 19 percent of its audit findings. Illinois at Urbana-Champaign enrolls about 8 times the number of students as Chicago State. Between 2003-09, Chicago State generated 74 audit findings. During the Watson presidency, audit findings have increased 38 percent.
6) Fundraising: Contributions to the CSU Foundation under President Watson have averaged $1.15 million since Fiscal 2010. Contributions from Fiscal 2003-08 (Fiscal 2009 is not included as the university president was an interim) averaged $2.13 million. During President Watson’s tenure, contributions have declined 46 percent.

Looking back over the past five years, President Watson’s performance looks like this:

1) Section 2.03: Wayne Watson has, in general, done what the board expected him to do in section 2.03. He has not been derelict in the performance of his general duties, although on a qualitative level, section 2.03.a. and 2.03.e. are not complete successes
2) As he points out often, President Watson presided over the university’s successful accreditation effort.
3) Section 2.04: Under President Watson, Chicago State has succeeded in raising the graduation rate for first-time, full-time Freshmen (2.04.b.(2)). In addition, the Pharmacy program has grown under his presidency, which may be considered a success under the somewhat opaque section 2.04.b.(4).
4) In some cases, on a departmental or individual level, President Watson has made a positive difference for particular faculty, students or staff.

Failures:
1) Overall Enrollment: down 16.4 percent since 2008-09.
2) First-time, full-time Freshmen enrollment: down 44 percent since 2008-09.
3) First-time, full-time Freshmen retention rate: down 5 percent since 2008-09.
4) Contributions: down 46 percent since Fiscal 2008.
5) Audit Findings: up 38 percent since 2003-09.
6) Graduation rate for first-time, full-time Freshmen has declined slightly for the past three years, from 21 percent in 2011 to 20.7 percent in 2013. Overall, President Watson’s graduation rate is 18.5 percent. While this is an improvement, it still means that 4 out of 5 matriculating Freshmen will not graduate within six years, fodder for the university’s critics.
7) Relations with the faculty: while this is difficult to quantify, the Chicago State Faculty Senate has returned two nearly unanimous no-confidence votes in the president in 2012 and 2014. In addition, the Faculty Senate voted no-confidence in President Watson’s choice for Provost in 2014.
8) University’s Image--Relations with the media: Again, this is difficult to quantify but it seems reasonable to assert that Chicago State’s media image has deteriorated dramatically in the past five years. The Watson administration has generated a number of scandals and the president now speaks only to the sympathetic press, basically refusing to speak to the major city dailies.

As he has done consistently almost since the beginning of his presidency, Wayne Watson fails to perform adequately in sections 2.04.b.(1), 2.04.b.(3), 2.04.b(5-7). In addition, his success in 204.b.(2) is mitigated by the drop in enrollment for first-time, full-time Freshmen and the basically flat retention rate for that same student cohort.

As far as 2.03.a., “General Leadership for the University,” President Watson has demonstrated a number of troubling administrative practices that have resulted in dramatically increased administrative ranks and a remarkable centralization of administrative control in the president’s office. Some relevant data will reveal the accuracy of this assertion. This data is based on a comparison between the budget of 2008-09 and 2013-14:

First, remember that the university’s enrollment has declined by 16.4 percent during this time period. These positions are positions supported by either tax revenue or local income (tuition, etc.) and are part of the budget appropriation. Unappropriated positions are not included in this survey.

Along with the dramatic increase in Chicago State’s administrative ranks has come a reorganization of the university’s budget units, putting more and more control directly into the hands of President Watson. 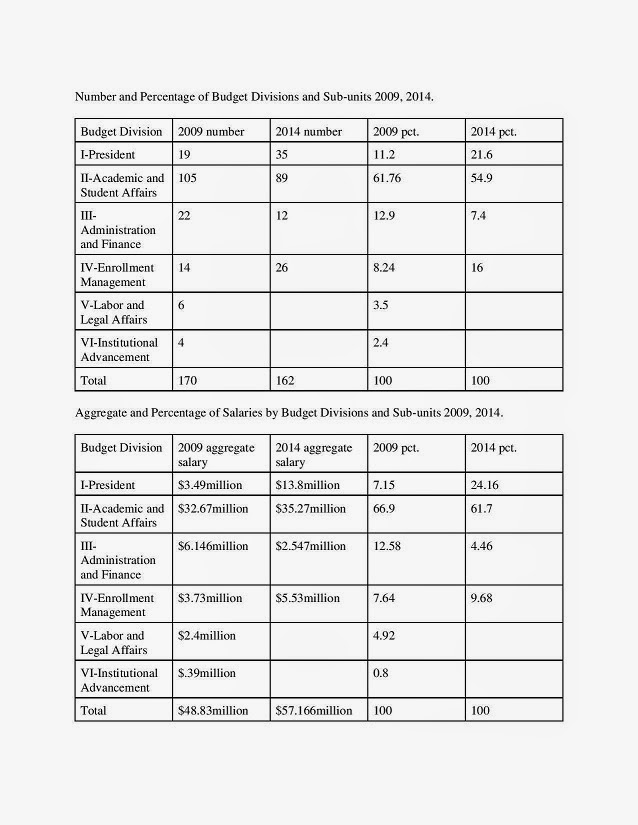 Several things about these numbers stand out. First, the president’s office has absorbed a number of sub-units previously existing elsewhere. Most notable are the University Police (from Labor and Legal Affairs), Buildings and Grounds (From Administration and Finance) and of course Labor and Legal Affairs is no longer a free-standing budget division, but part of the president’s office. The percentage of aggregate salary increases from 2008 to 2014 for the various sub-units are as follows: Salaries in the president’s office have increased 395 percent; for academic affairs, 7.9 percent; for Enrollment Management, a 48.3 percent increase. In contrast, for Administration and Finance, salaries decreased by 41.5 percent.

The sum of all this is that Wayne Watson’s performance as Chicago State’s president has resulted in more failures than successes and his willful transformation of the university into a haven for well-connected administrative hires seems directly related to a number of the woes experienced by the school. While Wayne Watson has failed to achieve the goals set for him by Chicago State’s board, he has clearly been successful in dramatically increasing the administrative ranks while the school bleeds students. Do you think we’re better off now than we were five years ago?