As most regular readers know, this forum has given considerable attention to the enrollment decreases that have plagued Chicago State since the beginning of the Watson administration. The numbers are familiar: from a peak of 7362 in fall 2010 (the beginning of Watson’s first full year as president), enrollment dropped to 5701 in fall 2013 (fall numbers are the official enrollment numbers reported to IBHE and IPEDS). This decline represents a 22.6 percent downward trend. Since I have presented these numbers as aggregate totals, the time seems propitious for a more detailed analysis of where the enrollment problems exist at Chicago State. All of the material that follows is drawn from either the Chicago State 2013 Factbook, or the 2015 ISL Forms, both available on the Chicago State website.

Graduate enrollment has declined from 1687 students in fall 2010 to 1361 graduate students in Fall 2013, a drop of 19.3 percent. Undergraduate enrollment dropped during the same period from 5675 to 4340 students, a 23.5 percent decrease. Demographically, almost the entire drop of 1661 students between 2010 and 2013 is attributable to a dramatic decrease in the number of Black students (1633 total) in the last three years. All other demographic groups combined decreased by 28 students over that three-year period. Thus, the decline in Black enrollment at Chicago State since 2010 stands at 28 percent, the decline in the enrollment for all other demographic groups is 1.8 percent. 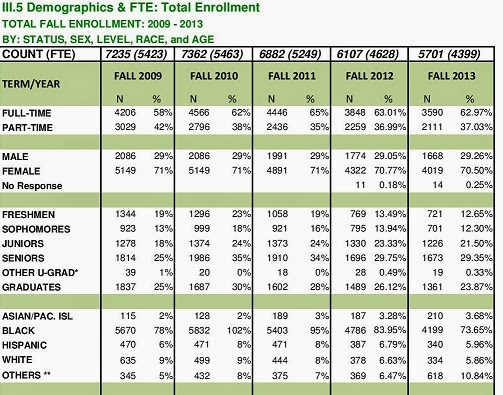 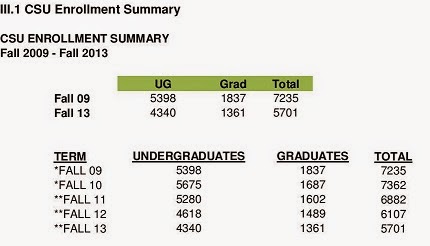 You would not know any of this if you read the university’s 2015 Fiscal Year report to the Illinois State Legislature. In a memorandum from the President’s Office, Chicago State's administration provides “a few examples of how Chicago State University continues to improve school readiness and success.” A laundry list of endeavors follows. The memorandum extolls the university’s “significant increase in its fall to fall retention rate,” using the fall 2011 and fall 2012 entering Freshmen classes as data for its assertion. The memorandum goes on to claim “Increased enrollment of students in its new programs Masters of Science in Public Health and Masters of Science in Nursing in Fall 2013,” and provides “Enrollment Metrics” as a gauge for measuring the success of its enrollment, retention and graduation goals. Any legislators reading this rosy analysis would think things were going well at Chicago State. However, a look at the actual figures demonstrates the emptiness of Watson’s claims. They seem to fool the rubes in Springfield, however. 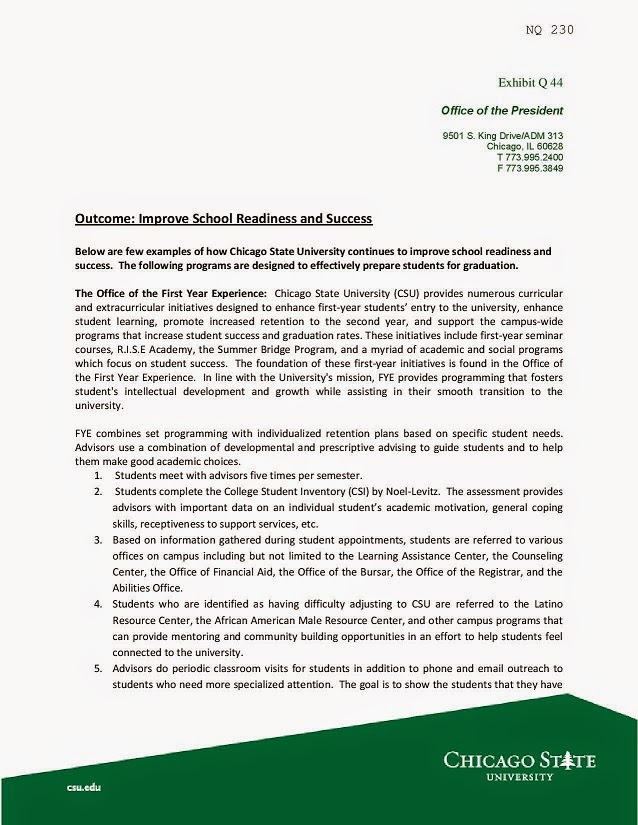 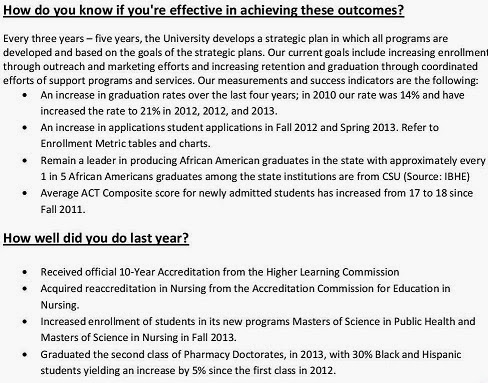 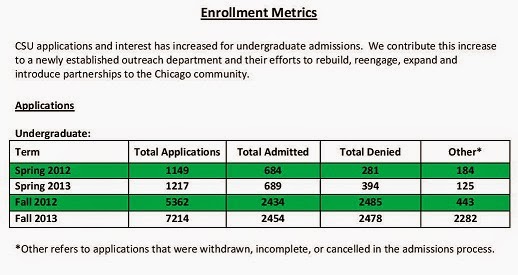 Looking at the figures for retention rates reveals that the university experienced a drop in First-time full-time Freshman enrollment of 169 (432 to 263 or 39.1 percent) students between fall 2011 and fall 2012. This number dropped further, to 225 in fall 2013. Thus, the modest increase in retention is offset by the drop in the total number of full-time Freshmen. Altogether, enrollment of first-time Freshmen has decreased from 523 to 225 from 2010 to 2013, a drop of 57 percent. As far as the Master’s programs cited by Watson, the 2013 Factbook does not even record any enrollments for the Master of Science in Nursing, while the Master of Public Health increased from 4 students in 2011 to 17 in 2013, hardly offsetting the aggregate drop of 241 graduate students during a similar time period. Finally, Watson uses the nonsensical “metric” of admissions to assure the Illinois legislature that all is well with Chicago State's enrollment. The memorandum attributes the school's success in this area to “a newly established outreach department and their efforts to rebuild, reengage, expand and introduce partnerships to the Chicago community.” Unfortunately, despite sharp increases in applications and admissions, students are not attending Chicago State. A glance at the 2013 Factbook demonstrates that clearly: while admissions are up, enrollments are down.

While readers are free to draw their own conclusions as to the meaning of this data, I suggest that two things stand out: 1) predictably, Watson is putting the best light possible on disastrous enrollment trends. This includes cherry-picking data to make ridiculously attenuated claims of success. 2) the constituency most affected by the Chicago State’s problems of the last three years are Black students, who are simply providing their assessment of Watson’s effectiveness by leaving the university in droves. As I have stressed in previous posts, the enrollment decline at this school is potentially catastrophic. Does anyone believe that our current administration will be able to staunch the bleeding?