Battered, Choked and Arrested at a Public Meeting. Why You Should Contribute Whatever You Can to the Defense Fund at: http://www.gofundme.com/9ltbnk

As a follow-up to Pancho’s post, I am asking as many of you as possible to contribute to the defense fund set up to help Willie Preston and Jokari Miller defend themselves from the university’s attempt to use the police and the courts to shut them up. Jokari Miller’s arrest documents demonstrate why your support is vital.

Here’s the FOIA request I submitted to Chicago State University on May 15,2014: 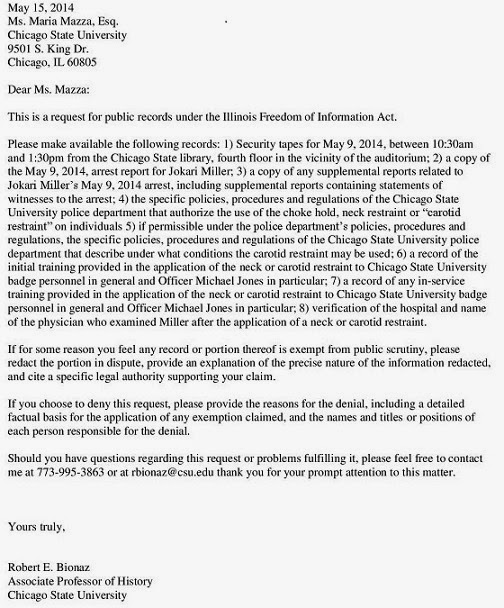 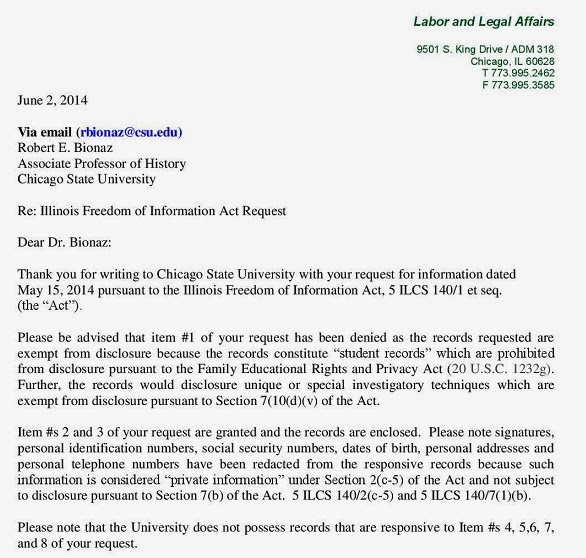 Here’s a copy of the police arrest narrative:

In my estimation, the notable portions of this response are several: 1) given the FOIA request, there are apparently no supplemental reports or witness statements included in the document package created by the police; 2) although the university seems to have security tapes of the incident, they are withholding them based on the assertion of exemptions that I have asked the Public Access Counselor to review; 3) the narrative report differs markedly from accounts provided by witnesses to the incident. In particular, there is no mention of the police officer applying a carotid restraint or “choke hold” to “subdue” Jokari Miller; 4) there is no extant Chicago State police policy permitting the use of the carotid restraint; 5) the Chicago State police department has no record of any training in the use of the carotid restraint for the arresting officer or any of its sworn personnel; 6) although the carotid restraint is potentially lethal if improperly applied and, in certain cases even if correctly applied), the Chicago State police failed to have Jokari Miller examined by a physician after the application of the hold.

The carotid restraint, permitted by most police agencies in the 1970s and 1980s, was and is highly controversial because of its potential deadly consequences. If improperly applied, the bones in the throat can be crushed. Even when properly applied, the potential exists for subsequent heart failure because of the over-stimulation of the vagus nerve. In my academy training, I learned the technique for the carotid restraint then never used it in nearly 23 years of law enforcement work. Frankly, as a form of “non-lethal” restraint, I found that its risks far outweighed its potential benefits.

If you agree that initiating a confrontation then choking and arresting a student because he or she is wearing a baseball hat at a public meeting is somewhat heavy-handed, and/or if you agree that ginning up orders of protection then criminal charges to file against another outspoken student critic of the administration is out of proportion to the alleged offense, please help.

Posted by Robert Bionaz at 5:13 AM