Wayne Watson Apparently Has Some Questions About the Recent Senate Balloting

It did not take long for the administration to respond to the results of the recently conducted balloting on the amendments to the Faculty Senate Constitution.

You might remember the original memorandum, sent from Watson to several hundred members of the university community on January 28, 2014. In his memorandum, Watson expresses his great concern for the failure of the faculty senate to follow established processes for amending its constitution. In particular, Watson's memorandum quotes article IX of the senate's 2011 constitution which specifies the procedure for amending the document. Watson believes that "it is important the status of this issue to the general faculty body of CSU." Hence, the mass e-mail. In his January 28 communication, Watson gives the faculty senate until February 26, 2014 to "follow the process above to make amendments as prescribed in the Faculty Senate's 2011 Constitution." If the senate fails to follow Watson's demand, the university would then ask the "faculty-at-large to make a determination as to how it wishes to participate in the governance of the university." Watson then waxes enthusiastically about the Faculty Senate, claiming that "the work of the Faculty Senate is of great value to the University," adding a strange and somewhat opaque qualifier "since it is a mechanism that should promote inclusiveness and shared governance." Finally, Watson expresses his optimism that "by working together we can overcome these hurdles." Unfortunately, Watson neglects to mention to which hurdles he refers.

Since it is often impossible to know what motivates someone's behavior, I will refrain from speculating as to the actual meaning of Watson's January 28 memorandum. What can be said with some degree of certainty is that it constitutes a threat to the existence of the Chicago State University Faculty Senate. Watson will eliminate the body unless the processes and timetable outlined in the memorandum are followed. Personally, I am on the record as agreeing with the administration's position that the changes to the Constitution do constitute amendments and that the appropriate procedure should, indeed, be followed.

In response to Watson's memorandum, the Faculty Senate moved to properly amend its constitution. The proposed amendments went out in writing to members of the Senate with more than the required period of notification between the dissemination of the information and the next regularly scheduled meeting. At that meeting, a quorum of senators voted unanimously (with four abstentions) to approve the amendments and send them to the unit A faculty for a vote. The voting took place between February 11 and 18, 2014, and resulted in an overwhelming affirmation of the changes in the Senate's constitution. The Senate president communicated the results of that balloting to Watson on February 24, 2014.

On February 25, 2014, Watson sent another memorandum, this time not distributed to the university generally. This memorandum, directed to the Faculty Senate president and copied to a number of administrators, requests clarification on six specific points, none of which appeared in Watson's memorandum of January 28, 2014. They are: 1) the dates of the election; 2) "a description of how the election was conducted"; 3) an opportunity to "view" the "originals of all ballots"; 4) "a list of persons responsible for counting the ballots"; 5) a copy of the original Constitution with "highlighted" changes; 6) the method used to determine "which faculty were eligible to vote." Watson's memorandum demands (he does say "please") that the senate provide this information no later than the end of the day on Thursday, February 27, 2014.

Again, I will not speculate as to the motive(s) behind this memorandum as I prefer to allow the reader to draw her/his own conclusions. I will, however, ask why the administration feels this information is necessary? Why does it need it immediately? It is simple enough to provide a response to the six requests, but there is nothing in the 2011 Faculty Senate Constitution that requires that body to seek approval from the Chicago State administration for the conduct of an election. The only requirement in article III is that the election be by "ballot," which is unspecified as to form. The constitution describes no specific procedure, something that the administration must (or should) know. Really, all the administration needs to know is the final result of the balloting. In the case of the recent balloting on the Faculty Senate Constitution, that result was virtually unanimous approval. I find it interesting that an administration so concerned about the senate following its procedures apparently wants to evaluate the actions of that body, an incursion into the realm of faculty governance that seems both unnecessary and unwarranted. I have attached both memorandums for your perusal. 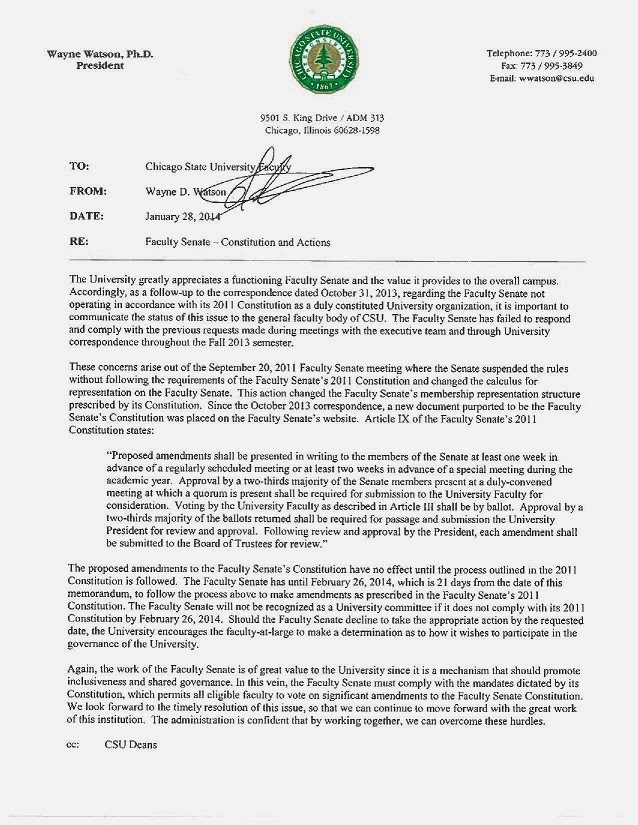 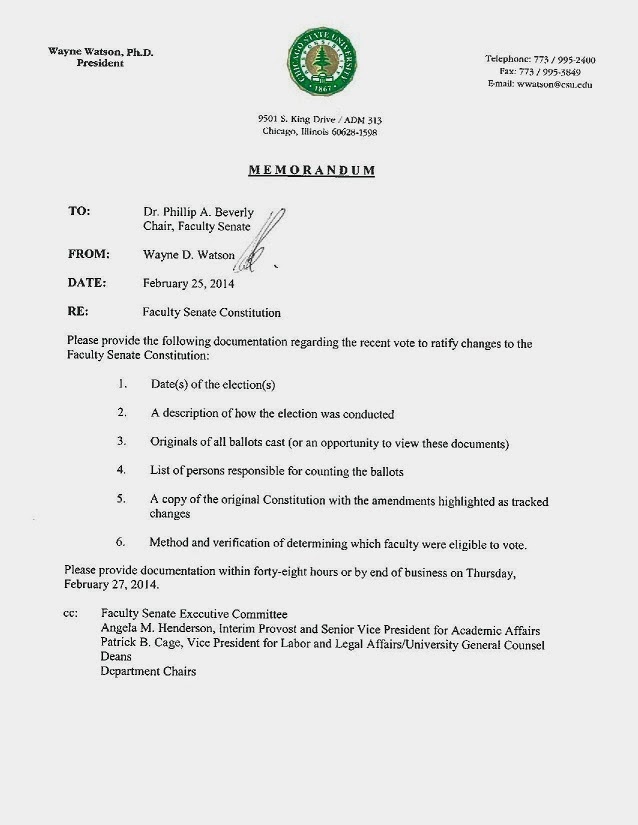