Guess Who Won the Lawsuit Filed by James Crowley?: Chicago State Hammered at the Cost of Millions of Dollars. Congratulations to Wayne Watson!

Remember James Crowley? Our tough-guy president, Wayne Watson, fired him in 2010 for complying with Freedom of Information Act requests. According to Crowley, Watson "pushed him to withhold [documents] from faculty and the Chicago Tribune about Watson's employment at the school." In a conversation with Crowley about the documents, Watson grabbed his wrist and said: "If you read this my way you are my friend. If you read it the other way, you are my enemy." So, in this instance, the man his attorney called "genteel" in March 2013, acted like some kind of character out of a Mario Puzo novel. For his part, Patrick Cage "called Crowley's allegations 'unfounded' and the lawsuit 'meritless'". For the quotes, see: http://articles.chicagotribune.com/2010-11-16/news/ct-met-chicago-state-lawsuit-20101116_1_wayne-watson-james-crowley-termination-letter.

Recently, the university informed the Illinois State Legislature that it "expected to prevail" in the Crowley suit. You can see the university's statement here: 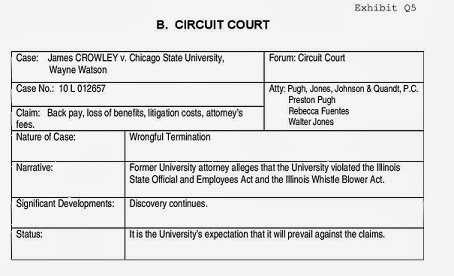 The jury in the Cook County Circuit Court was apparently unimpressed. Here's the result:

That means that Jim Crowley won. Of course, after a judgement for a plaintiff, the question of monetary award must be decided. Juries typically award nominal damages of they feel the offense is not too serious or substantial awards if they find the defendant's behavior egregious. This jury apparently found Wayne Watson's behavior somewhat problematic, judging from the amount of the damages awarded to the plaintiff:

This looks like $2,480,000 to me. I am not sure if that includes other various and sundry costs like attorney fees and court costs. If not, the actual cost to Chicago State will be considerably more than $2.5 million. Here are the participants who suffered the loss in this somewhat expensive case: 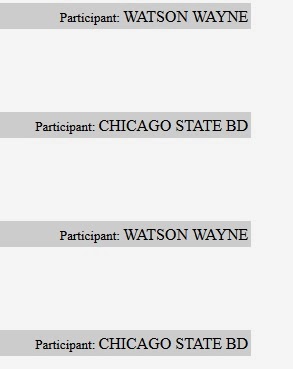 So a hearty congratulations to Wayne Watson, whose disregard for the law and failure to act like a responsible adult has cost the university dearly. I wonder if the Board of Trustees should convene another special meeting to again express their support for this utter failure and his cynical "vision" for Chicago State. Truly, if Watson had been charged with the destruction of this university, he could do no better than he has done. Anyone interested in looking at the entire case docket can find it here: https://w3.courtlink.lexisnexis.com/cookcounty/Finddock.asp?DocketKey=CABA0L0ABCGFH0LD