So I often read a column in the Washington Post that fact checks statements made by various politicians. It confirms the statements and then determines the veracity of those statements and then assigns a number of Pinocchios based on the level of deception. Four Pinocchios is essentially a “liar, liar, pants on fire” ranking. With that said I was curious at a memorandum that I received today notifying the university of the appointment of department chairpersons. This once tri-annual process is now an annual farce perpetrated by the unabashedly corrupt Watson administration on the university. At real universities, something the current incumbent has no experience of, the faculty of each department elect a chair person and that person is confirmed (or not) by the dean of the college. The chairs work for the deans. At Crony State, the chairs are hand picked by the president, a practice unheard of at other universities. So faculty go through the farce of electing a chair only to have in some occasions that decision overturned by an inept and failed president. To wit, please note the following memorandum. 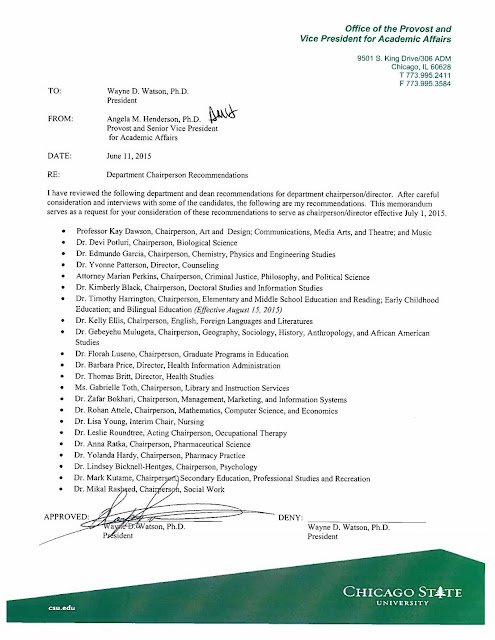 There are two key pieces of information on this memo. The first is the date and the second is the first line of the memo. So let’s look at the second piece first. The sentence reads “I have reviewed the following department and dean recommendations for department chairperson/director.” That is pretty straightforward except that it is a lie. That leads to the second key piece of information. It is impossible for Angela Henderson to have reviewed a recommendation from my department that didn’t happen until June 23rd when my department met for its chair election. Thus a memo dated June 11th that states that a departmental recommendation was made for the person selected would be a lie and that would make that person making that statement a liar. I, like several of my colleagues in my department are curious whether the administration has developed the ability of precognition and knew 12 days in advance what the decision of the department was vis-a-vis the chairperson. Obviously not. Because in my department it was another faculty member who received the majority of the votes. The memo also states “... interviews with some of the candidates..” Why were any candidates interviewed by the Provost? The chairs don’t report to the Provost. Why weren’t all of the recommended faculty interviewed. Oh, because the decision was made prior to the faculty electing their peer, at least in my department. So not only was the process a ridiculous farce, but the administration made no pretense of adhering to the principles of shared governance inherent in this process. Thanks to Provost for putting in writing the continuing absurdity of this administration. And thanks to the Board of Trustees for allowing this farce to continue unabated for several years.
For your efforts,

Another interesting tidbit is that for one of the departments the interim chairperson is also the Dean of that college. That would appear to be a conflict of interest, at least in terms of personnel actions. Giving one person two bites at the personnel review apple seems to be unfair and could jeopardize the university should something untoward happen to a faculty member in a personnel action.
All in all, more shenanigans from the administration that put the B in buffoonery.
Posted by Phillip Beverly at 8:00 PM