Because of his time spent in student government, Willie Preston knows a fair amount about the inner workings of the Chicago State administration. For at least the past year-and-a-half, he has been working diligently to expose administrative incompetence and corruption at this school. This marked him as a dangerous man, at least for the most culpable members of the Watson administration. The threat Preston represented made it imperative that the administration find a way to get him off campus and shut him up. However, the administration cannot prevent Willie Preston from requesting public information through the Illinois Freedom of Information Act. Thanks to that effort, Willie Preston has uncovered evidence of financial impropriety and a subsequent cover-up that grew out of the mishandling of student money. This and subsequent posts will detail what he discovered and provide evidence supporting a number of assertions.

A few days ago I received this e-mail from Willie Preston:

Lots of lies, and lots of irregular financial dealings from this administration. My apologies, I almost forgot that people who engage in this type of behavior don’t appreciate being characterized in these terms, so let’s just leave those descriptors for the lower class folks. As a leader in the Student Government Association at CSU I learned rather quickly that some within the Watson Administration, let’s just say, have a very casual relationship with the truth. Once this was established I began to engage in some pretty obnoxious behavior such as asking tough questions like, what is the Student Government Associations budget? From what sources are the budget derived? you know things that didn’t concern me? A specific instance stems from the week of Homecoming, during the CSU January 26, 2013, Homecoming Dance that Matoya Marsh oversaw, I asked Matoya Marsh why a student was allowed to exclusively collect money at the door when earlier Ms. Marsh explained to me that we (students) could not engage in such cash handling activities because it was against university policy? During this conversation, she went on to state if she allowed such activity the university would be at risk for an audit finding. So naturally after she disregarded this policy on Jaunary 26, 2013, I took what I felt was the appropriate and responsible course of action which was to report this behavior to a senior university official: Ms. Angela Henderson then V.P. of Enrollment management. Ms. Henderson verbally assured me that she would look into and take the appropriate action if any wrongdoing or mismanagement was discovered.

The e-mail refers to three specific occurrences: 1) the dance of January 26, 2013, at which a student collected money, the remainder of which was subsequently not deposited into a university account until March 7, 2014; 2) Preston’s notification of the financial irregularities of the January 26 event to then Vice President of Enrollment Management Angela Henderson; 3) Preston’s Freedom of Information Act request, submitted to Chicago State University on March 4, 2014.

This seems like a fairly straightforward request. However, the university first exercised their right to extend the time for response from 5 days to 10. Chicago State’s legal team then claimed that the records were exempt from disclosure because the Student Government Association was not a “public body” as defined by FOIA. Preston appealed the denial to the Public Access Counselor who issued a binding opinion on July 1, 2013 (PAC 14-006) ordering Chicago State to release the relevant records.

Here are pertinent sections from the binding opinion: 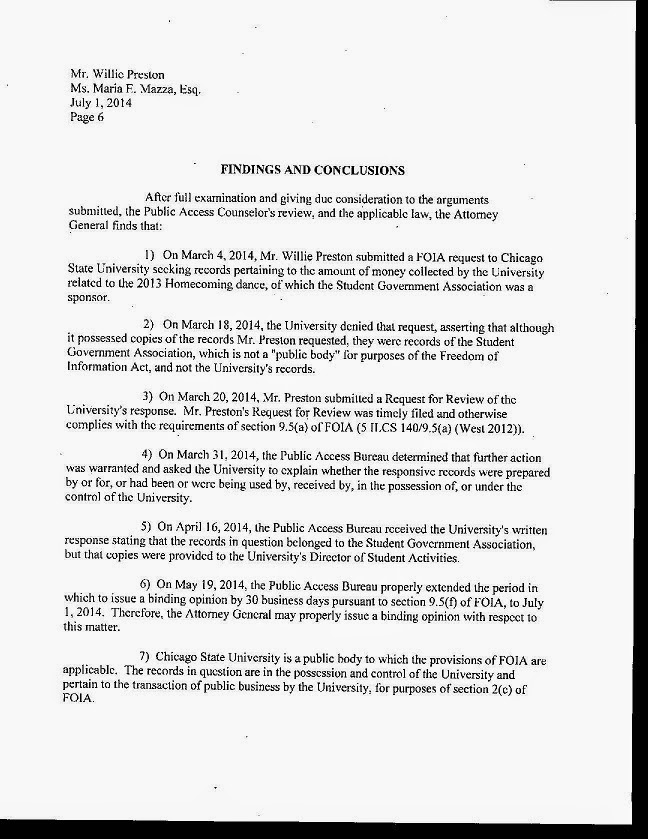 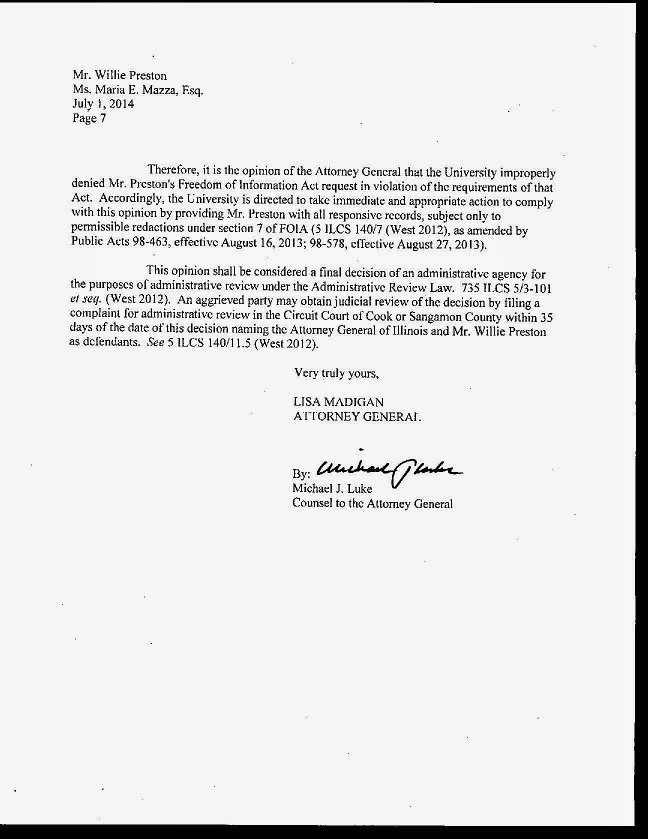 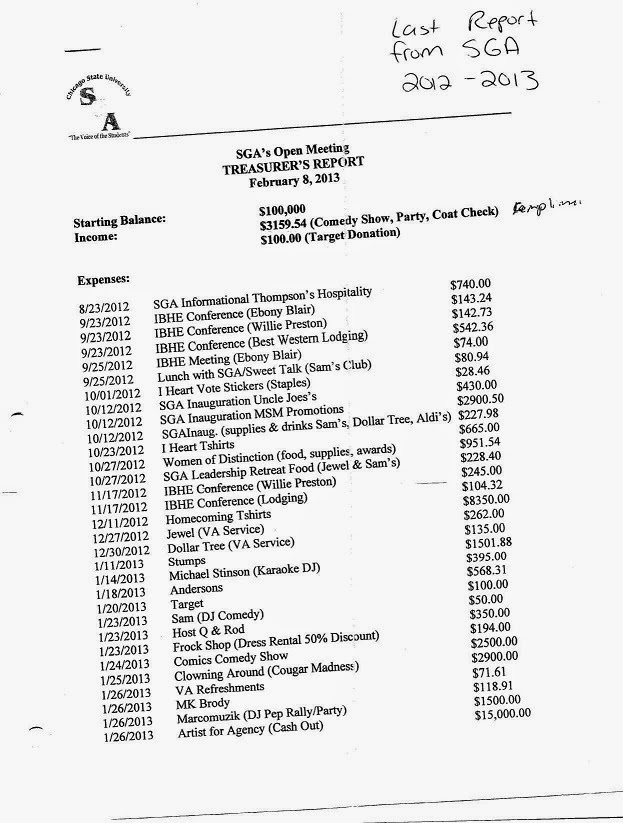 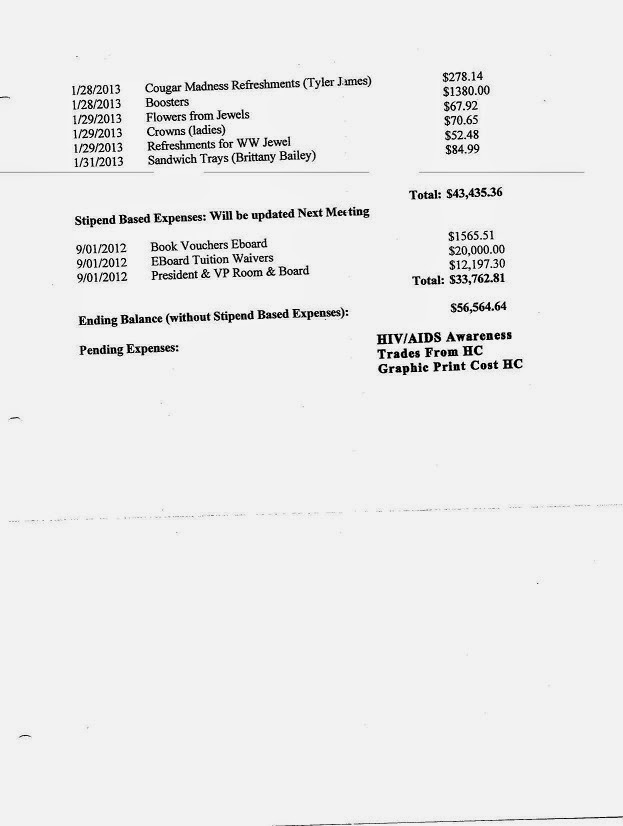 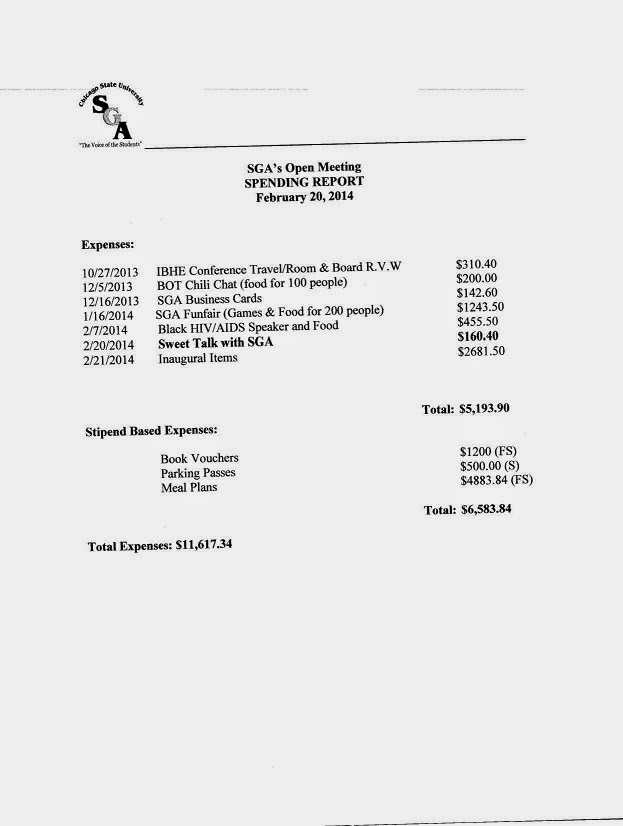 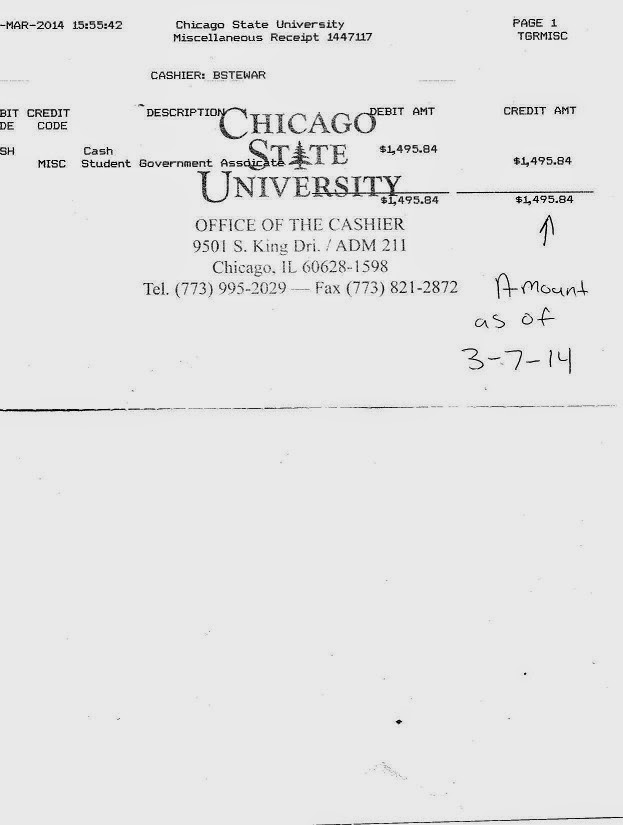 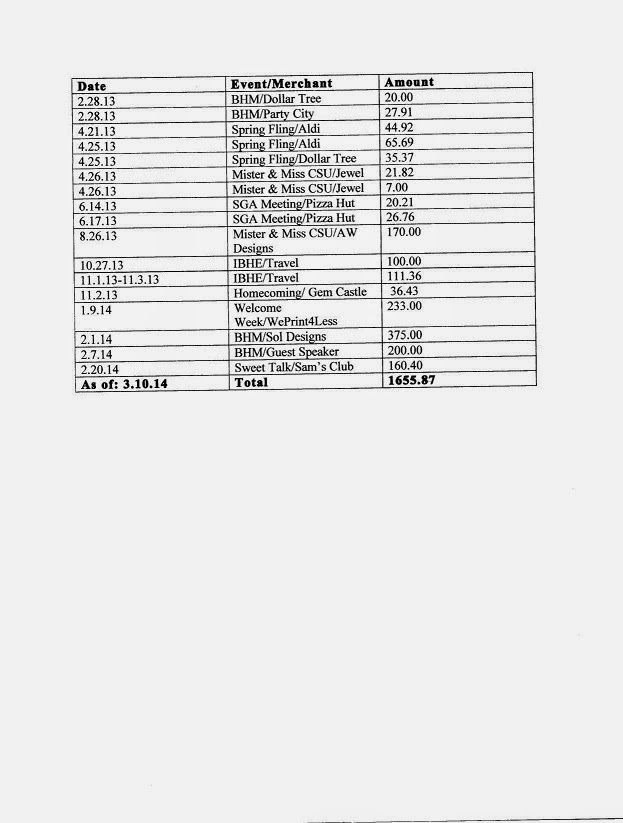 Given the innocuous nature of the documents provided by the university, the question of why it took so long to release those documents seems pertinent. Why fight the FOIA request at all? According to the material provided by Chicago State, everything looks alright, the dance raised something over $3100 and nearly $1500 remains in the university accounts. The SGA Treasurer’s report details the expenditures and things look neat and clean. However, as is often the case at Chicago State, reality is completely different. In subsequent posts, I will examine the differences between the documents provided by Chicago State which paint a picture of appropriate processes and the reality of additional documents obviously withheld by the university which offer a completely different version of events between January 2013 and March 2014. The real story is one of of incompetence and the lies used by the university to conceal a case of fiscal mismanagement.