Teetering On The Edge

So loyal readers, I believe many of you were distressed at discovering the university’s status vis-a-vis the US Department of Education and student financial aid. Being placed on Provisional Status is not necessarily an indicator of an institution's failings. Some institutions end up on provisional status for reasons beyond their control. For example, a state university has no control over its audit process and the release of its annual audit report. Federal regulations require submission of an audit report within a certain time period. The institution doesn’t control when that report is submitted, thus it may find itself in violation while having no problems in the financial aid area.
Chicago State University is another matter however. The Department of Education report cites “...serious, repeated or systemic deficiencies that directly relate to the regulatory elements identified in 34 CFR § 668.16." The Final Audit Determination, received by the administration on April 9th, 2014, informs the university that "Due to the serious nature of one or more of the enclosed findings, this final audit determination has been referred to the Department’s Administrative Actions and Appeals Service Group (AAASG) for its consideration of possible adverse action. Such action may include a fine, and/or the limitation, suspension, or termination of the eligibility of the institution." 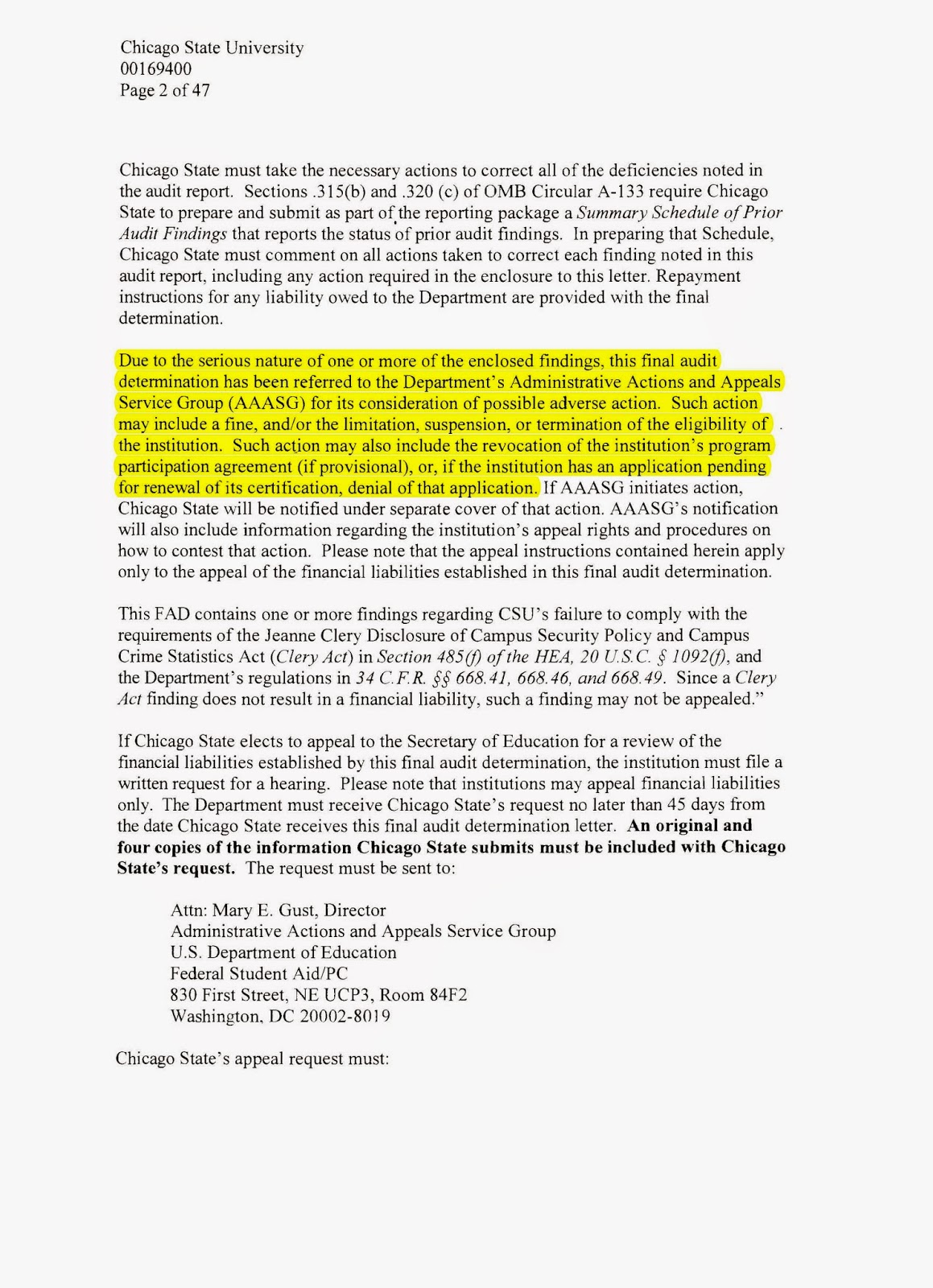 Fines are fairly common methods of ensuring compliance. The university already has been placed on Provisional Status but it is the last two possibilities that are potentially the most serious. Suspension or termination of eligibility would undoubtedly force the closure of the university. Ninety percent of CSU students receive federal financial aid. Losing the ability to receive federal financial aid would undoubtedly force the closing of the university. Placing the university at risk in this way should warrant serious inquiry by the university’s Board of Trustees. Yet the Board has been remarkably silent on this issue, either because they don’t know anything about it, don’t understand the ramifications or worse, don’t care to know.
One of the findings in the report, #12-7 – Student Financial Aid Awarded to Student at Unreported Locations – Repeat Finding, is of grave concern given this administration’s unwavering compliance with a legislative mandate to expand the university to the West Side of Chicago, even in the face of declining enrollments. The charge ahead without consideration of implications has been a hallmark of this failed administration. The university is at grave risk “suspension or termination” should it decide to press ahead with a West Side Campus without garnering the approval of the Department of Education. Provisional Certification requires department approval whereas Full Certification does not. Especially telling is this statement: “In June 2012, CSU submitted its application for recertification and in the application CSU reported 12 additional locations. The Department requested the accreditation and state approval for all of the additional locations and CSU indicated that they were not aware that accreditation approval and state authorization was required.” 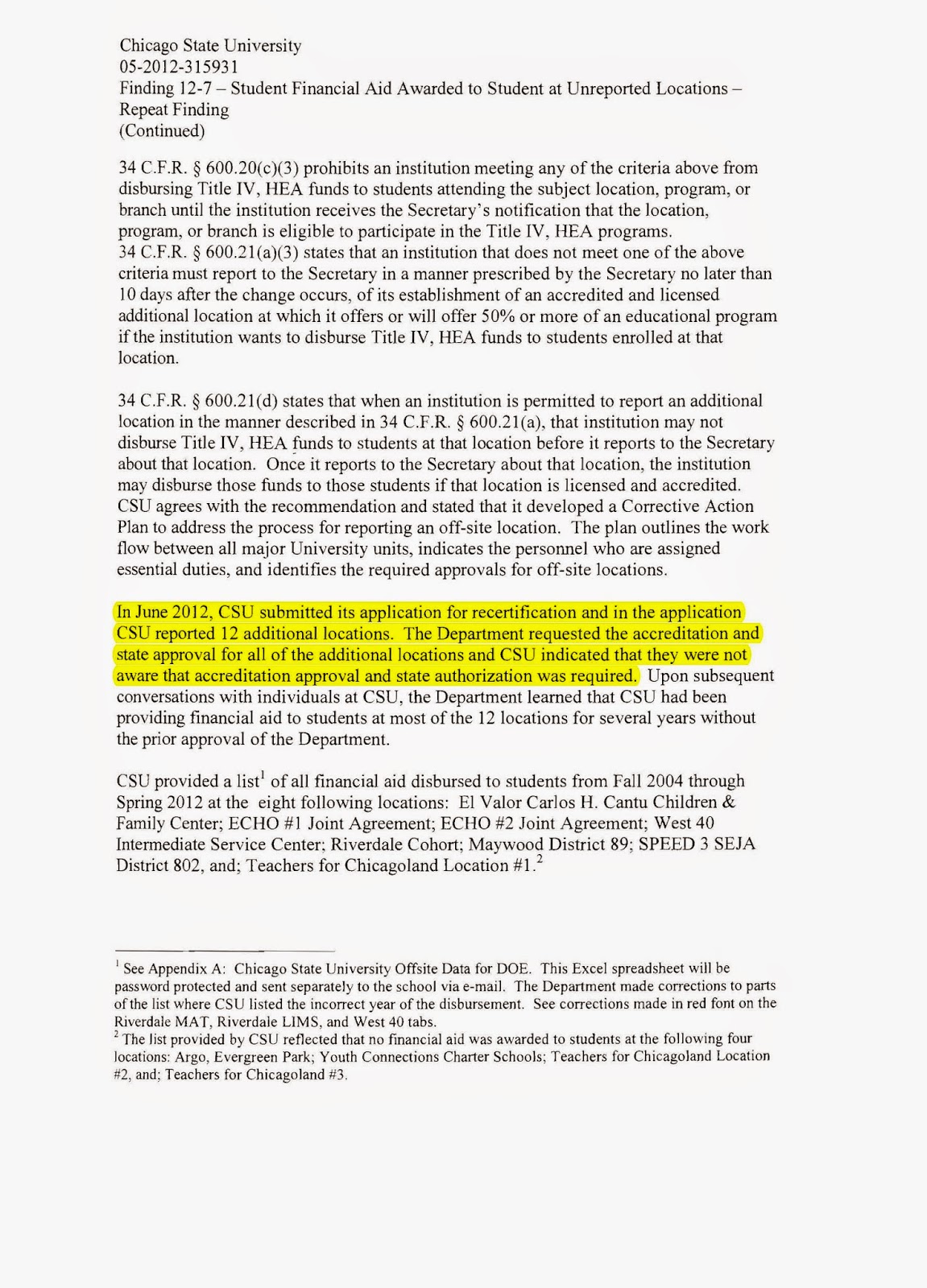 How could the university not know what the federal regulations are? Where is the institutional memory of CSU? How does a university that has been in existence for nearly 150 years function like this?
More disturbing evidence is revealed in Finding 12-10 – Inadequate Controls Over Submission of Loan Related Documents and Notices. Why the university would need to be reminded of its due diligence responsibilities and its ultimate responsibility for compliance is beyond my understanding. 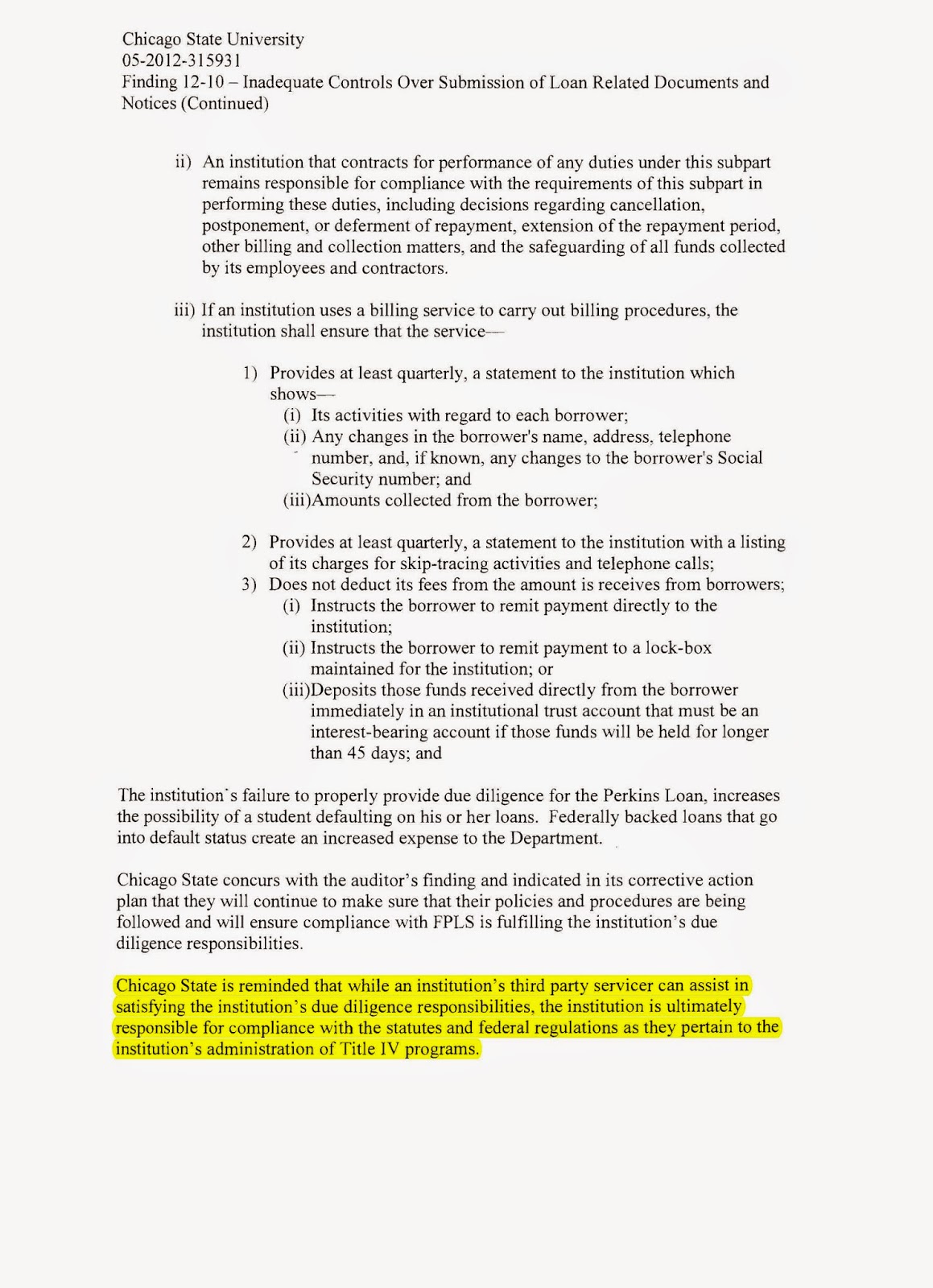 Equally telling about the failures of the administration is its failure to comply with federal laws, namely the Clery Act. It was your humble narrator who several years ago brought this matter to the attention of the Board of Trustees, reminding all in attendance of the serious implications for not following this law. Lo and behold an audit finding emerges for not complying with the Clery Act. I was asked by one of my colleagues why I would bring such matters to the Board during public and employee comment. I responded that I felt obligated to assist the institution in not getting audit findings and would be professionally negligent by remaining silent about issues I have some knowledge of or expertise about. The report’s language is unambiguous.  “Although the finding is now closed, CSU is reminded that the exceptions identified above constitute very serious violations of the Clery Act that by their nature cannot be cured. There is no way to truly "correct" violations of this type once they occur.” 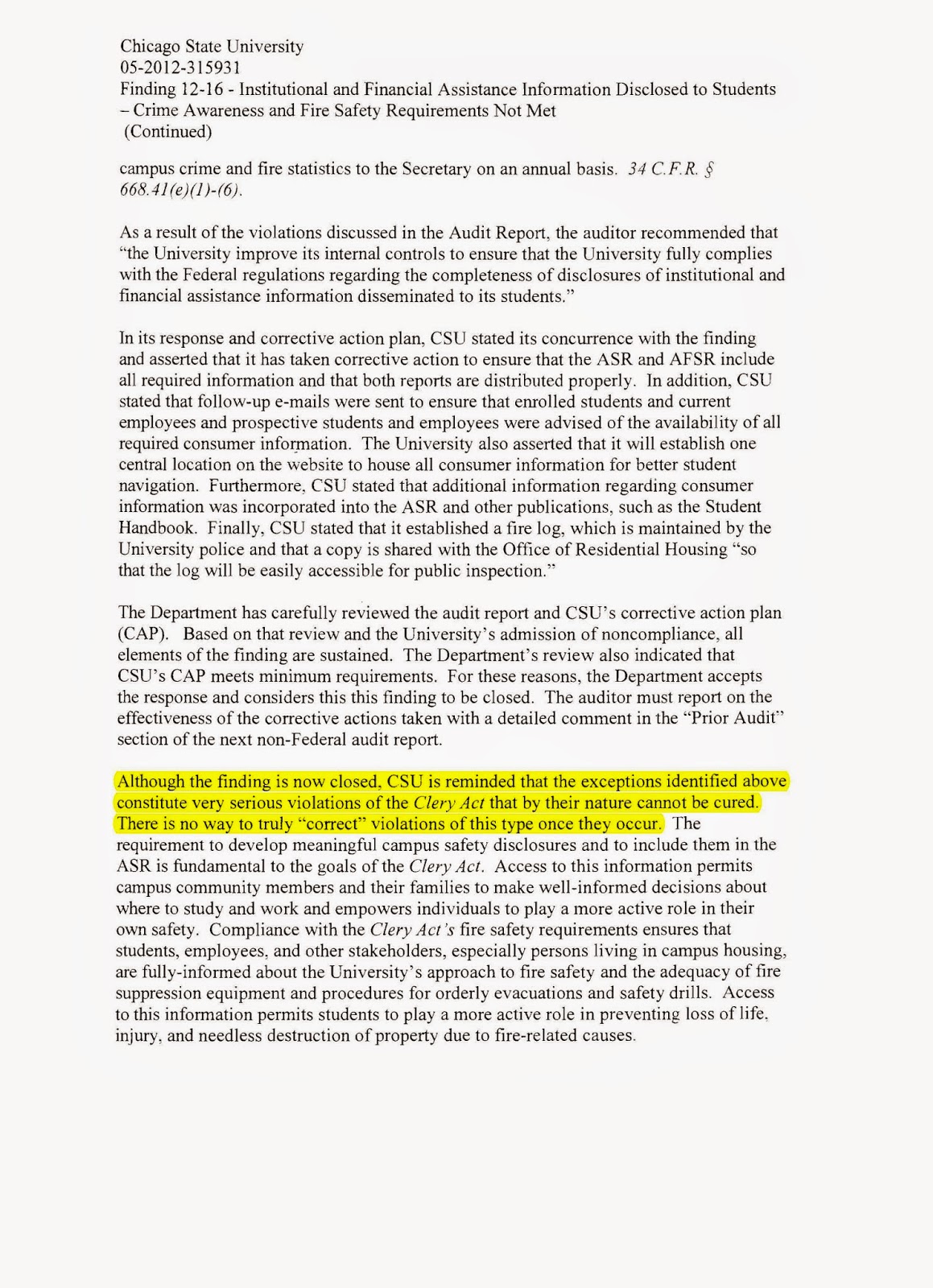 So with the clear presentation of evidence, what assurances do the taxpayers have that this administration has the capacity to correct the numerous systemic defects, especially given the outflow of institutional memory during this administration. Unfortunately, there are no assurances. Failure upon failure leading to where the university is positioned today have led the Board to reassert its confidence in failed leadership. I believe that the taxpayers could be better served if elected officials had the political courage to stop the charade that is Chicago State University and demand that it be what it says it is.
Posted by Phillip Beverly at 11:19 AM