We've Seen All This Before. The CSU Clowns Weigh In On the University's Leadership

Here is the latest shot in the developing war between the Watson forces and Paul Vallas, who they have obviously identified as the most serious threat to their sinecures. This was distributed to Civil Service employees yesterday. 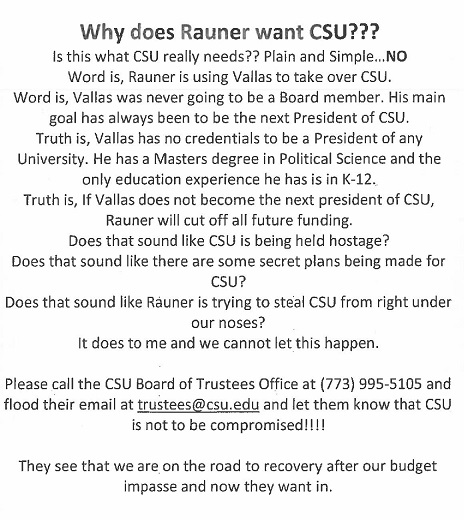 This is a classic case of creating a narrative out of lies then repeating the same lies over and over again. You might notice that almost the entire broadside is fact-free. I will focus on some of the more absurd pronouncements. Let’s start with the title. Indeed, why would Rauner want CSU? The answer? Because it’s part of a grand conspiracy to take over the University. As with all conspiracies, the absence of evidence simply proves the existence of the conspiracy.

Here’s the evidence: “Word is, Rauner is using Vallas to take over CSU.” “Word is, (Vallas’s) main goal has always been to be the next president of CSU.” Really? Is that a desire he’s had since childhood? And who exactly is responsible for the “word” being cited here? As usual with the Watson cronies, all this nonsense is anonymous.

The next gem is this: “Truth is, Vallas has no credentials to be a President of any University. He has a Master’s Degree in Political Science and the only education experience he has is in K-12.” Vallas is perfectly capable of defending himself here, I will only say that our current interim President is the poster child for someone with no qualifications serving as a University President. At least Vallas has degrees in academic disciplines (History, Political Science). Lucy is simply a bean-counter, his education consists of a bachelor’s in accounting, an MBA, and a J.D. In terms of experience, Vallas has managed huge school districts in major U.S. cities (I seem to remember that the experience managing a large educational enterprise was one of the items used to defend the selection and continued tenure, despite multiple scandals and disasters, of the execrable Wayne Watson). Lucy has served as a financial officer for a variety of employers, including stints as the CFO of two Universities with enrollments under 4,000.

Moving along, we next encounter the unsubstantiated accusation that Rauner will withhold funding if Vallas is not put into the President’s position. This has been vehemently denied by the Governor’s office and until there’s some independent verification of that assertion, it’s worthless. Next we come to the part about “secret plans.” What the hell are those? Then this question: “Does that sound like Rauner is trying to steal CSU from right under our noses?” Whose noses? The broadside’s author fails to make that clear.

The broadside’s final gurgles seem more like irony than anything else. Is the author trying to be humorous? First, there’s the assertion that “CSU is not to be compromised!!!” If there’s a more compromised educational institution in the United States, I’d like to know where it is. Finally, I did not realize that “we are on the road to recovery.” I imagine that anyone attending the last Board meeting or paying the slightest attention to the ongoing ineptitude of our administrators would find that assertion somewhat less than credible. We are in freefall.

Readers are free to draw their own conclusions about what all this means, but I have some observations. As always, any interpretive errors are solely mine. First, I’ve seen this act many times in the past. Anonymous accusations supported by nothing more than empty assertions. Second, using surrogates to get your message out is nothing less than intellectual cowardice. I’m sure that the person who distributed this nonsense would claim authorship. That’s bullshit. This garbage came straight from someone highly placed in this University, or perhaps a gaggle of someones who simply don’t have the courage to expose their self-serving selves to public criticism. Third, I find it interesting that persons who cannot raise their voices to oppose the elevation of unqualified hacks to the presidency of this University can be so vocal about their objections to Vallas. Where were you while the Watson administration tore this institution apart? When the Board destroyed Thomas Calhoun’s (someone with actual qualifications for the job) presidency ? When they rewarded administrators who worked assiduously to undermine Calhoun’s administration? Silent, huh? Why so loud now? How is Vallas different from Wayne Watson, Angela Henderson, or Cecil Lucy?

Finally, I want to be clear about how I, and a number of my colleagues, feel about the direction in which this University is headed. We are dismayed that the same persons who have taken us to the brink of destruction remain in place. We are angry that the Interim President is obviously willing to let the University sink rather than make the hard personnel choices that must be made. We are disappointed that no one has been held accountable for their multiple administrative failures. We are concerned that each day that passes makes a viable solution to our crisis more difficult to achieve.

I’ve made no secret that my preference is for Thomas Calhoun’s reinstatement. I believe he deserves to be given a chance to lead this university out of its morass. However, if that course of action is not possible, I want to be clear that if the choice comes down to Cecil Lucy and the Watson cronies or Paul Vallas and a new set of administrators as the interim leaders of this institution, I’ll take the fresh faces over the wretched old gang.

Posted by Robert Bionaz at 6:01 AM