What Would Chicago State Look Like Without Any Students? Based on the Administration's Financial Aid Compliance Efforts, We May Soon Find Out

I am sorry to disturb the slumber of those of you who are trying to awake from the nightmare that has been the Watson administration, but I have some alarming informarion to share with you. For people who have paying attention to the never-ending saga of our administration’s venality and incompetence what follows will be no surprise. If this situation is not corrected, the consequences for the school will be dire. Perhaps that is the goal—given the behavior of the Watson administration, it is hard to come to any other rational conclusion.

The most recent threat to Chicago State’s well-being comes in the form of continuing financial aid misadventures. You might remember the school became the target of a series of negative newspaper articles in the summer of 2011 for its failure to purge students who were ineligible based on their academic performance, from the financial aid rolls. Discovered by auditors, these problems represented part of a financial aid scandal, the other part was the university’s disbursement of financial aid to students at unapproved locations. All this came to light before the beginning of the 2012-13 school year.

Because of Chicago State’s various financial aid problems, on March 15, 2013, the U.S. Department of Education (DOE) placed the university on “provisional” status for the disbursement of financial aid, including Pell Grants, Perkins Loans and Work Study Programs. The provisional status extends through December 31, 2015 and the DOE communication warned Watson and Cheri Sidney (copied in the letter) that “During the period of provisional certification, the participation of the Institution will be subject to revocation for cause.”

On March 26, 2014, the DOE advised Watson of its analysis of the school’s audit findings. Included among problems cited by the DOE was the school’s failure to ensure that outside locations at which students took classes were approved by IBHE and DOE for both educational and financial purposes. The Department of Education’s audit findings warned Watson that “repeat findings in future audits or failure to satisfactorily resolve the findings ofthis audit may lead to an adverse administrative action. An adverse administrative action may include the imposition of a fine, or the limitation, suspension, or termination of the eligibility ofthe institution to participate in the Title IV, HEA programs.” The audit findings addressed in the DOE letter all came from the fiscal 2012 audit, published by the Illinois Auditor General in March 2013.

The Department of Education’s letter and the state’s audit included some disquieting passages. In June 2012, when the school requested approval for its existing 12 off-site locations, the DOE requested “the accreditation and state approval” information for all 12 sites, unidentified Chicago State officials indicated “they were not aware that accreditation approval and state authorization were required.” The state auditors discovered that the previous year’s audit findings had not been corrected because “staff was still in the midst of implementing the prior year corrective action plan and automating the process which included training on all the steps required for reporting a new location.” This level of ignorance and inaction seems astounding, given the stakes. In any event, the school apparently avoided a repeat audit finding on off-site locations in fiscal 2013. So is it safe to assume the administration (read Financial Aid which resides in Enrollment Management and is managed by Cheri Sidney) has learned how to correctly apply for approval to offer classes and provide financial aid at off-site locations? Not exactly.

The Department of Education’s letters notified Chicago State that in order to offer financial aid at off-site locations, that the school’s provisional status obligated it to seek approval from the Illinois Board of Higher Education (IBHE) for course offerings and from the DOE for financial aid disbursements before the start of any classes: “CSU [must obtain] approval from the Illinois Board of Higher Education to offer classes at . . . ineligible locations.” After approval, the university then must apply for approval to disburse financial aid at off-site locations because provisionally certified institutions are prohibited “from disbursing . . . funds to students . . . until the institution receives the Secretary’s notification” that the alternative locations are approved. So, to recap, because of Chicago State’s provisional certification, the school is required to seek approval from IBHE to offer classes at a new location, then after obtaining IBHE approval, Chicago State must apply and receive approval from the Department of Education to disburse financial aid. Failure to follow these mandated steps may result in the Department of Education terminating the school’s ability to disburse financial aid to its students. 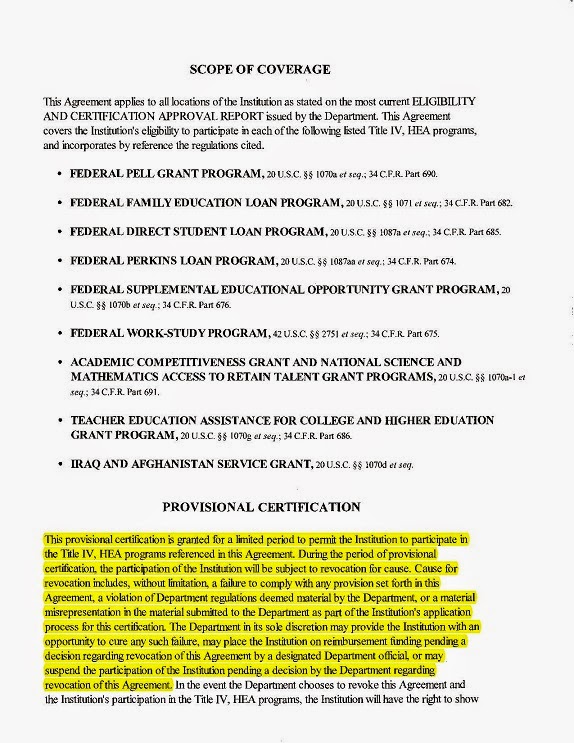 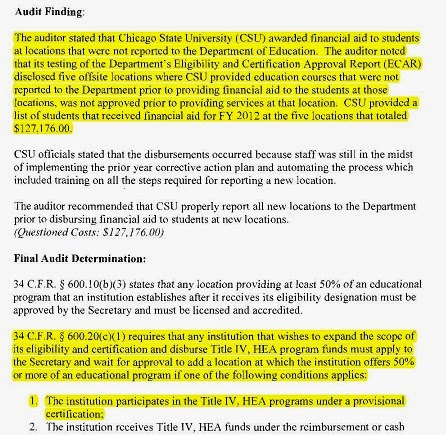 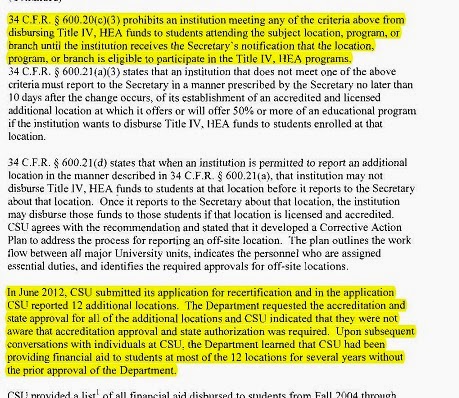 Why am I going on about this? Well, we have an incipient West Side Campus being advertised on our web site. Based on the information on our web, it seems like the university is planning to offer courses beginning in Fall 2015. However, our department recently received a communication from our Chair to get proposals in for programs/courses for the West Side Campus. Additionally, several administrators have indicated that some highly-placed administrators have indicated that courses would commence on that site (wherever it is, I’m still not sure) in January or February of 2015.

When I heard that information, I wondered whether the university had even obtained approval from IBHE and DOE to offer courses/disburse financial aid at the new site. Guess what? As of this date, we have received no approval, in fact, as of November 14, 2014, we had not even applied. So, based on our provisional status, we will need to put an application together for operating a new location and send it to IBHE for their approval. Since the programs for the new campus have not even been formalized, I cannot imagine how we can do this. Then, of course, after we secure approval from IBHE to teach courses, we then must apply and obtain approval from the DOE for financial aid disbursements. I am sure that all this can be done between now and January or February of next year, how about you?

The recent behavior of the school relative to its financial aid operations are instructive. In 2011, Watson and his administration took no responsibility for the scandal that occurred nearly two years into his presidency. They blamed the previous administration for all the difficulties. After that fiasco, you might think that the administration would conduct a thorough investigation of its financial aid practices, if only to avoid subsequent embarrassment. However, a look at the figure for unauthorized distributioin of financial aid reveal that of the $499,705 in non-approved disbursements, $312,919 (62.6 percent) took place under Watson. Not the kind of performance to inspire confidence. 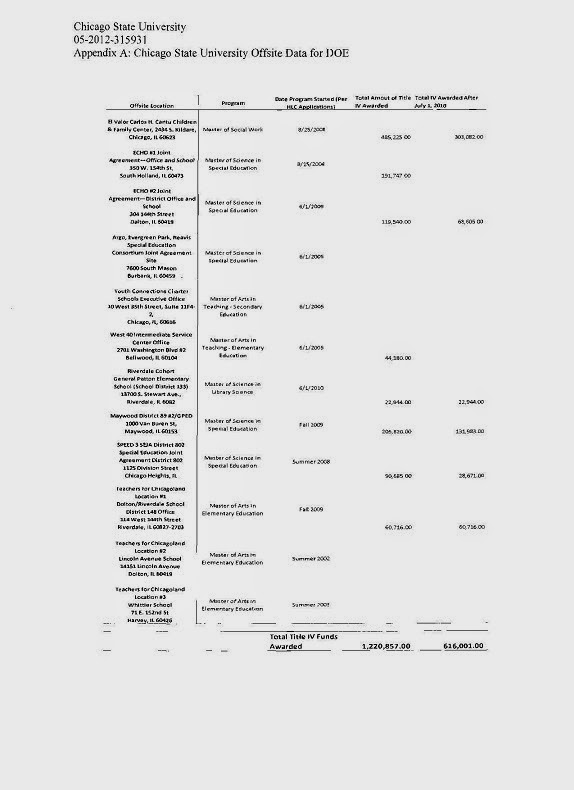 How long must we suffer this incompetence? The administrative failure to take the necessary steps to ensure compliance with the provisional requirements imposed on the university by the DOE will subject the school to possible termination of its ability to grant financial aid. How many students will we have then? How many students are going to register for courses on the west side if the school cannot provide them with financial assistance? Is this ridiculous new campus sideshow worth the damage it might inflict upon Chicago State? How many of you feel confident that our financial aid wizards will do correctly what is required to ensure the smooth operation of the new campus? Who in our administration even knows what they are doing or even what they are talking about?

Posted by Robert Bionaz at 7:46 AM