"You Know You're At CSU When..." continued

So loyal readers, another missive sent forth from the administration has reached the hands of several employees and created confusion, consternation and continued mistrust. To wit, the following. 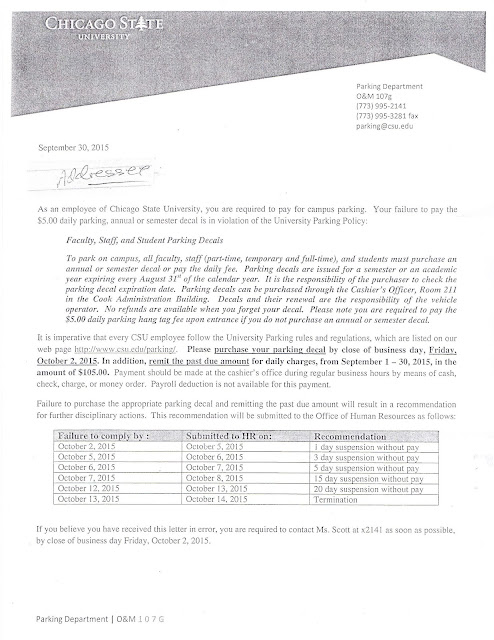 The Parking Department is now in the business of meting out discipline to employees who have failed to purchase a parking decal for the current academic year. Public bodies sometimes face what economists call a "free rider" problem when not everyone contributes to a good that everyone has access to. For example, public radio is available to anyone who has a radio, yet not everyone who listens contributes to cover the cost of that good. That is a "free rider" problem. At the university, parking is available to anyone with a car, truck or motorcycle. There is an expectation that those using that good will pay for it through the purchase of a parking decal. I, for one, am supportive of this policy to reduce the "free rider" problem associated with provision of a good. Parking decal fees should cover the cost of maintaining that good. There is a bit of a problem here though. This letter went to every employee who did not purchase a vehicle sticker. Yes, loyal readers, you guessed it. Not every employee either has a vehicle or uses that vehicle to come to work. Surprisingly some employees even use public transportation. (Perish the thought of being socially responsible.) Some employees don't own vehicles thus they wouldn't have purchased a parking decal.
The second glaring problem is that the parking department is not empowered to mete out discipline to employees. I would imagine the next step for the Parking Department would be conducting performance evaluations for university employees and reprimanding them if they aren't up to snuff. The University Professionals of Illinois Local 4100, the faculty and academic staff union, has provisions in its collective bargaining agreement that would be violated by this "policy." It also violates the principles of innocent until proven guilty and the protections afforded by due process. Because this communication involves personnel processes, I assume it would have been vetted by the Chief of Police, and the Office of Labor & Legal Affairs after being reviewed by the Human Resources department. Maybe it was. Regardless, the letter went out, reviewed or not and it is another example of CSU ineptness under the Watson regime.
The third problem with this letter is that it is not predicated on any data. Apparently the Parking Department used a list of university employees and cross-referenced it against decal purchasers to conclude that if the employee had not purchased a decal there was obviously misconduct in need of discipline necessary. I suspect that the creator of this policy is not aware of the process of eliminating alternative explanations. I know, that's something us academics do.
Fortunately the UPI Chapter President, responded quickly to this correspondence. 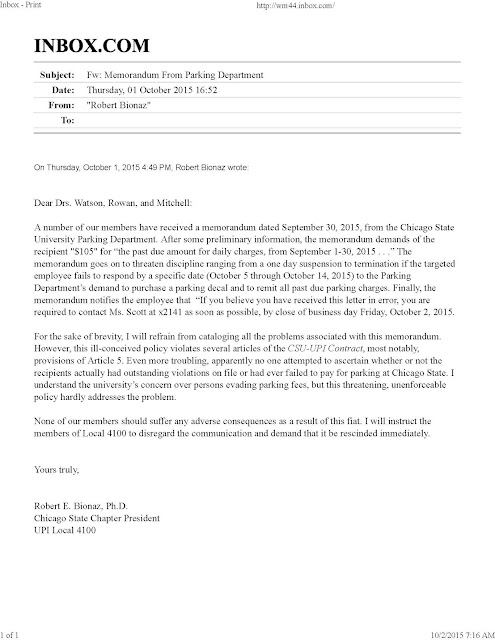 I am obviously sympathetic to the issue of the "free rider" problem faced by the Parking Department and this is another example of how problems go unsolved or exacerbated by the absence of shared governance at the institution. The Faculty Senate has a Buildings & Grounds committee that has parking as part of its portfolio. I am sure brief discussion with that committee would have yielded some viable alternatives. I am sure my faculty colleagues would have required that the Parking Department provide some data to contextualize the challenge though. I am sure that an email sent to me as the Faculty Senate President would have been a more helpful in resolving this issue. I am sure a phone call to the UPI Chapter President would have been a productive use of time to address the problem. This communication is further evidence of the collapse of this university. This administration has resolutely refused to constructively engage faculty since its arrival. Watson et.al. have considered their inane 'listening tours' faculty engagement and that behavior has led to this. And this quite frankly makes the university look like a yellow Volkswagen Beetle with 15 red nosed, big shoed, squirty flower wearing clowns piling out of it.
So where is the accountability from the Police Chief, the Parking Director, the Human Resources Director, and the General Counsel. When are these six figure administrators going to step up and say they dropped the ball on this. More importantly, when is Wayne Watson going to act like a president and accept his culpability for the continuing disaster that is Chicago State University.
Mercifully this failure is coming to an end with the exit of Watson et.al. Though that exit can't come soon enough.
Posted by Phillip Beverly at 10:00 AM