How Has Dennis Shields Performed at UW-Platteville? Here's One Measure: Enrollment

In an effort to provide the campus community as much information as possible about the three presidential finalists, we will present relevant data when it is available. Since Dennis Shields has served as the Chancellor of Wisconsin Platteville, it is possible to evaluate his performance in the same way we can evaluate Wayne Watson's failure. As we know, Watson bloviates but his "achievements" are virtually nil with the potential destruction of the university perhaps his most enduring legacy. Shields came to Platteville in 2010 so his tenure there closely mirrors Watson's tenure at Chicago State. 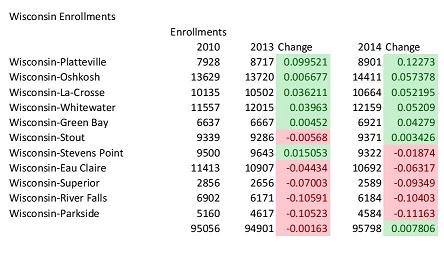 Posted by Robert Bionaz at 4:59 PM