Our Orwellian Administration and Its Data: A Prediction for Fall 2015 Enrollment

One of the most interesting things about the academy is how two persons can look at the same data and come to different conclusions, sometimes resulting in diametrically opposed interpretations. As I have mentioned previously, the university has to provide a yearly report to the Illinois State Legislature which I assume is immediately placed into a file cabinet somewhere, never to be seen again. I have not seen any other school’s “ISL Forms” but Chicago State’s are remarkable for their contradictory data, preposterous claims and sometimes outright lies. The 2016 version of our ISL Forms is no exception. It is chock-full of ridiculous assertions that would be laughable if the situation at our school were not so dire. As an example, Chicago State has to respond to questions about its viability, in particular about its enrollment. As the administration does in front of our feckless Board of Trustees, they spin the narrative in a way that actually insults one’s intelligence.

Predictably, the administration does not want to talk about enrollment. Therefore, it is necessary to perform a bait and switch maneuver that will enable them to discuss the one portion of the enrollment presentation that is actually increasing: the number of applications. As you can see from the highlighted portion of the memorandum below, the administration is quite positive about the increase in applications. Unfortunately, that increase in applications has done nothing to stop our continual enrollment losses (nine consecutive semesters and counting). Since August 2014, Chicago State has apparently participated in the “Common Application” program, described by one CSU administrator thus: “This effort will expand the reach of Chicago State University and provide a wider market of recruitment for students around the world. We will be the second institution in the state along with the University of Illinois at Chicago to use this application process. So we’re excited about those, that new outreach to prospective students.” I will return to this enrollment strategy later. Here are the two tables submitted to the legislature: 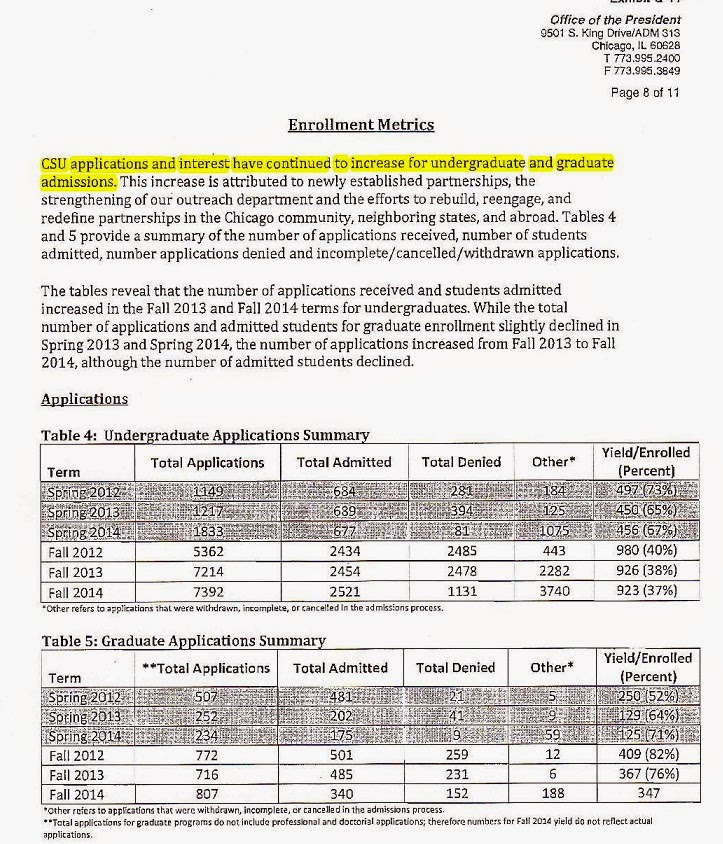 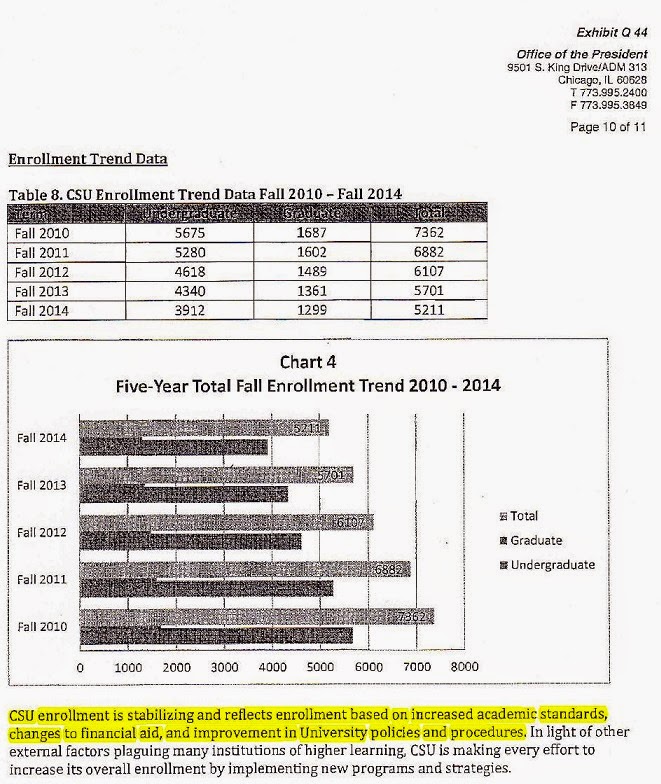 The administration cannot avoid a discussion of our enrollment however. In that context, they make the fantastic claim, repeated in front of our Board by Watson, that “enrollment is stabilizing.” This simple statement asks the reader to ignore the reality presented in the figures which demonstrate that enrollment has, in fact, decreased from 7362 in fall 2010 to 5211 in fall 2014 (4818 in spring 2015). I am not a mathematician or statistician, but it seems to me that the empirical data presented in that chart supports an argument that enrollment is declining rather than stabilizing. The enrollment and application data, combined with the administration’s interpretations about that data lead me to support a somewhat different conclusion as to what all this means. Here it is:

The administration presents the application data as evidence that its enrollment strategies are succeeding. However, an analysis of the figures provided by the administration shows clearly that while applications for fall enrollment increased, the actual number of students who enroll declined. That observation also holds true for graduate applications/enrollment for spring and fall semesters since spring 2012. For undergraduate spring enrollments, although the university experienced a slight increase in enrolled students from spring 2013 to spring 2014, overall, the number of undergraduates enrolled has declined since spring 2012. As we know, these enrollment figures have been insufficient to replace students leaving the university.

The “Yield/Enrolled” portion of the administration’s chart measures the proportion of students accepted by the university who subsequently enroll. Looking at the “yield” as a percentage of total applications paints a somewhat different picture of the administration’s efforts. Before discussing this, I ask readers to note the increase in the “other” category of the administration’s chart. The explosion of “withdrawn, incomplete, or cancelled” applications seems worth an explanation. None is forthcoming from the university. Yet, the percentage of those prospective students in the “other” category has increased from 8.3 percent in fall 2012 to 50.6 percent in fall 2014. For spring enrollments, the number of “other” applications increased from 16 percent in spring 2012 to 58.6 percent in spring 2014. What does this suggest? These students do not want to attend Chicago State. Here’s an anecdotal comment from someone in the administration: “It is a known fact that the the universities who belong to the common app system are well known universities with a low acceptance rate. . . Before students had no idea who CSU was, as I witnessed it first hand. . . They often confused us with UIC or University of Chicago. Once I explained that were not the schools they thought we were, they walked away. But since we now show a sign on our recruiting table that we are a member of the Common App, they rush over to fill out the student inquiry cards and walk away without asking any questions. All because they associate CSU with the well known institutions that belong to it. So they don't need to ask any questions, they assume that we are a thriving institution within in the ranks of top American institutions. Countless students have visited CSU solely because we are a member of the Common App. Upon Arriving at CSU, they changed their minds and decided not to attend. Per conversations I've had with them , ‘This is not what we expected from a Common App institution’ is a resonating statement.” Although they may apply for admission, “I know that they will change their mind(s). All of this is from talking with the students and parents of future students. But this is my two cents.” 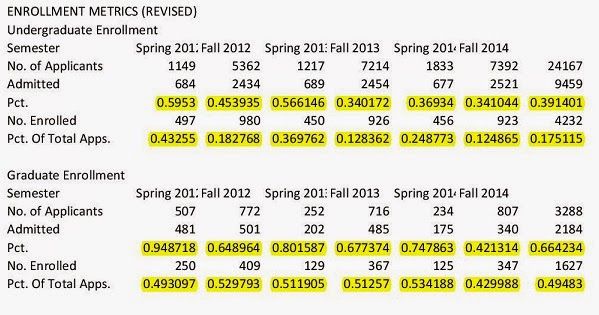 As far as the actual enrollment numbers are concerned, the administration is unable to modify those to fit its narrative of “stabilization.” However, note the way they present the information. In the chart with actual numbers, the years are arranged, top to bottom, in chronological order. In the bar graph below the numerical chart, the administration reverses the order. Someone taking only a cursory glance at the bar chart data might believe that the university’s enrollment has actually increased. Call me a cynic, but I do not believe the arrangement of that data coincidental.

So our administration is using a “smoke and mirrors” approach in its report to the Illinois State Legislature, who in any event, is unlikely to have any members interested in the goings-on at our modest little institution. None of this will surprise readers who have followed this blog for any length of time.

I would like to use some recent application data to hazard a prediction on our enrollment for the upcoming fall semester. If you do not care to read my analysis, here is my belief: our enrollment will drop again, possibly to around 4700. I fervently hope I am wrong, but here is the data: Our applications are actually up again (by 5 percent) to 5787, which the administration will undoubtedly report at the May 8 Board meeting. However, the number of undergraduate students actually admitted is way down, by 34 percent to just 1071 compared to 1627 at the same time a year ago. The figures for graduate students are worse. Although applications are up by 22 percent to 473, admits are down by 38 percent. At this point, 21 graduate students have been admitted, compared to 34 the prior year. Incomplete applications are currently almost 70 percent of the undergraduate total and over 58 percent of the graduate total. Overall, the current “yield” of admitted students is 18.5 percent for undergraduates and 4.4 percent for graduates.

Obviously, the enrollment management folks will work diligently to increase both the numbers and percentages of admitted students. Last year at this time, the “yield” figures for admitted students looked like this: 29.6 percent for undergraduates, 8.8 percent for graduates. Ultimately, the “yield” for actual enrollments reached 12.5 percent for undergraduates and 43 percent for graduates, so there will be considerable revision of these numbers. However, the percentages for fall 2015 are far below where the university stood a year ago. In fall 2014, total applications resulted in 34 percent acceptances for undergraduates, 42 percent for undergraduates. Using the changes between April 2014 and the beginning of the semester as a baseline, here is my prediction for fall 2015 enrollment: 4732. That number represents a 9.2 percent decrease from fall 2014 and will be the tenth consecutive semester of enrollment declines. Again, I hope I am proven wrong in this forecast, but given the performance of this administration, I am dubious about that prospect. In any event, this additional drop will simply enable this administration to again claim that Chicago State’s enrollment has “stabilized.”

The memorandum to the legislature contains the disturbing comment that Chicago State's graduation rate has decreased to 19 percent in 2014. While we all know that this percentage is based on a small percentage of our students, this decline reverses the rise to 21 percent touted by the Watson administration. While this is a discussion for another time, I think the graduation rate will decline further as the real effect of the Watson administration's various ineffective enrollment strategies become obvious. Finally, I have to note that once again, a document that should have been polished for public consumption contains at least one egregious error. At the bottom of the page on "Enrollment Metrics," the comment following the double asterisk mentions "doctorial" applications. That of course, is not a word in the English language.