So loyal readers, as we adjust to the new reality of 2017, I found myself reflecting on some issues that I had hoped would have been resolved in 2016 and also played the game of "I Predict" for 2017.

I was heartened to see that one of the unsightly gashes cutting through the campus had been filled and the concrete finished. I hope it has the time to set and cure before the temperature drops this weekend. I would hate to see it need repair within a few months of being laid. Alas, the other gaping canyon remains. In June, it will be two years that this has been in this condition. Rauner's Ravine stands as a testament to Illinois' political dysfunction and CSU's inability to maintain its physical plant.

What you see below, may look like ordinary office furniture but upon close inspection you will find that the chairs are covered in mold and mildew. Interestingly, they have been in this location and in this condition for several months. I would expect state property, not in use, to be disposed of according to property control regulations, especially if that property is a potential bio-hazard. 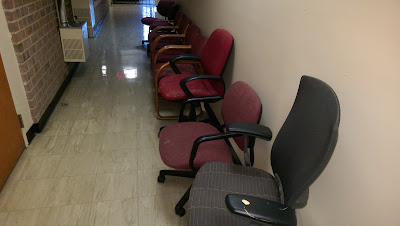 I have noticed that the daily enrollment reports have disappeared. What is the enrollment since the university has passed the 10 day mark. How many students down is the university in the 13th consecutive semester of enrollment decline? And how is it that those responsible for this decline are still employed by the university? The enrollment issue is the first issue the newly constituted board of trustees should address. That means that the enrollment infrastructure must be rebuilt, a plan for increasing enrollment developed and disseminated, and those hired to implement that plan be held accountable for its successful implementation. Unfortunately, the university has been burdened by administrators that either lack vision and/or the ability to execute. Sadly, Fall 2017 will likely be the 14th consecutive semester of enrollment decline. This will likely lead to further program and personnel reductions making the university less desirable to prospective students thus driving enrollment down further. I imagine that Fall of 2018 would be the earliest that the university could pull out of its long term enrollment decline.
And with all of that said, the good news of the week was the HLC whitewash that will occur surrounding the university's accreditation. I Predict that the university will remain the longest continuously accredited institution in the the state of Illinois. Monday's dog and pony show, sans evidence, was nothing more than university administrators cheerleading for the institution, rather than providing evidence of assertions made in the university's report. For example, during the last session, which lasted an hour, a single faculty member spoke. The conversation was dominated by administrators who seemed eager to convince the visitation team that all was well and the university has moved through its most recent adversity. The pleading was sad, given that anyone who has spent more than five minutes in the ghost town known as CSU, would know that the institution is completely on autopilot. Faculty, know what to do in their classes, but everything else is all but defunct. Rest assured loyal readers, that the HLC is complicit in this charade. The format of the visit screamed "Don't ask, don't tell." The visitation team wouldn't ask hard questions of constituency groups and members of those groups wouldn't be compelled to tell the truth about the level of dysfunction, which according to a psychologist friend of mine in private practice, is actually pathology and not dysfunction. So the open forum based format allowed administrators to dutifully perpetuate the Keep Calm, Keep Feigning Competence mantra of this administration. I hope that the new board chair, Paul Vallas, knows what he's in for in trying to manage a very broken institution.

The real good news is that now the Governor owns Chicago State University. He has appointed five of the current board members. If they can't fix this mess, it will be on the governor's watch.

Posted by Phillip Beverly at 7:44 PM