Here's What the Appellate Court Thinks of Our Former President and His Behavior: What Will Our Board Say About This? Hundreds of Thousands of Dollars Wasted

As Corday’s most recent post indicates, the Illinois Appellate Court has weighed in on the Crowley case. You remember the first verdict, a $2.5 million damage award against the University—specifically against the former President—plus back pay, front pay, and interest, which now has reportedly reached over $5 million.

You may also remember that the university appealed that original verdict after spending hundreds of thousands of dollars on the unsuccessful defense of the former president. Undoubtedly, the university has now spent more thousands of dollars on the appeal. The result: Two unanimous decisions utterly repudiating all defense claims, with the Appellate Court affirming in its entirety the award.

What follows are excerpts from the Appellate decision. If anyone wishes a copy of the entire opinion, it’s here: http://www.illinoiscourts.gov/Opinions/recent_appellate.asp.The Appellate Court shredded all of the defense arguments, many of which should have been brought up at trial and were not. As previously noted on this forum, appeals do not deal with issues of fact, those have been established during the trial. Thus, raising additional issues of fact during the appeals process is a waste of the court’s (and everyone else’s) time.

After batting away a number of specious claims raised by defense counsel, the Appellate Court takes up the issue of the amount of the award, assuredly the most important component of the appeal. Beginning on page 15 of the opinion, the opinion discusses whether punitive damages are permissible and whether the award was excessive. In the next ten pages, the court’s opinion eviscerates defense arguments, and affirms both the propriety and amount of the punitive damages. Along the way, the judges have a number of harsh things to say about the behavior of our former President and his “Lieutenants.”

On page 19, the court finds that Crowley’s actions “protected the public’s right to know of inappropriate activities in the expenditure of state funds at a state university.” The judges argue that punitive damages in the Crowley matter are no more inappropriate than using state resources to “improperly retaliate against a state employee” and to use even more state resources “in defense of such impropriety.” The judges then make clear that damage awards are “for the jury to decide,” based on its assessment of whether the “defendant’s conduct was willful and wanton.”

The court then deals with defense claims that the award violated their “due process” rights, a familiar all-purpose defense used by both the former President and members of his administration still employed at Chicago State. Here the standard includes “the reprehensibility of the defendant’s conduct,” the “most important factor,” which considers the “harm caused (physical or economic), whether the conduct shows reckless disregard for the health or safety of others . . . whether the harm resulted from malice, trickery or deceit.”

The opinion notes that defense lawyers “make virtually no argument that Watson’s actions did not rise to the level of willful and wanton conduct that could warrant the imposition of punitive damages.” The opinion goes on to say “This is congruent with our view of the evidence, which shows that Watson and his lieutenants were nothing short of reprehensible and that they acted with malice and deceit.” After detailing several ways Watson and his administrators tried to harm Crowley, personally and professionally, the judges write “In analyzing the due process violation, the evidence thus supports a conclusion that defendant’s conduct was thoroughly reprehensible.”

Moving to the amount of the damages, the judges write “a jury’s verdict for punitive damages should be found to be excessive only if it is evident that it resulted from passion, partiality or corruption.” In this case, the court finds “The only passion revealed in this trial was the ardor with which defendants sought to humiliate their improperly terminated employee.” Completely rejecting all defense arguments, the Appellate judges concur with the trial court judge’s belief that the size of the judgment should encourage taxpayers “to entrust the appropriate individuals with state resources and decision-making authority.” The judges obviously believe our former President is not one of those “appropriate individuals.”

I am sure the Board of Trustees will ignore the consequences of this decision and decide to throw more money away on the fruitless defense of the indefensible behavior exhibited by the former President. Perhaps the Board will decide that despite decisions by a trial jury and the Appellate Court, that our former President really did not receive due process. Perhaps they can confer upon him another “honor.” This needs to stop and the university should stop expending its meager resources on defending this behavior. This lawsuit is simply another millstone around the neck of our new President, another incident in the sorry narrative of our former administration, and another example of the fecklessness of those persons entrusted with the well-being of the institution. Below are excerpts from the opinion: 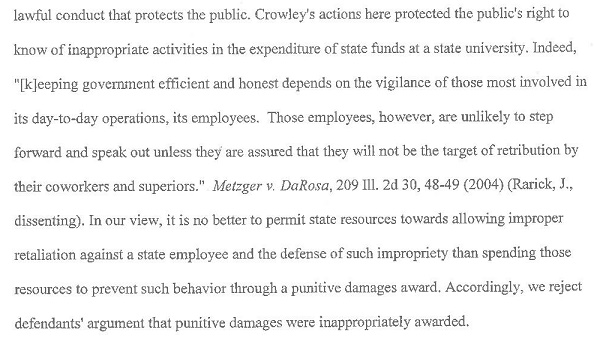 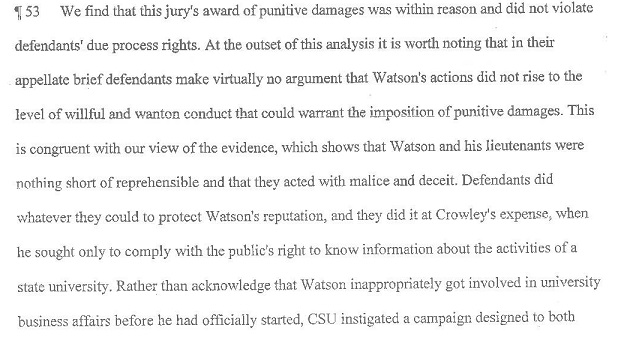 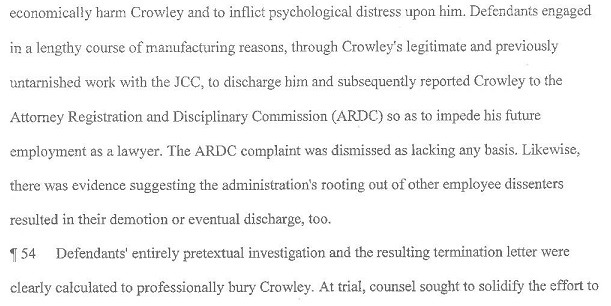 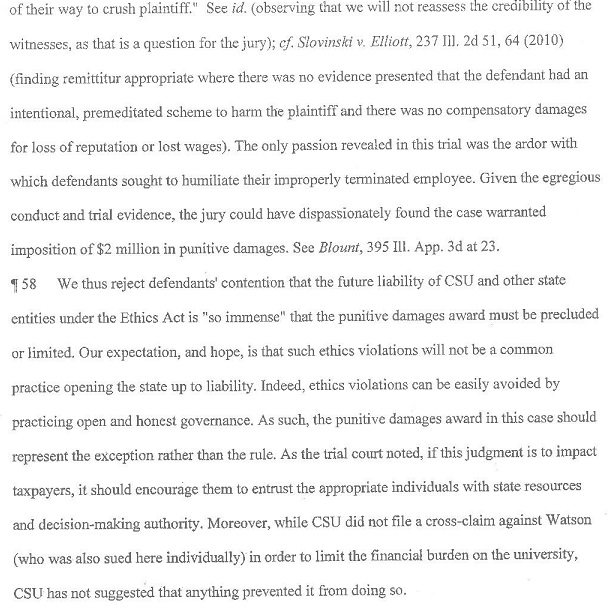