It's Business as Usual at Chicago State

It is hard to imagine how a situation calling for tact, delicacy, and consideration—something like sending 900 people layoff notices for example—could have been handled with less consideration for the unfortunate employees of Chicago State University. Yesterday’s layoff debacle does not auger well for the university’s future handling of this ongoing financial crisis.

Yesterday hewed to the administrative playbook of the former President: unwarranted secrecy, poor or non-existent communication with contradictory messages, and the inexcusable press conference before the affected employees had even been notified. The predictable result? An angry and confused work force at the university. Here’s my view of the chronological progression of yesterday’s events.

About 6:30am, Thursday morning, one of the television stations reported that Chicago State would be announcing layoffs later that day. Of course, I had heard nothing, either as the President of the University’s largest union, or as one of the employees affected by the layoffs. A few hours later, an article appeared on the University’s web site that began: “Chicago State University announced on Friday that all faculty, staff and administrators will receive a notice of potential layoffs in the event that the State of Illinois continues to fail to fund public universities.” Since anyone paying attention to the events of the past year knew, given the absence of state appropriations, staff reductions were a definite possibility. There was nothing in the press release about an effective date for the layoffs. Shortly after the press release went up on our web site, the Chicago Tribune reported on the layoffs. In the first iteration of the story, the Tribune indicated that no layoff dates had been announced.

During the day, I received phone calls and e-mails from faculty asking what the notices contained. Of course, I had to tell people I simply did not know, that I had neither seen nor heard anything official. Late in the afternoon, I began to hear that the letters received by staff and faculty were, in fact, quite specific. Here’s what they said: 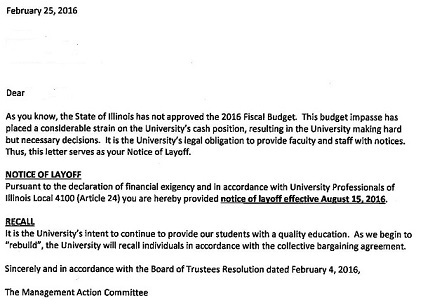 So, the university held a press conference prior to officially notifying any of its employees (I assume) that they would be laid off beginning either April 30 (the date as I understand it for staff and administrators, I do not know about our Lecturers), or August 15 for Unit A faculty. The university also apparently failed to provide specifics of its layoff decision to either readers of the web site, the media, or, of course, affected employees.

Make no mistake, this responsibility for this fiasco belongs at the feet of the university’s Board of Trustees, complicit in the previous administration’s excesses, and the driving force behind the declaration of “financial exigency” and the creators of the “Management Action Committee” and the “University Advisory Committee,” which includes leaders from various campus unions. That committee met the day before yesterday’s announcement and was told nothing.

We have just endured six long years of the kind of management shenanigans on display yesterday. The staff of this university deserves better treatment. We deserve to be told what administrative decisions have been made that will affect our futures and we deserve to be given that information before it is disseminated publicly.

Although we have a new President who deserves the opportunity to succeed, I believe yesterday’s fiasco underscored the consequences of the continued toxic presence of a Board and holdover members of a crony--riven administration that have literally brought this university to its knees.To be sure, dramatic cuts to this university’s bloated administrative positions and salaries must occur. Our first salary reductions should come from those high-salaried administrators who have done so much damage to this school.

Posted by Robert Bionaz at 3:00 PM