Another Thing We Now Know

So as previously reported here, the Board of Trustees declared financial exigency on Thursday. On the list of the worst things that can happen to a university, I rank financial exigency declarations at number 2 just behind, permanently closing the institution. It can be regarded as an indication of significant failure on the part of university’s president and governing body. The assumption is that the chief executive and the body with fiduciary responsibility for the institution were incapable of or derelict in performing their duties. The current situation presents a bit of twist. The current president has been operating in his capacity for 37 days and could hardly be held responsible for creating the conditions of the exigency. However, his predecessor is clearly culpable in his numerous documented failings, most glaringly his inability to raise substantial sums of money or create new or maintain current revenue streams. The full cost of the past presidency is to be computed at a later time. Suffice it to say, loyal readers of this humble blog will be familiar with the story of the university since March 2009. The Board minus two members is fully responsible as they had the opportunity in February 2013 to change the trajectory of the university. Instead of putting the institution first, they doubled down on failure and three years later CSU finds itself with the most capable president it has had in decades who now has his hands tied by external forces beyond his control exacerbated by internal forces who were obviously complicit in reaching this point.

I will speak to one of the external forces. Long time readers might recall a lengthy post from January 23rd, where I posited that it would be logistically impossible to close the university by March 1st or May 15th for that matter without it costing more than the appropriation voted on by the Illinois legislature that was vetoed by the Governor. That appropriation included a 6% budget cut which the university likely could have weathered without necessity of a financial exigency declaration. In that post I indicated that I didn’t know, but was concerned about the accreditation implications of this budget impasse. The question underlying the concern was answered definitively by the letter from the Higher Learning Commission posted below. 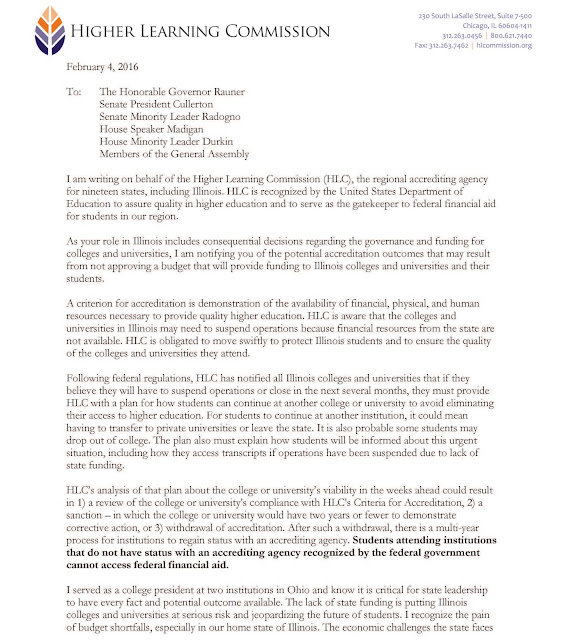 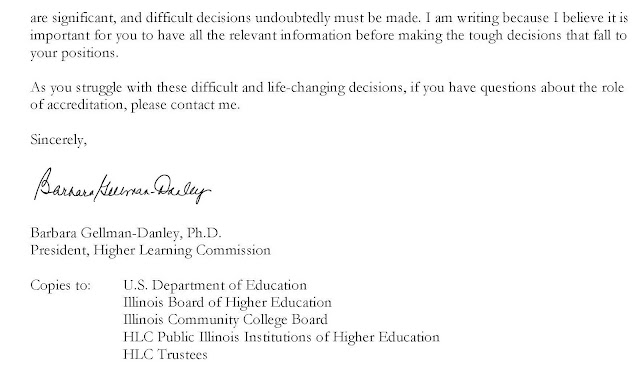 First a reminder about CSU and accreditation. Chicago State University is a fully accredited institution having received a ten year accreditation after the HLC visit in November 2012. CSU was NEVER at risk of losing its accreditation contrary to incorrect statements made by the former president reported in the press. With that said the HLC’s letter is very troubling as it affects all Illinois public institutions. This communication is not just about Chicago State. Though the University of Illinois has more of a cushion it can’t survive indefinitely without state appropriations. The HLC is very clear about the consequences of this continued deprivation of state funds. It has requested that all public universities submit a plan “that if they believe they will have to suspend operations or close in the next several months” what will they do to insure their students’ educational continuity.

The three options presented by HLC are reasonable.

I believe the President will submit a plan that results in Door #1 being opened. Doors #2 & 3 would only further damage the institution’s reputation at a time when it is poised to emerge from the wreckage of the past administration. The best thing at this point is for the President to be given the widest possible latitude with no interference from the Board that helped put the university in this situation in the first place. Ostensibly, the Board would always act in the best interest of the university. I believe its best interest now is to let the President do his job and salvage whatever is recoverable from the mess created by his predecessor.
Posted by Phillip Beverly at 4:54 PM