As we begin a new year, it seems a good time to reflect on where the university stands at the beginning of 2018. Simply put, it’s business as usual at Chicago State. The latest iteration of our administration is either unable or unwilling to make the changes necessary to take the school in a direction not headed for disaster. Whatever optimism that existed last April is gone and the staff and faculty have frankly given up on the current president to do much of anything. The most current enrollment figure for spring stands at just over 2500, with the drop session for non-validation still to come. It looks increasingly like our enrollment will be somewhere between 2500 and 2700, which is another drop of over 20 percent from the previous spring. Still, many of the senior administrators who have been in their positions throughout most of our enrollment decline retain their positions and continue to draw their nice salaries.

There is a new presidential search coming this year. The Board has selected another search firm to conduct this search, at the bargain basement price of $75,000. What will the search yield? At this point, no one knows, but whatever hope remains for the university to stem the exodus of students may depend on the Board’s choice of a new leader and the ability of that new president to operate independently to bring in people who are credible and who know what they are doing. Given our recent track record, this may be impossible to achieve.

Since December 2015, we have had 4 presidents of this university. In December 2015, we still had the fraud and political hack Wayne Watson. Then in January came Thomas Calhoun, who threatened the security of the Watson holdovers and whose administration was derailed even before it began by our senior administrators and Board members Nikki Zollar, Anthony Young, and Marshall Hatch, abetted by the vacuous, spineless Horace Smith, James Joyce, Spencer Leak, and Michael Curtin. After the disgraceful ouster of Calhoun, the board appointed Cecil Lucy, someone utterly unqualified to be president. With the appointment of four new Board members in January, the Board decided to replace Lucy with another interim president, Rachel Lindsey.

Whether the current Board is up to the challenge of finding an adequate president for this school may be determined by the applicant pool. Given the myriad problems facing this university, who would want to apply for this job? Obviously, the location is a plus, but will this be nothing more than another series of bad choices? You can be sure that Wayne Watson will be lobbying for his chosen candidate(s), none of whom will be qualified.

We just experienced six-plus years of crony hires and failed leadership. The academic side of the university is in tatters. The enrollment is bad enough, better than a 60 percent decline since 2010. The other results of the patronage hires can be seen in the numerous lawsuits, some resolved, some still in progress, that continue to cost the university hundreds of thousands of dollars.

As I have said previously, the full effect of the catastrophic Watson administration will be felt for years. Based on data I’ve been collecting for several years, there is another set of problems on the horizon. We now have a full set of first-time cohorts from the Watson years to analyze. As you would expect, the findings are alarming.

You may recall that about two years ago, the university quietly revealed that the graduation rate for its 2009 freshman cohort (graduating in Summer 2015 or earlier) was 11 percent. This represented a drop from 19.2 percent for the 2008 cohort, and 20.7 percent for the 2007 cohort. Between 2010 and 2015, the Watson minions set policy for admissions decisions.

Before embarking on this discussion, I admit that the figures I keep are not “official.” The university adjusts these cohorts from time to time, resulting in possible discrepancies in the figures. They are pretty close, however. I also know the way graduation rates are determined is unfair to transfer schools like Chicago State. Nonetheless, we’ve been getting beaten up over this issue for years and it seems like something to which someone might want to pay attention. When the 2015 graduation figure became public, a university spokesperson claimed the drop resulted from the university trying in 2011 to “preserve the academic integrity of the institution.” This assertion is nothing more than a bald-faced lie. Here’s what is coming in terms of our graduation rate.

So, here’s the Watson administration performance from 2009 through 2015: 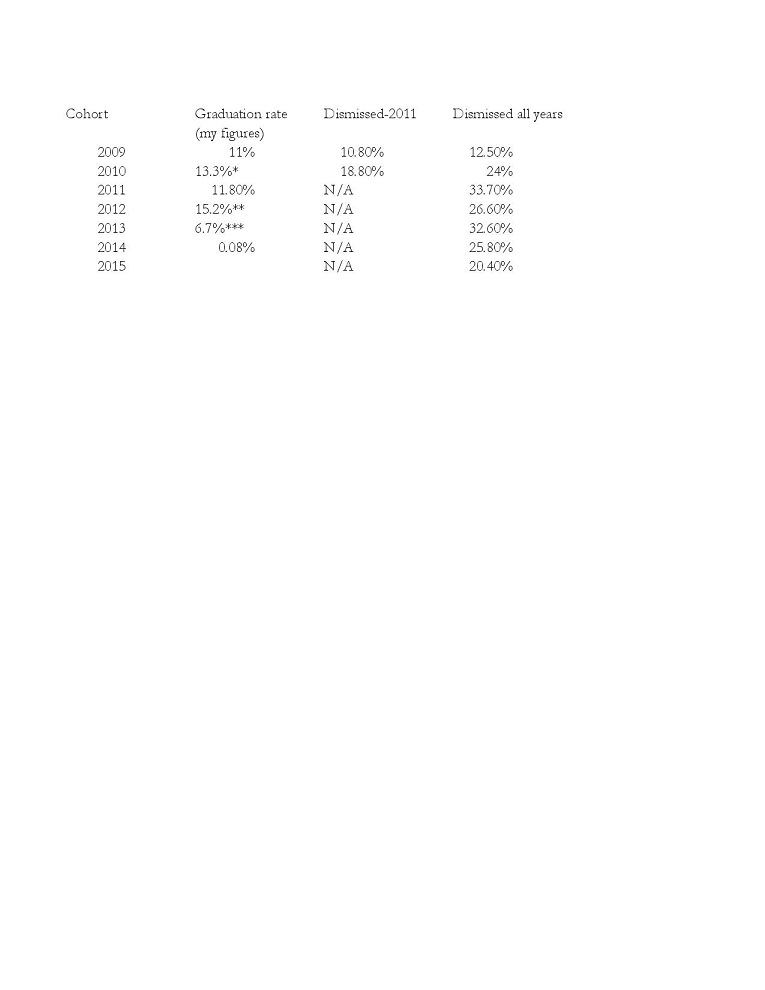 Overall, for the three years final statistics are available , the Watson graduation rate is 12.0% (my figures) or 12.7% (university reports). Compare that with the 22.2 percent of students between 2009 and 2011 who were dismissed for poor scholarship.

Based on this information, I feel able to make some predictions for future graduation rates. These are based on the data I have collected and are not “official.”

For 2013, a total of 23 students have registered for classes in spring 2018, with an additional 8 students attending in fall 2017 but not yet registered for spring 2018. If all these students register, that’s 13.8 percent of the cohort finishing their fifth year. Added to the 6.7 percent who have already graduated, the maximum graduation rate would be 20.5 percent. However, there is usually attrition of at least 50 percent between fifth and sixth year. Thus, if 6.9 percent of the current students actually finish within six years, the graduation rate for 2013 will be around 13.5 percent.

For 2015, there are also 45 students registered for classes in spring 2018, with 11 attending in fall 2017 but not yet registered. If one-half of these students graduate on time, the 2015 cohort’s graduation rate will be around 17 percent.

Based on nothing more than my belief that the completion rate is too generous, I will adjust the figures downward. Here is what I think Watson’s performance will look like when we end 2021:

Students admitted during the Watson administration have roughly twice the statistical probability of being dismissed for poor scholarship as they have to graduate. Quite a performance by Watson, his host of cronies, and lots of City College retreads. This is why the Board cannot settle for another fraudulent political creature at the head of what will be left of this academic enterprise. Can they do it?

Posted by Robert Bionaz at 1:42 PM