The New Administrative Narrative: "We saved CSU from closure." Yeah, but you were also the ones who broke it in the first place.


We were treated to another memo from Mr Lucy, Interim President, yesterday. The new p.r. policy of informing what remains of the CSU faculty and staff of a potential news article from the media hounds is clearly in place.

Yet the mantra we keep hearing that Mr Lucy expresses below is that the media only publish negative stories about CSU. It sounds awfully like the critique we are hearing on a national level from you-know-who in Trump Tower. "We have great stories to tell, stories the media refuse to cover because it [sic] doesn't sell papers or increase ratings." Well, duh.

Tell me, Mr Lucy, do you think it is the "media's" job to report that some professor at CSU got a grant or that some student got a high gpa or that some administrator went to a conference? I do not see that kind of boosterism from the local Chicago papers for any other universities in Chicago. Why haven't the highly paid bright young things that your ex-boss hired been able to make the kinds of connections with the media to plant the right stories about us in the press? From what I see universities get "good" press when something is a big deal--nobel prize winning at U of C, new business school at Northwestern, that sort of thing. You weren't here to remember how Wayne Watson's CSU was allowed to fly under the press's radar while U of I was going through a big scandal regarding its Board of Trustees. A few years back U of C was all over the local newspapers for its own presidential shenanigans including a somewhat scandalous divorce.

So stop bleating about the negative media coverage. We are a public institution and must be held accountable to the taxpayers of the state for our failings. One way that is done is by shining a light through a free press. I realize that for decades the principle of accountability is something CSU has chosen to ignore or skirt around. I and others have said this to you administrators and trustees before, if you don't want negative publicity stop doing things that generate it. If you want faculty to stop airing your dirty laundry, stop dirtying up so much laundry.

If CSU had been bound by rules that other universities follow (i.e. standards set by the American Governing Boards or the AAUP) instead of being bound up in the crony-ridden politics of Illinois, if CSU had been subject to proper vetting and scrutiny, checks and balances by state agencies and accrediting agencies in place to do that, we would not be scrambling pathetically to keep body and soul together now in this winter of our discontent.

You can say that you saved CSU from closure, but the same people who truly wrecked CSU and brought it to its knees are the ones who are still in power. Firing staff, firing lower level administrators, firing tenured and tenure-track faculty is nothing to boast about to us. What high-level Watson crony hire has lost their job in the saving of CSU bloodbath? No sacrifices there. And it's interesting how students come first when the administration is backed up to the wall. Be honest--did you really save CSU for the students or are you clutching at it like a golden goose for the cronies and their patrons who ran it into the ground? 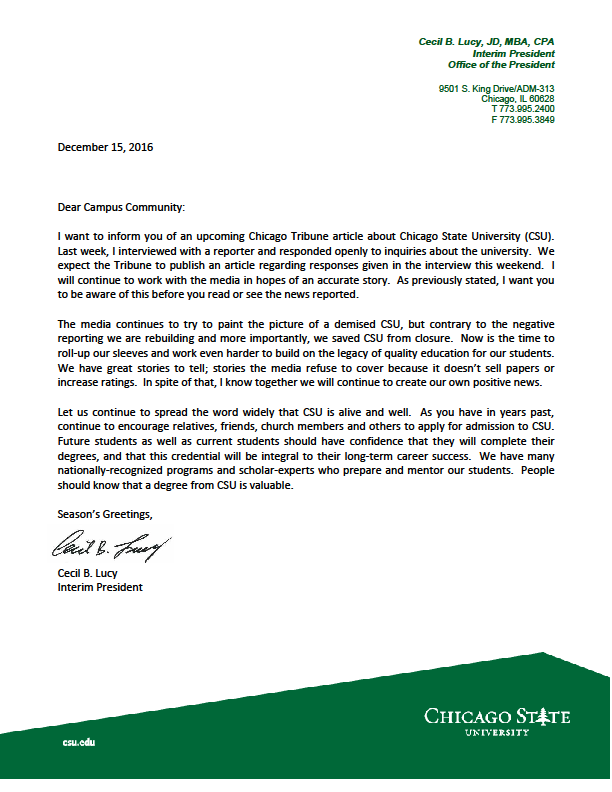