Twelve Questions To Begin the Semester

So as the Fall 2015 semester begins, I, like my students, am full of questions. If any of you, loyal readers have answers please feel free to share those here or by email at csufacultyvoice@gmail.com.

My first question involves the photo below. I have decided to call it Rauner's Ravine as the Governor is responsible for the work stoppage that you see here. The question is whether Rauner's Ravine will be filled in before the first snowfall. Fortunately, it hasn't been a wet summer because standing water could breed mosquitoes, which increases the risk of West Nile virus. Additionally, I would imagine water could damage the equipment buried underground. Anyone want to start a pool on how long this will remain??? 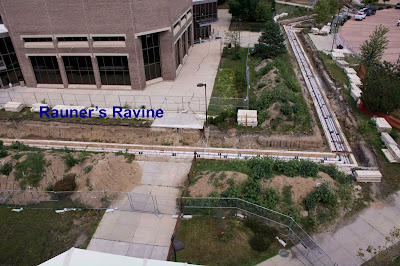 The second question of the semester is who occupies this office suite? It was previously the office for the Director of Admissions, but I guess we don't need someone who has admissions experience in that job. So now this office suite is occupied by none other than Cheri Sidney. Who knew that a $113,000 job got you an office suite with no other occupants. It only goes to show that the tag line of the university really is "Only at CSU." 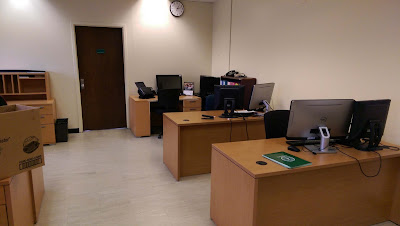 And speaking of admissions, there has been a significant drop in graduate admissions, probably due to the firing of Kim Kelly, a long serving employee in the Admissions office. Apparently there is a fairly large stack of graduate applications which are not being processed because the person who would process them is no longer there and has not been replaced. It begs the question whether the administration actually wants a functional university or do they just want to play at it like a child's game.

The question on the minds of many long suffering staff and faculty is the enrollment. Will the university break the 5,000 student barrier or will this be ten consecutive semesters of enrollment decline under this administration? We should know at the ten day count unless of course the data would be too damning and instead of being released it's hidden.

My fifth question is related to the previous question. With great fanfare the administration declared in the spring semester that there wouldn't be a special session in fall to boost their numbers. Now there is rumbling that after administrative incompetence there will be a poorly planned special session so that the enrollment numbers aren't so dismal.

A question on the minds of many staff is when will the next layoffs take place. Is it possible that the university can begin a semester and possibly get to the mid term without staff having to fear they are going to be laid off?

A colleague asked yesterday whether an article published in the Chicago Crusader, a local newspaper, was actually true. The Crusader reported that the president of the university has actually left the university. That begs the question of whether this is poor journalism or did the president not get the memo that time's up. It is time to go. If it were in fact true, then maybe the university community would have a better idea when this madness is going to be over.

The eighth question in our countdown of questions is the status of the much bally hooed transparent presidential search. Me thinks that the claims of transparency were a bit overblown. After a simple inquiry on how the search was progressing I was told by a committee member that they couldn't talk about the search process. Everything was a secret. So much for transparency. If any one knows how the search is going feel free to comment. As a courtesy it would be inappropriate to mention names of applicants, interviewees, or finalists before the Board announces them. This assumes the Board will ever announce them. I am curious whether there are any local applicants that have made it to the finalist stage. If so, that would obviate the need for a search firm as that applicant is on the university's doorstep. And if they are that close, it's obvious that political machinations are present, like elected officials interceding on behalf of an applicant. This is Illinois after all and we all know how the university was saddled with the current office holder.

For those who don't know the purpose of a university, allow me this brief primer. Universities exist to offer courses to students and conduct research. If a university offers few and fewer courses over time, it is facing some existential threat. To wit, how did the regime manage to cut 355 courses this semester? What sort of rational process was used? I'm compelled to ask because looking at some of the pre-cut data I have no idea how courses were eliminated. Is there a process or is there a dart board, or are courses drawn out of hat. Might a better process emerge if it were observed by officers of the shared governance bodies on campus, namely the union and the faculty senate?

This next question relates primarily to me but it also impacts you loyal readers. Much of what is reported here is discovered through Freedom of Information Act (FOIA) requests. The Illinois FOIA law is clear about reporting requirements, yet the university has not responded in the time prescribed by statute for the past several requests I have submitted. There refusal to comply with a state law impedes my ability to inform you loyal readers of the activities of this administration. Thus the question whether the university will respond to any of my FOIA requests this year.

And as improvements go, my eleventh question is whether there will be any improvement in personnel activities by the administration. For example, will probationary faculty receive notice of the decision on their action by the time specified in the union contract? Will faculty portfolios be returned in a timely manner? Will chair elections be conducted and chairs selected after the elections and not before? Will contracts for adjunct faculty be signed by the Provost in time for faculty to be paid before the middle of the semester? Will override paperwork be processed so faculty can be paid within the time specified by state law? I know loyal readers you find yourselves in disbelief that there would be such a gross dereliction of professional responsibility in the affairs of faculty at a university. I too am shocked by the impressive display of incompetence by the Provost and President. Well not really surprised. More surprised that faculty haven't revolted yet.

I believe that the only constant is change and things are changing here at CSU. The last question is where did they all go. The "they" that I am referring to are TRIO program, the HIV-AIDS Policy Institute and the Ghana grant. Each of these programs was funded in part by federal grant money and for some inexplicable reason they are all now defunct. The shuttering of the TRIO program is particularly disturbing given that CSU historically has served a significant number of first generation students over the past four decades. To not have the services that this program provides disadvantages the most vulnerable of the student population. It is my fervent wish that federal officials inquire into these program's demise.
Those are my twelve questions. If you have more, ask.

Posted by Phillip Beverly at 6:19 PM