Lies: and the Lying Liars Who Tell Them (Al Franken Title, 2004): The Basis for Chicago State's Administration

As chronicled on the pages of this blog, the crony-infested administration of Chicago State University has done incalculable damage to the school. The persons responsible for oversight of this wretched gang of incompetents do nothing but mouth platitudes about believing in Wayne Watson’s “vision,” while enrollment plummets and Watson and his gang shred the school’s academic reputation. In Springfield, the governor does nothing at all about the situation at Chicago State, in marked contrast to his past muscular intervention into the affairs of the University of Illinois.

Given the dire condition of the university today, one might wonder how Watson and his minions do it. How do they retain their power? One answer might be simple politics. Over a sycophantic three-plus decade career as a second-rate Chicago political hack, Watson has generated enough political support to enable him to damage not one, but two institutions of higher learning. That kind of political support, evident in March 2013 clearly enabled Watson to avoid a well-earned dismissal.

Just as the March 2013 political circus was more style than substance, the Watson administration’s “brand” is built upon a foundation of distortions, elisions, omissions and downright falsehoods. His supporters and stooges spin a narrative of competence that bears no close inspection. Contributors to this forum have successfully endeavored to expose to the light some of the most egregious practices of the Watson cabal. That these exposures have spurred no one to make the hard decisions about the school’s leadership does not mean that our efforts will cease. In this post, I will discuss the most glaring examples of administrative perfidy.

Beginning with the university’s website, distortions and lies are standard administrative rhetorical fare. Napoleon Moses, gone from the university since May 2013, appeared as the “Chief of Staff” until at least March or April of this year. Renee Mitchell holds no Ph.D. as the website claims. Instead, she received a Doctor of Management from the University of Phoenix. Angela Henderson’s recently abbreviated biographical sketch contains the ridiculous assertion (twice) that “Prior to joining CSU, Dr. Henderson served as Provost, Dean, Department Chair and tenured Professor at various institutions of higher education.” The disinformation on the website gives the impression of a real university administration. Instead, the résumés of key personnel are misrepresented and another administrator whose employment ended fourteen months ago continued to appear as a key administrative employee long after his separation from the university.

The distortions evident on the school’s website are mirrored by the somewhat predictable and repetitive public pronouncements from various university spokespersons. In the 2010 James Crowley lawsuit against Wayne Watson and Chicago State, Patrick Cage called Crowley’s allegations “unfounded,” and the lawsuit “meritless.” Translation: Crowley was lying. In its response to Glenn Meeks 2014 complaint against the university and Wayne Watson, Tom Wogan called the allegations “baseless . . . Mr. Meeks is clearly a disgruntled former employee . . .” Translation: Meeks was lying. Another lawsuit was filed against Wayne Watson and other university officials by Willie Preston and Brittany Bailey in 2014, Wogan called their allegations “categorically untrue.” While the Crowley case resulted in a $3 million judgement against Wayne Watson and Chicago State, the other two suits are currently in litigation. Clearly the Cook County jury that decided the Crowley case found it fairly easy to determine where the truth lay.

Recently, more subtle distortions appeared in a Chicago Sun-Times article on Angela Henderson’s lawsuit against UIC. According to the report, “The lawsuit alleges UIC has for months refused to address findings that iThenticate, the software program UIC officials told media the school used to detect potential plagiarism in Henderson’s case, has shown at least five other UIC nursing dissertations with higher plagiarism index scores than hers, and at least 30 other UIC dissertations with high or problematic plagiarism scores.” So, the lawsuit argues that in nursing everyone cheats, therefore Henderson’s plagiarism is all right? As for the total number of dissertations, the lawsuit neglects to mention how many plagiarism index scores exceeded Henderson’s, a somewhat important omission. Although figures for 2013 seem unavailable, UIC granted a total of 342 research doctorates in 2012 and 326 in 2011. The lawsuit neglected to point out that Henderson’s plagiarism score stood higher than at least 91 percent of the doctoral recipients in 2012 and 2011.

The story’s next paragraph is a masterpiece of deception. I am not sure whether the quoted material comes from the complaint or from the reporter’s own research. Given its position in the article, it seems fair to assume it is from the complaint.

"A blog maintained by iThenticate and Plagiarism Today, analyzing high profile news stories of plagiarism said of Bionaz’ allegations in January: 'CSU is clearly an embattled school ... shows how deep the divide is between some in the faculty and administration ... as serious as it is, the actual question of plagiarism is almost a sideshow. The real issue is the divide that clearly exists.' ” This passage seems designed to create the impression that Henderson’s plagiarism problems stem from my revelations of her dishonesty since the plagiarism is nothing more than a “sideshow.”

A look at the blog post from which this quote emanates reveals that the context for that discussion is quite different. Here is the entire post: 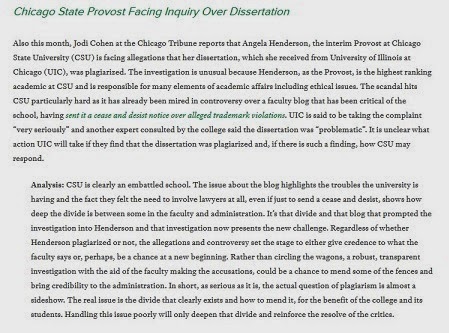 Someone obviously shaped the Sun Times material to suit the needs of Henderson, plaintiff and victim.

The inflated credentials of key administrators and the omissions, elisions and distortions in the Henderson plagiarism case go hand-in-hand with the inflated and dishonest applications/ résumés of particular Watson favorites to create a false picture of the crony-riven administrative personnel at Chicago State. Watson’s endorsement of the lies and misrepresentations of administrative credentials contributes to an atmosphere of basic administrative dishonesty that also manifests itself in the kinds of budget nonsense that enables Watson to hire six-figure administrators without even the pretense of a search, to intrude into personnel and departmental matters for which he possesses no expertise—and as recent discoveries have demonstrated—to place the university’s ability to distribute financial aid in jeopardy.

My distinguished colleague Dr. Beverly is currently in the process of serializing the revelations surrounding Chicago State’s continuing financial aid problems. While he will provide specifics, in general terms, the crisis comes about because of administrative incompetence and inattention. Currently, Chicago State is provisionally able to award financial aid through December 31, 2015. Any subsequent missteps might result in sanctions that would effectively render the university inoperative. This is the price of incompetence and cronyism and we will continue to expose the administration’s various failings as information becomes available. We could use the help of anyone at Chicago State: students, staff, faculty and administrators.

The Sun-Times story and ithenticate blog are available here:

Posted by Robert Bionaz at 5:23 AM