Chicago State Board to CSU Faculty: If You Don't Support Wayne Watson, You Can Just Go to Hell

As regular readers of this blog know, we have been engaged in a lengthy effort to find someone who would listen to our concerns about Wayne Watson’s leadership at Chicago State University. We have gathered a mountain of evidence that supports our conclusion that his administration is a failure: enrollment numbers, fundraising, fiscal responsibility and compliance, the university’s public image and the university’s academic image suffer because of this administration’s basic incompetence and particularly its inattention to detail. We have found irrefutable evidence of the dishonesty of several of our management staff, including the shocking plagiarism evident in Angela Henderson’s doctoral dissertation. We have found evidence of budget manipulations that regularly occur which foster the explosive growth of our administrative staff.

On several occasions, colleagues have remarked that they were troubled by the “tone” of our criticisms, or that they wondered why we were not taking our concerns directly to the president. First, I consider the objection about “tone” to be basically specious. Second, we have spoken to the president and other upper-level administrators several times. Those discussions have had no effect on the behavior of the administration, which I would argue has become even more egregious in the past year.

The body most responsible for the current state of affairs at Chicago State is the university’s Board of Trustees. Following the aborted attempt to remove Watson in March 2013, Governor Quinn removed the board members who seemed poised to take the university in a different direction and replaced them with three members who have proven to be reliably loyal to the president. The current board has consistently supported Watson and his “vision” and has taken no steps to protect the institution’s academic integrity. This board has ignored the substantive problems facing the school and sits idly by while Watson and his administrators mouth clichés and platitudes as enrollment plummets and threatens the school’s continued existence.

As many of you are aware, neither the staff nor the faculty at Chicago State have direct access to the Board of Trustees. Although the Faculty Senate president often reports to the board, there is no regular communication between the board and university staff and/or faculty. Given the difficulties inherent in speaking directly with board members, Phil and I recently made a back channel attempt to restate the case for Watson’s dismissal to the members of the board. We made this attempt based on information supplied by persons with personal connections to board members. Here is a summary of what they told us:

Wayne Watson has basically misled the board about the conditions at Chicago State. He has made the assertion that the opposition to his leadership stems from a few faculty who are attempting to assist “white” legislators and politicians in taking the school away from the Chicago African American community. Watson’s untruths included the claim that the plagiarism charges against Angela Henderson were nothing more than “allegations,” that UIC would decide if she had actually plagiarized her dissertation. Additionally, Watson had not informed the board members of a recent audit report from the U.S. Department of Education which was scathingly critical of the administration’s financial aid compliance. Finally, the current board members claim to be unaware of some of the statistical information we have posted on this blog for months. I was asked to send documentary evidence in a variety of areas and I did so.

The documents we sent supposedly opened the board’s eyes. They now understood that Watson had not told them the truth about Angela Henderson’s dissertation and we were told that at least one board member was really angry with Watson. This board member, apparently convinced that Watson should be removed, would make that argument to the other board members, at least two of whom were already leaning toward Watson’s removal. Ostensibly, this matter would be discussed in the executive session at the regular board meeting on June 27. While neither Phil nor I believed that this would occur, we saw no disadvantage in providing this material. A few days later, we sent the following letter to each member of the board: 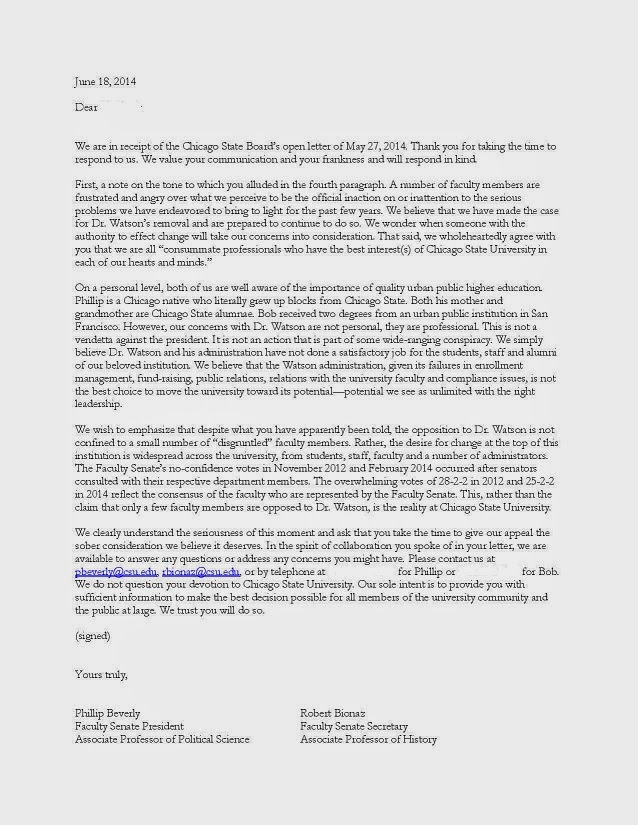 Of course, during the board meeting on June 27, nothing at all happened regarding Wayne Watson’s continued tenure as Chicago State’s president. Although the executive session of the board lasted 3 ½ hours, reports we received indicated that it was primarily devoted to a discussion of another administrator, someone who was recently terminated from her position.

However, on that date the board of trustees drafted a letter to both of us which in essence told us to go to hell. I will refrain from making any editorial comment at this point and will simply present the letter here: 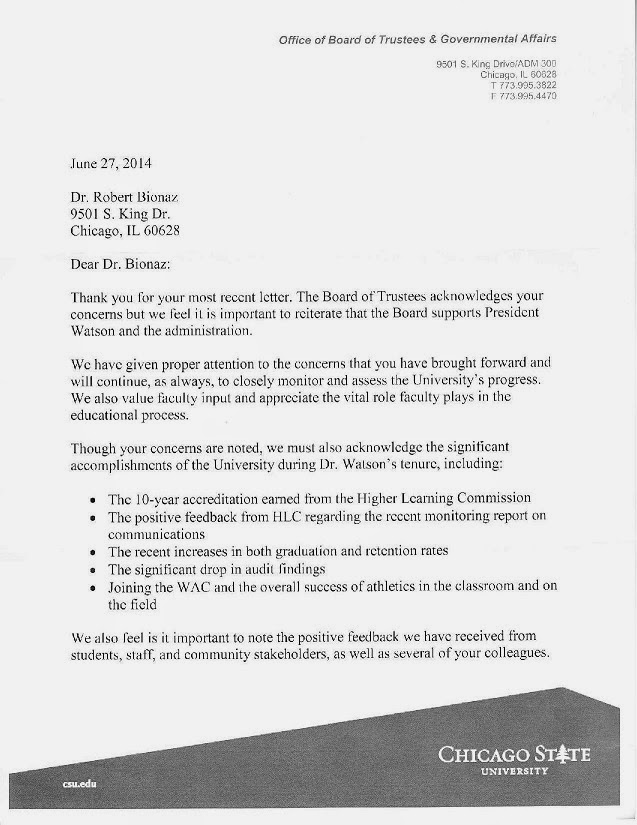 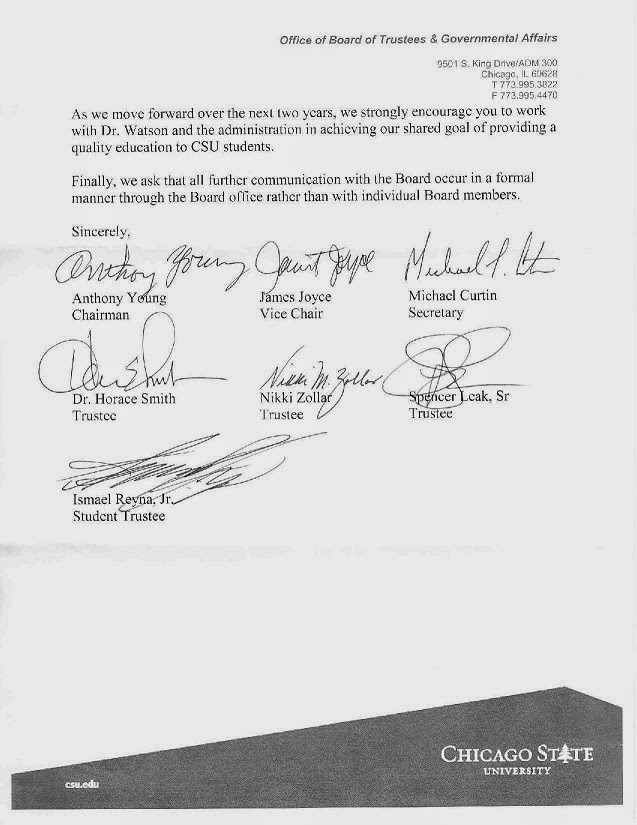 Clearly, the Chicago State Board does not want to hear any more from the faculty on this matter.

Posted by Robert Bionaz at 6:44 AM