A Tale of Two Universities

There’s a dramatic difference in the way leadership qualities are defined at Chicago State and the way leadership qualities are defined at a real university. Foremost, at a real university, there is some concern by the board for the students as well as for the university’s reputation. Leaders there, although they may perform poorly, are at least qualified to lead such institutions. In contrast, the criterion most valued at Chicago State seems to be political alliances. Any political hack can lead this university as long as he or she pays obeisance to the persons pulling the strings: the local politicians who are responsible for putting that person into power.

A comparison between the leadership situation here and previous leadership crises at the University of Illinois seems instructive. Here, no matter what the evidence, no matter what the scandal, no matter what the damage to the university, our ridiculous board stands behind Wayne Watson. As far as our board is concerned, no failure rises to the level of incompetence, no outrage against academic integrity is sufficient to warrant board intervention, no scandal smells bad enough to root out the cause. Wayne Watson could perpetrate any outrage and it would simply be insufficient to move this sclerotic bunch of trustees to action.

Let us contrast this situation with the circumstances of the last two leadership changes at the University of Illinois. In May 2009, the Chicago Tribune reported on the “clout” scandal in which persons were given preferential treatment for admission based on their political connections. That scandal even roused our governor from his typical torpor. B. Joseph White resigned as university president in September 2009.

In May 2010, Michael J. Hogan replaced White. In January-February 2012, White’s management style angered the faculty at the University of Illinois. About 130 faculty (about 4 percent of the total) subsequently wrote a letter to the Illinois Board of Trustees informing them of their lack of confidence in Hogan’s leadership and asking for his resignation. In response (see if any of what follows seems familiar) the Board Chair said “[board members] continue to support (Hogan's) efforts” and said the faculty concerns are “peripheral to the core values that we think a strong president brings.” A university spokesperson pointed out that the university system employed “more than 3,000 faculty” and proclaimed “We all recognize that it is a distraction and takes the focus away from a lot of the good things that are taking place” . . . “If everybody can just turn down the volume and heat on the rhetoric and agree to do a better job of communicating and working on the tasks at hand, everything will get back to normal.” Sounds sort of like the contempt for faculty and the mindless support by our board for Wayne Watson, no? Quotes from Chicago Tribune article "130 top scholars call for U. of I. president's ouster," by Jodi S. Cohen, Feburary 29, 2012.

Here is the letter Illinois faculty sent to the board: 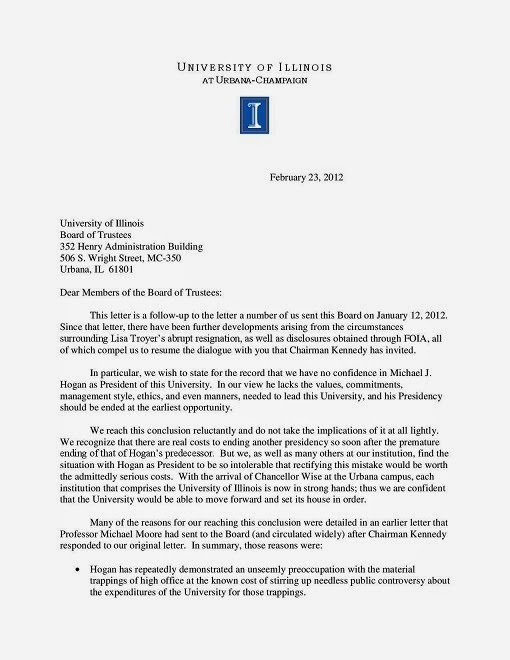 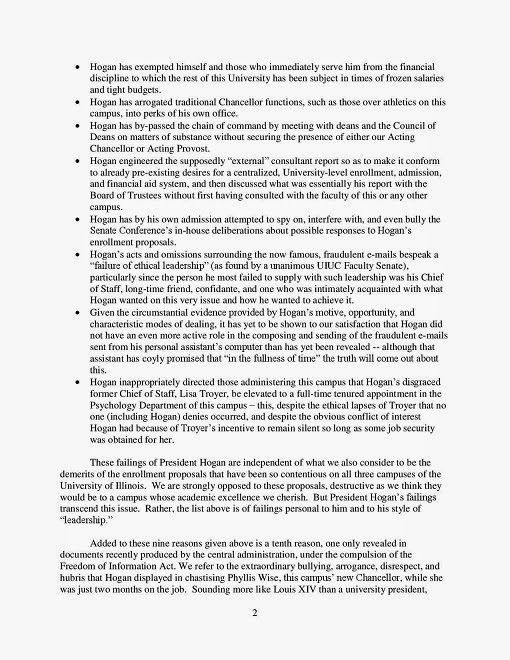 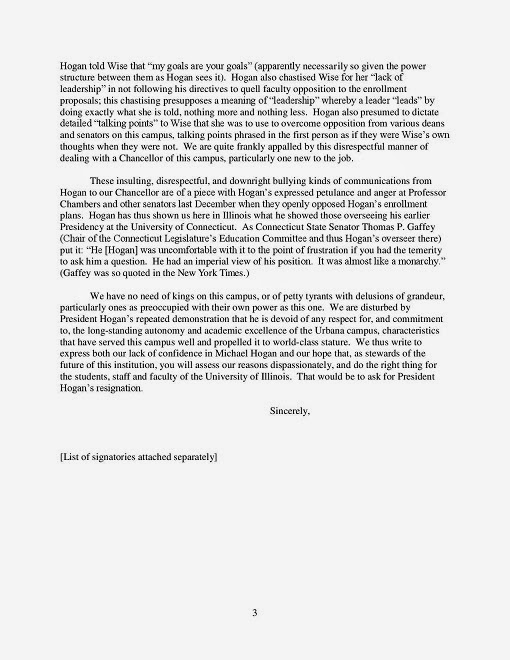 If you did not take the time to read the letter, here are some of its highlights:

“we wish to state for the record that we have no confidence in Michael J. Hogan as President of this University. In our view he lacks the values, commitments, management style, ethics, and even manners, needed to lead this University, and his Presidency should be ended at the earliest opportunity.”

“We have no need of kings on this campus, or of petty tyrants with delusions of grandeur, particularly ones as preoccupied with their own power as this one.”

“We are disturbed by President Hogan’s repeated demonstration that he is devoid of any respect for, and commitment to, the long-standing autonomy and academic excellence of the Urbana campus”

“We thus write to express both our lack of confidence in Michael Hogan and our hope that, as stewards of the future of this institution, you will assess our reasons dispassionately, and do the right thing for the students, staff and faculty of the University of Illinois. That would be to ask for President Hogan’s resignation.”

The letter details nine reasons in support of the faculty demand for Hogan’s resignation. They include: 1) Hogan’s propensity to ignore for “those who immediately serve him” financial constraints other university personnel have to deal with (sort of like Watson’s habit of giving positions and raises to his friends); 2) Hogan’s abuse of power by “arrogat[ing] traditional Chancellor functions” and his failure to conform to established channels by failing to include relevant administrative personnel in important decisions (similar to Watson’s incursions into faculty hiring and his unilateral edicts sans discussion with relevant university administrators or faculty); 3) the Hogan administration allegedly doctored an official report to “make it conform to already pre-existing desires for a centralized, University-level enrollment, admission, and financial aid system, and then discussed what was essentially his report with the Board of Trustees without first having consulted with the faculty of this or any other campus.” (similar to anything sent by this administration to the HLC); 4) “Hogan has by his own admission attempted to spy on, interfere with, and even bully the Senate Conference’s in-house deliberations about possible responses to Hogan’s enrollment proposals.” (here, the Watson administration has gone a step farther, threatening to disband the Faculty Senate)

Obviously, the University of Illinois has none of the other problems that plague Chicago State. Although the board and administration responses to the Illinois faculty’s complaints were derision and dismissal, the ultimate result was Hogan’s resignation as president, effective June 30, 2012. It is impossible to imagine the board at Chicago State taking any kind of similar action. Obviously, the University of Illinois Board of Trustees is capable of transcending the rhetoric of its chair to focus on the well-being of the institution. Our board is not capable of that kind of independent decision making. Of course, no one in power in this state really gives a damn about Chicago State University.