When Do We Find Out About the New Provost? Will it be our Plagiarizer in Chief?

Since the information about Angela Henderson’s plagiarized doctoral dissertation surfaced in January, Wayne Watson and the Chicago State administration have been basically silent on the matter (save for accusing Watson’s opposition of doing “everything they can to undermine” members of the administration). Now, following a $100,000 search, there is still no announcement whether or not Angela Henderson will be the new permanent Provost at Chicago State. How can she even be considered? I will argue that she should be categorically rejected as a candidate for this or any other administrative position and fired from the university.

There has been no affirmative defense of Henderson’s academic dishonesty. Excuses abound: she only forgot a few citations; she had her FERPA rights violated; the charges are nothing more than “allegations.” Also in response, the Chicago State administration has reportedly “gotten” copies of other faculty dissertations, including mine and Phil Beverly’s—obviously to examine those works for possible plagiarism. According to one administrator, the administration is currently looking at C.V.’s of past Provosts to determine how Henderson’s qualifications stack up against those persons. Of course, none of this addresses the issue of her cheating. In fact, she does not deserve to hold a position at this or any other university. She has not earned that privilege and she did not earn her Ph.D.

In order to support my contentions, I have quantified Henderson’s cheating. First, there a number of irregularities in her dissertation: obviously plagiarized sentences and passages, a “padded” bibliography and textual references. Although the PDF of the dissertation runs 149 pages, the majority of its textual material appears on pages 1-49. Since pages 4-10 are devoted to a discussion of the purpose of the study, the articulation of several hypotheses, a list of definitions and diagrams describing the study’s “conceptual model,” that leaves pages 1-3 and 11-49 (a total of 42 pages) as written text that includes a discussion of literature relevant to the study. An overview of the dissertation reveals that irregularities appear on 36 (85.7 percent) of those pages.

When I began looking at Henderson’s dissertation on December 14, 2013, I quickly realized that it was extensively plagiarized. Obviously, perfection is not the scholarly standard in any discipline although writers should take pains to insure that borrowed material and ideas are properly cited and that material appearing in the text should also appear in the bibliography. If I had found two or three passages that were incorrectly cited or one or two references that did not appear in the bibliography, I would have considered those to be simple mistakes—sloppy but not dishonest. However, what I found was a consistent and repeated pattern of sentences and passages that were obviously taken verbatim from other textual sources, without either quotations or page numbers. This pattern included obviously plagiarized material that I found on 28 of the 42 pages (66.7 percent) I referenced earlier.

In total, there are 45 full sentences and an additional 39 passages, some lengthy, plagiarized on those 42 pages. Henderson’s plagiarism ranges from simply failing to put exact language into quotation marks and referencing appropriate pages to the more serious offense of lifting whole passages from works that are ultimately not cited and presenting that material as her original review of the literature. The following table offers a page-by-page breakdown of the plagiarism in Henderson’s dissertation. I believe it speaks for itself: 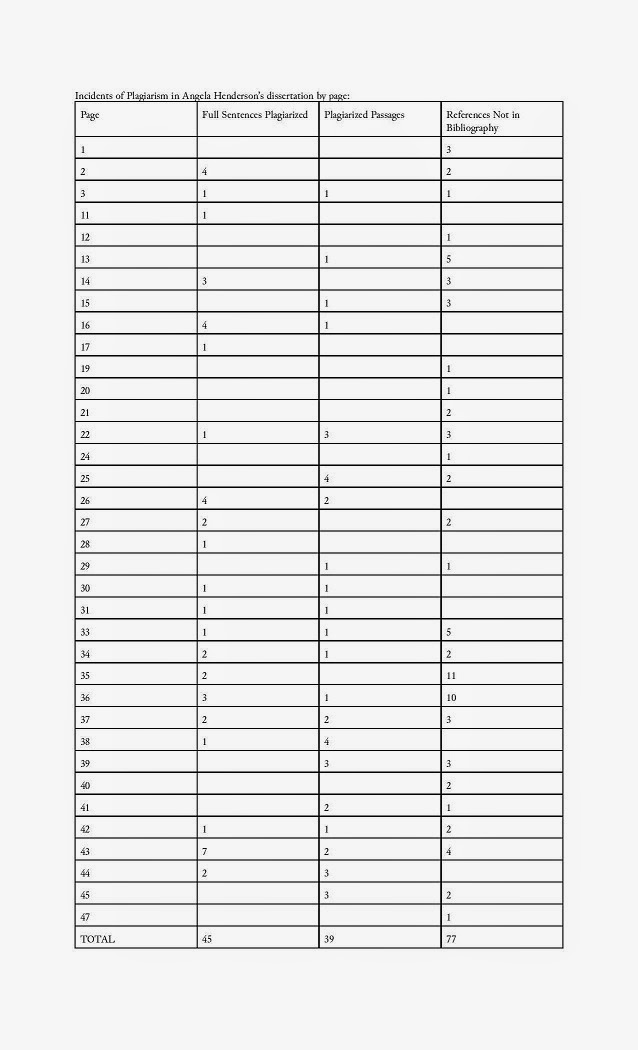 Almost all of the administrative rhetoric regarding this situation has been circulated in a back-handed way, often through the use of innuendo. In fact, Angela Henderson is not a victim in this situation. She submitted a doctoral dissertation rife with plagiarism and other examples of academic fraud. The University of Illinois at Chicago conferred upon her a degree she does not deserve, that she did not earn and now Wayne Watson seems poised to reward her for her perfidy. Just one look at the C.V.’s of the other candidates for the Provost’s job reveals Henderson’s unfitness for the position—plagiarism aside. However, it is difficult to imagine a scenario in which Wayne Watson would bring to Chicago State someone with academic and administrative credentials surpassing his meager achievements. This seems to leave only one option.